Construction has finally begun on a condo conversion of a historic five-story downtown building known as The Shelton. 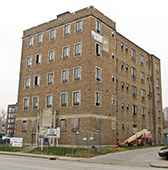 The 1926 building is getting a $3 million makeover. (IBJ Photo/Cory Schouten)

They will range from $130,000 for 650-square-foot
units to the mid-$200,000s for units larger than 1,000 square feet. The first should be available by
March, and completion is scheduled for May. The building originally contained 50
apartment units and was designed by an apprentice of Frank Lloyd Wright. Keystone
Construction is the general contractor.