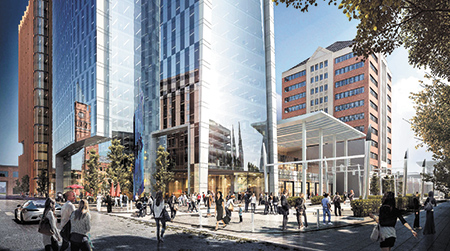 Indianapolis’ once-celebrated-but-now-underused Pan Am Plaza is the planned site of a $120 million, publicly funded addition to the Indiana Convention Center plus two privately funded Hilton-branded hotels that together would have more than 1,400 rooms.

The Capital Improvement Board voted on Friday to recommend construction of the convention center expansion and to work with Kite Realty Group Trust as the master developer on the project.

The resolution gives the CIB authority to work on a project agreement with Kite and an overall financing model.

The Kite plan was one of three submitted in March in response to the CIB’s request for proposals for another convention-style hotel with 800 to 1,000 rooms.

A key component of the project is a 38-story, 800-room hotel that would be developed by Kite and branded as Hilton on the northeast corner of the plaza at Illinois and Georgia streets. It would be Indianapolis’ second-largest hotel, behind only the 1,005-room JW Marriott that opened in 2011.

Kite plans to build a second, 600-room hotel, as well, which would be on the southeast corner of the block at Illinois and Louisiana streets. It also would carry a Hilton brand.

Neither Kite nor the CIB would release cost estimates for the hotels to IBJ. A hospitality industry consultant told IBJ earlier this year a hotel of the scale sought by CIB might cost as much as $350 million. As a comparison, the JW Marriott complex cost $450 million.

The publicly financed, 50,000-square-foot meeting space—which would become the largest ballroom in the city—would fill the plaza’s southwest quadrant and connect to the two hotels as well as the 556,600-square-foot convention center through an overhead walkway.

It would be funded with $120 million in bonds that would be paid off using tax-increment financing. TIF districts capture growth in assessed value, thus increased property-tax revenue, to cover the cost of new infrastructure or other government spending.

Kite would oversee the construction of the ballroom building, as well, but wouldn’t own it. Indianapolis-based RATIO Architects is the architect on the project.

Kite’s proposal won out over two others. City and CIB officials previously had not disclosed which developers responded to its request for proposals or what their projects would entail. However, Kite was widely speculated to be in the running because of the proximity of its site to the Convention Center.

Pan Am Plaza—which was built for the Pan American Games, hosted by the city in 1987—includes an office building on the northwest corner of the block, which will remain. The rest of the plaza is largely unused. It sits over an underground, dilapidated parking garage and was for years home to an indoor ice rink. It has served as a location for Colts pre-game activities and was the site of ESPN’s “Sports enter” program during Super Bowl XLVI, which was played at Lucas Oil Stadium.

But finding a new permanent use for the plaza has vexed city leaders for some time.

Thomas McGowan, president and chief operating officer of Kite Realty, said the company has been working for years “to prepare for this moment” and redevelop “what we believe is the best undeveloped site in Indianapolis.”

Kite Realty bought the plaza in 2008. The existing office building is owned by Sacramento, California-based Coastal Partners LLC, although that firm has listed it for sale. The garage below the plaza is owned by New York-based Dali Associates LP, which did not respond to IBJ’s request for comment as of press time.

IBJ reported in 2014 that Kite hoped to build two tower hotels on the site. That plan never materialized.

“We felt a great deal of responsibility to not simply do a project but to do an iconic project that addresses the highest and best use, which is a convention hotel,” McGowan said.

McGowan would not release total project costs for the hotels. He said “the numbers will continue to evolve” as the CIB negotiates a final deal with Kite.

But the $120 million city investment is the “estimated cost for public infrastructure” for the development of the site and the ballroom part of the project, said Thomas Cook, the mayor’s chief of staff.

The project would involve tearing down the underground parking structure, building a podium to support the two-story ballroom and additional meeting space, as well as general property acquisition costs, Cook said. The city also would build the climate-controlled walkway over Capitol Avenue to connect the Indiana Convention Center with the new complex.

“This is the next building block” of the convention center, which was constructed in 1972 and has undergone four expansions, Barney Levengood, executive director of the CIB, told IBJ. “Think of it as phase six.”

The city hopes to win approvals for the project within 12 months, setting the stage for groundbreaking in 2019. The construction is expected to take multiple years, but officials said it would not interfere with activity at the convention center. 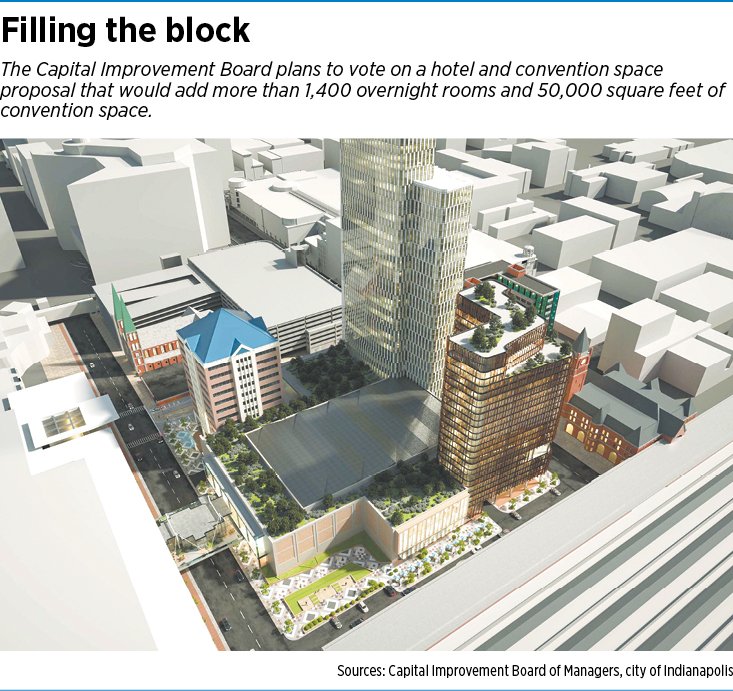 The project is meant to give the city’s tourism officials the ability to bid on larger events and retain current customers.

Chris Gahl, vice president of communications for Visit Indy, said the city is “in jeopardy” of losing conventions including the Performance Racing Industry Show, the FDIC convention, Gen Con, FFA and others if hotel inventory and ballroom capacity doesn’t increase.

David Hoppe, president of Gen Con, told IBJ in a statement that the convention was previously able to expand “to support a record number of guests” when the JW Marriott opened in 2011. That was around 37,000 guests at the time.

Already, another dozen downtown hotel projects with a combined 2,800 rooms are expected to come online in the next five years. But tourism leaders have said they need a convention hotel—one with a significant block of rooms connected to a large amount of meeting space—to be attractive to the largest events. 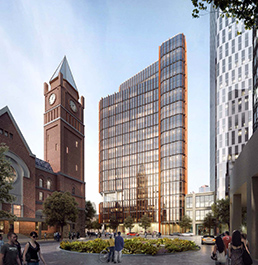 Research conducted by New York-based HVS Global Hospitality Services for Visit Indy found that downtown could absorb an 800-room hotel if it were accompanied by a 45,000- to 60,000-square-foot ballroom, either in the hotel or nearby.

For years, the downtown hotel occupancy has been higher than 70 percent. The study found that the rate could dip immediately after adding a 1,000-room convention hotel but would “bounce back” to 70 percent by 2024.

Gahl said adding the ballroom, which would be 40 percent larger than the giant 35,000-square foot Sagamore Ballroom at the Indiana Convention Center, would allow Indianapolis to host two citywide conventions simultaneously.

The additional space also could change the events Visit Indy pursues. Currently, the city is not able to bid on 208 large conventions because it does not have enough hotel rooms or ballroom space. The project would whittle down that number. 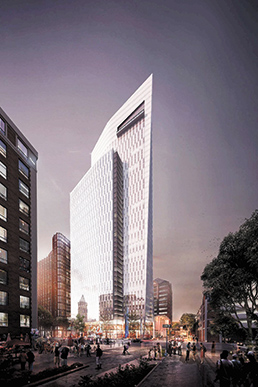 Ratio architects designed the project, including these two hotels, for Kite Realty.

Cook said supporting the development is in the city’s interest because “adding more in new conventions is where you see new dollars come in.”

The hotel and ballroom complex could create a sort of north and south campus feel for the city’s convention space. One convention could be taking place in the north area, which would include the JW Marriott and adjacent hotels as well as the Sagamore Ballroom, while a second convention takes place in the Pan Am Plaza hotels and ballroom.

“There are a lot of people who argue that if it’s not broke, don’t fix it,” Cook said. “You don’t become the No. 1 convention city by resting on your laurels.”

USA Today’s Readers’ Choice Awards in 2014 named Indianapolis as the top convention city. By square footage, it ranks as the 15th-largest convention center in the United States, according to Trade Show Executive.

Redeveloping Pan Am Plaza is also a historic opportunity for Indianapolis to build on its sports and tourism legacy, said Melina Kennedy, president of the CIB.

“It’s clearly a very attractive site in terms of connectivity to the convention center space, but also the opportunity to re-energize Pan Am Plaza, which is an iconic part of the story for Indianapolis of our leadership in the sports industry,” Kennedy said.

The $120 million for the public portion of the project is slated to come from two TIF sources, Cook said. One is the additional tax revenue generated at the site by the new development. That would fund about half of the payments needed on the bonds.

The other half likely would come from $8 million in annual TIF funds the city already funnels to the CIB for operations, which could be redirected to paying down bonds the city eventually takes out.

The City-County Council would need to approve the deal.

“We’re not allocating funds that currently go to something else,” Cook said. “It will be funds generated [by the project] and already going to the CIB, period.”

The ballroom would be publicly owned but would have an operating agreement with the hotels, allowing them to book the space when it is not being used for conventions.

“This would be a very unique public-private partnership,” Cook said.

Unlike the JW Marriott, Conrad and upcoming Keystone Realty Group Intercontinental project, it is “not necessasrily a given” that the city would have an equity stake in the hotels due to the unique financing of the project, said Taylor Schaffer, Hogsett's deputy chief of staff.

City officials have not ruled out asking the state to join the project. State tax revenue has helped fund previous convention center expansions.

The city previously had considered Pan Am Plaza for a big convention hotel. In 2007, Indianapolis-based Browning Investments, working with a Milwaukee developer, proposed building a 44-story hotel there.

But the city instead backed the $450 million JW Marriott hotel complex near White River State Park, which was developed by Merrillville-based White Lodging Services and Indianapolis-based REI Investments Inc.•