Home » Local company seeks to make Midwestern fans of kombucha, which is trendy on coasts 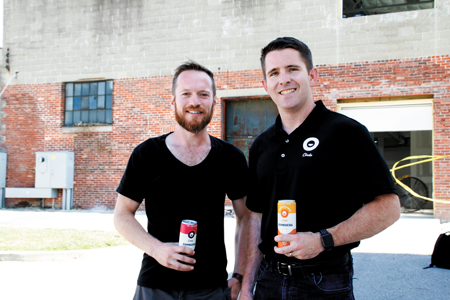 Indianapolis-based beverage maker Circle Kombucha wants to sell its signature product—carbonated, fermented tea—throughout the Midwest. There’s just one hitch: While kombucha (pronounced kumBOOcha, it’s the generic name for the tea) is already quite popular on the coasts, it’s mostly unknown in America’s midsection.

The company’s co-founder and CEO, Matt Whiteside, sees advantages and disadvantages in this. On one hand, locals have to be educated about his wares. On the other, Circle enjoys a more-or-less open field.

“Companies making these healthy beverages elsewhere just aren’t investing the time and finances in educating consumers in the middle of the country,” Whiteside said. “Our belief is that, if we spend our time and resources developing our own community, we might end up generating equal or greater demand than on the coasts.”

Circle, founded in 2015, is focusing both on expanding production and growing its Midwestern sales numbers. Currently, the company’s distribution domain consists of Indiana and every state that borders it.

Recently, it changed its name from Circle City Kombucha to just Circle Kombucha, to expand its formerly Indy-centric marketing efforts. It’s also moving into an approximately 14,000-square-foot headquarters and production facility at 1050 E. Washington St. The new digs include a fermentation “clean room” that could increase the company’s production by a factor of 10.

Circle also recently started packaging its product in 12-ounce cans instead of bottles. Besides being easier to handle and ship, cans also appeal to sports and entertainment venues, many of which don’t allow glass bottles.

“Cans have always been a packaging solution that we’ve considered at Circle,” said Skylar Williams, co-founder and head of product development and engineering. “We believe that cans make our product more accessible to people so that they can enjoy it everywhere they go, and easily make a better beverage choice.”

Aluminum is certainly a better choice from a financial perspective. The beverage industry news site BevNET reports that switching from bottles to cans could cut the company’s unit price from $3.49-$3.99 to $2.99.

When it comes to getting Midwesterners to drink an esoteric beverage like kombucha, every bit helps.

Though it’s a novelty in America’s heartland, kombucha has a long history elsewhere. According to Kombucha Brewers International, the drink’s trade group, it originated in China more than 2,000 years ago. It’s made by adding a combination of sugar, yeast and bacteria to tea. The yeast eats the sugar, creating both alcohol and carbonization. The bacteria then breaks down the alcohol into flavors that contribute to the drink’s somewhat acidic profile. 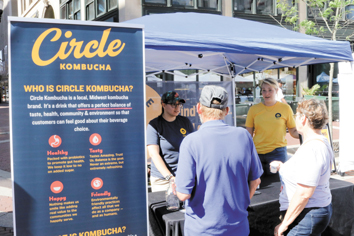 The final product (which Circle produces in ginger lemon, peach blossom, pomegranate and mango turmeric flavors) typically contains about half the sugar of a conventional soft drink, plus a suite of antioxidants and beneficial bacterial cultures, with only trace amounts of alcohol.

Creating the beverage is at least as complex as, say, brewing beer. With beer, you only have to worry about what the yeast does. With kombucha, there’s actually a second fermentation using bacteria. Circle (like other kombucha producers) is tight-lipped about its own proprietary fermentation techniques; the owners refuse even to state how long they ferment their product or how much they make.

“Kombucha fermentation is complex,” Williams said. “It is a largely misunderstood form of fermentation science. Many brewers are challenged with finding access to the proper resources and guidelines to produce it commercially.”

Interestingly, the beverage’s distribution process has more in common with that of milk and yogurt than of beer. Kombucha is a “raw,” unpasteurized product, meaning the compounds used to make it are still alive and kicking. It must be refrigerated during transportation and storage, lest all those microscopic critters start monkeying with the product’s flavor profile, alcohol level and CO2 content. It’s not unheard of for “warm” kombucha bottles to gas up so badly that they explode.

Still, such distribution foibles are par for the course in the vast non-alcoholic beverages niche, which includes everything from Coke and Pepsi to sparkling water—and, of course, kombucha. Numerous smallish companies are racing to service the exploding demand for the product.

“It’s a fast-growing category,” said BevNET reporter Brad Avery. “Kombucha was over $1.25 billion in sales last year in the U.S. market. It’s projected to reach anywhere from $3 billion to $5 billion in the next few years.” 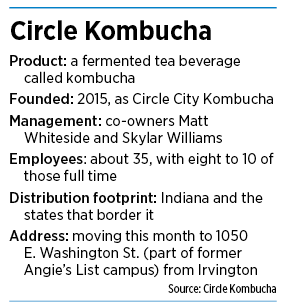 Granted, that’s serious money. But comparing it to the overall U.S. non-alcoholic drinks market, which will post revenue of more than $335 billion this year, puts it in perspective. Kombucha is hot, but it’s still less—far less—than 1% of the market.

However, that’s still a pretty substantial pond for a relatively small fish such as Circle to swim in. With most kombucha sales (and most of their potential competitors) focused on the coasts, Circle is the de facto first mover in the Midwest. Since day one, one of its biggest missions has been outreach and education—in other words, getting potential buyers to sample its wares.

Since its debut four years ago, the company has become a fixture at farmers markets—at first to boost cash flow, but now to increase its profile and garner product feedback. The founders continue doing it, because the community education provides excellent bang for the buck.

“The best thing we can do is get the product into people’s hands,” Whiteside said. “At a single farmers market, we can touch anywhere from 300 to 1,000 members of the community.”

There’s also talk at company headquarters about adding a tasting room to the new production facility.

“We’re first and foremost a beverage production company, but we do see benefits in letting people come in and see what we do and experience our product,” Whiteside said. “It’s something we’re looking at pretty heavily right now.”

More conventional forms of distribution are expanding nicely. Circle—whose distributors include Piazza Produce, Ideal Food Group, and Canteen—has placed its goods at about 400 locations, including restaurants, coffee shops and grocers such as Market District, Whole Foods and Fresh Thyme.

The company’s plans include gaining marketing and distribution leadership in the middle of the country and perhaps expanding beverage offerings beyond its current product.

“Kombucha’s been a great learning experience for us, but we’re also not going to shy away from opportunities to provide other healthy beverage options,” Whiteside said. “It’s not in our short-term plans, but 10 years out, I’d like to believe we’ll have found some other great options that we can provide our community.”•