Home » Indiana stocks fare better than most this year

The S&P 500 and Nasdaq have tumbled into bear territory recently, but many Indiana-based public companies have performed better than that during the market downturn.

Both the S&P 500 and the Nasdaq hit their lowest point of the year on June 16, plunging 23.55% and 32.76%, respectively, from their start-of-the-year prices before partially rebounding in the days to follow. But Bloomberg’s index of Indiana-based companies hasn’t dropped anywhere near that—its year-to-date low happened on Feb. 23, with a 10% drop from its start-of-the-year price.

In market parlance, a bear market happens when prices drop 20% or more from their recent highs.

Indiana’s relatively strong performance traces to two main factors: the type of companies that are—and aren’t—dominant in this state, and the strength of Indianapolis-based Eli Lilly and Co., one of the state’s largest public companies.

In addition, executives at Indiana’s public companies are fairly conservative, even within their respective industries, said Roger Lee, senior research analyst at Columbus-based Kirr Marbach & Co. LLC. That means the companies tend to have a steadier performance amid market fluctuations.

That growth mindset tends to be more dominant in the tech sector, which has hit a major slump this year after runaway growth the past several years.

Indiana is home to some tech-heavy companies, including Carmel-based KAR Global, which offers an online platform for wholesale buying and selling of used vehicles. But the state hasn’t had a publicly traded pure tech company since Indianapolis-based Interactive Intelligence, which was purchased by the California-based call center software firm Genesys in 2016.

Among Indiana-based companies, Lilly stands out as a particularly bright spot this year.

Lilly is one of those winners, Farra said, because right now it has a strong pipeline of drugs in development. Of special note is the drug tirzepatide, an experimental drug for treatment of obesity. In April, Lilly announced that patients who took the drug in a clinical trial lost up to 22.5% of body weight—significantly better results than those who received a placebo.

Farra pointed out that Lilly developed tirzepatide as a treatment for type 2 diabetes—meaning the company might gain from having multiple uses approved for the same drug.

“It’s got a pretty good insulation from a slowing economy, and it shows in its returns,” Humphreys said of Lilly.

Bloomberg’s Indiana index is weighted based on market capitalization, or market value—calculated by multiplying the number of shares outstanding by the price of those shares. So, the performance of a large company like Lilly influences the index much more than the performance of a small one.

At $309.4 billion as of June 24, Lilly’s market value is by far the largest among Indiana’s public companies. Second-place Indianapolis-based Elevance Health, formerly Anthem Inc., has a market value of $113.3 billion, even though its revenue is much higher than Lilly’s.

The only other Indiana stock to have seen double-digit growth this year is Fort Wayne-based Steel Dynamics, which closed Friday up 11.4%.

One reason Steel Dynamics is doing so well, Humphreys said, is that the company uses electric arc furnaces in its production processes—a type of technology that allows the company to start and stop the production line more readily, making it easier to adjust to fluctuating demand. “They don’t use the old heavy blast furnaces that have been around forever.”

The use of the newer technology has allowed Steel Dynamics to outperform peers like U.S. Steel, which uses both electric arc and blast furnaces, Humphreys said. 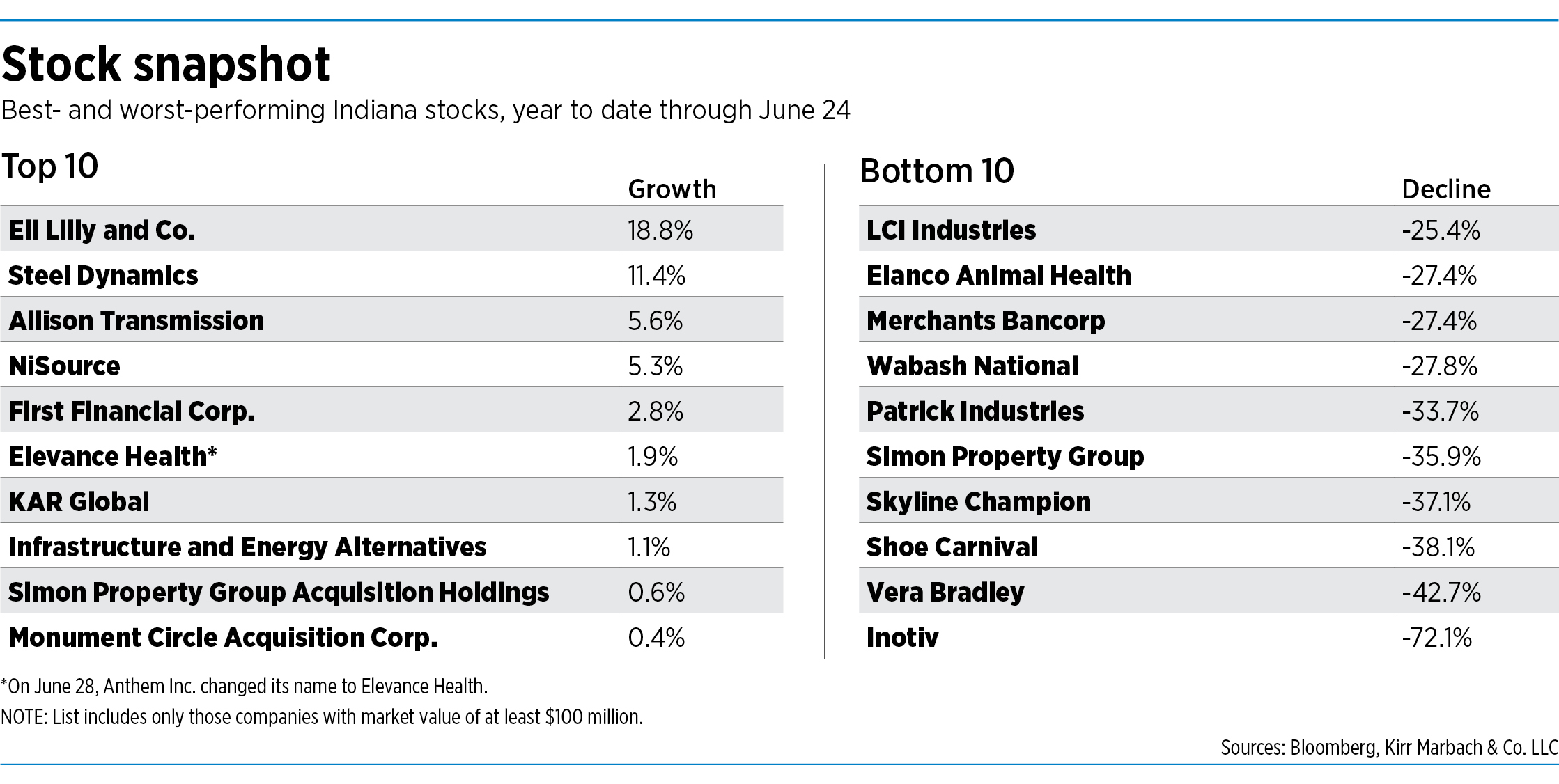 On the other side of the spectrum, many of the weakest-performing Indiana stocks are in the retail and consumer-goods sectors, which tend to be more sensitive to economic cycles.

RV sales have been booming since the start of the pandemic. But economic factors such as high fuel prices, rising interest rates and the fear of recession are likely taking a toll on RV makers’ stock prices, Humphreys said. “It may be tough selling an RV to somebody if they’re worried about gasoline prices and all that.”

Likewise, Indianapolis-based Simon Property Group, Evansville-based Shoe Carnival Inc. and Fort Wayne-based Vera Bradley Inc. were among the state’s worst-performing stocks. Simon is a real estate investment trust that owns and operates shopping malls, Shoe Carnival is a retail chain with 377 stores in the United States and Puerto Rico, and Vera Bradley sells women’s handbags, luggage, accessories and gifts. Their stocks are down 35.88%, 38.11% and 42.66%, respectively.

(Simon Property Group is a different entity from Simon Property Group Acquisition Holdings, which is a special purpose acquisition corporation. SPACs are publicly held shell companies created for the purpose of acquiring another company and taking it public. The Simon SPAC, and a handful of other Indiana-based SPACs, have held their value since the beginning of the year because they haven’t yet closed on acquisition targets.)

Retail and consumer-goods companies are especially sensitive to consumer sentiment, Lee said, and people might be adjusting their shopping habits out of fear of a weakening economy. “People are still shopping, but sentiment is definitely weakening,” he said.

Farra pointed out that consumer spending patterns shifted abruptly in May, moving more toward services and away from physical goods. That took retailers by surprise and meant they ended up with more inventory than they could sell.

A notable example from outside of Indiana is Minneapolis-based Target Corp. In early June, the retailer announced it was taking several steps to “right-size its inventory” amid “shifting consumer buying patterns and rapidly changing operating conditions.” Those steps, Target said, including taking additional markdowns, removing excess inventory and canceling orders for new merchandise.•