Whether Indiana lawmakers will cut business taxes in the 2022 session could be a $300 million question.

House Republican leaders want to reduce the personal property taxes businesses pay on equipment, claiming it is one of the last tax obstacles in recruiting new businesses and spurring growth for businesses already here.

House Republicans are specifically looking at cutting or phasing out the 30% depreciation floor. The floor requires businesses to pay a tax on at least 30% of the purchase price of machinery and equipment every year, even if the equipment is several years old and no longer worth 30% of its original cost. 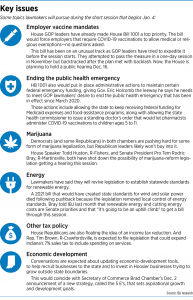 That move would reduce the amount businesses pay in property taxes on equipment from about $1.4 billion now to about $1.1 billion.

But it would pit the desires of the state’s largest business organizations against the concerns of local governments, which will oppose the move if there’s no provision to replace the lost revenue.

Already, the Indiana Chamber of Commerce has targeted a phase-out of the 30% depreciation floor as one of its top legislative priorities when the General Assembly convenes in earnest on Jan. 4.

Kevin Brinegar, the chamber’s president and CEO, acknowledges that Indiana ranks well in its business tax climate, thanks to efforts from the Legislature over the last decade. The state has cut its corporate tax income rate from 8.5% to 4.9% in stages, and in 2007 eliminated what was considered another property tax barrier—the tax on inventory.

Still, Indiana is competing against neighboring states with no business personal property tax on equipment, Brinegar said. Kentucky is the only neighbor with such a tax.

“The one thing where we still stand out negatively [in business recruitment] is the business personal property tax,” he said.

House Republican leaders are on board with the chamber. Speaker Todd Huston, R-Fishers, said during the chamber’s legislative preview last month that cutting the depreciation floor was “exactly the right thing to do” and called the personal property tax “the last bad business tax that we have.”

Lawmakers are considering tax cuts because Indiana is sitting on nearly $4 billion in cash reserves. The rich stockpile, partially due to the influx of federal stimulus money, triggered a $545 million automatic refund to taxpayers at the end of fiscal year 2021, June 30.

The Senate is not so sure about cutting taxes this year. President Pro Tem Rodric Bray, R-Martinsville, told IBJ he would like to wait to see how the post-pandemic economy performs before cutting taxes permanently.

“What I do not want to do to all Hoosiers is, decide that we have enough revenue and cut some taxes. And then as the economic realities kind of come to bear, then all of a sudden, we realize we’ve cut into the muscle,” Bray said.

He said he is still open to at least considering tax cuts, particularly phasing out the floor on equipment taxes. “The tax is a burden, right? But also, some of them are necessary,” Bray said. “And I do understand that the conversation now is about that business personal property tax, which is fine. [I’m] happy to have that conversation and see if that makes sense.”

Larry DeBoer, Purdue University economist and tax policy expert, said that, with all the other state corporate tax cuts over the years, it was clear the equipment tax would be on the chopping block eventually.

“Once we got rid of the inventory tax, I think I knew and pretty much everybody knew the next thing to go was personal property,” DeBoer said.

Indiana’s manufacturing sector in particular could reap a windfall from lowering the minimum depreciation levels on equipment. Cutting the 30% floor would encourage factory expansion by lowering the cost of bringing expensive equipment to Indiana, said Andrew Berger, senior vice president of the Indiana Manufacturers Association.

He said manufacturers in the state pay an average of $10,000 and up in equipment taxes each year.

“For a capital-intensive business, like manufacturing, that’s got a lot of equipment, you’ve taken that off the books, so that helps, kind of on a competitive basis. Immediately, you’re going to see a reduction in some tax payments,” Berger said.

The business personal property tax on equipment is self-assessed, and the rate varies by county. Altogether, businesses paid $1.4 billion in personal property taxes in 2020, DeBoer said. Losing the minimum depreciation level could reduce that total by about $300 million.

But reductions to the tax could mean higher property taxes for residential homeowners unless the legislators find another revenue source for local governments, he said.

Indiana’s tax caps limit the amount of property taxes to 1% of property value, so making up revenue just from that might not be a solid option, either, DeBoer said. 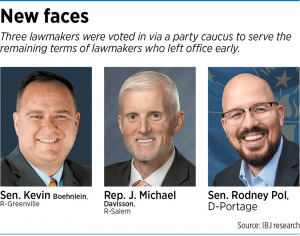 The equipment tax is also often abated by local governments as an incentive to attract a large business investment, so in some cases, communities are not taking in that full amount of tax revenue. Last year, about 10% of the gross assessed value of business personal property was abated across all 92 counties through economic revitalization programs, DeBoer said.

That is not the same as reducing the tax permanently, because tax breaks usually last 10 years; eventually, companies must pay the full tax.

House Ways and Means Chair Tim Brown, R-Crawfordsville, who is working to propose the potential tax-cut legislation, said discussions on what will be included in the bill are ongoing.

He said he is aware local governments are not on board with the idea of reducing business personal property taxes with no backup to replace the revenue. Brown said lawmakers are looking at whether the state would have to create a fund with the extra money in reserve to make up for lost revenue, or at how to best phase out the 30% floor.

“To make it sellable to 150 members of the General Assembly, we will have to talk about how to help local government,” Brown said.

Creating an additional fund is not the preferred option, he said, and added that property tax revenue already increases without legislative intervention because of growth in assessed value, which has risen about 4.3% over the
past five years.

Brown said the fact that many communities already give 10-year tiered tax breaks on equipment is an argument for looking at reducing the tax altogether. He said he thinks only a few local governments rely on it heavily.

Matthew Greller, CEO of local-government advocate Accelerating Indiana Municipalities, said he is generally against reducing or cutting the business personal property equipment tax without a stable source of replacement revenue.

He added that, while tax policy is one piece in attracting business, quality-of-life investments should be the focus. Local tax revenue is needed to make that happen, too, he said.

Cities like Kokomo, Fishers, Greenwood and New Albany have had resurgences and attracted development, Greller said, because of quality-of-life investment, not just state tax policy.

“I think if you just take a look around the state and see who’s doing well, you will quickly see that the reason they’re doing well is not because of tax abatement or even tax policy,” he said.

Christian Maslowski, president and CEO of Aspire Economic Development Johnson County, said tax climate is “one piece of the site-selection puzzle” for companies.

“You can’t compete on just being cheap and easy, because it’s still about talent. It’s about what businesses want in a place so that it’s where businesses and people want to be,” Maslowski said.

Brinegar said the tax should be cut and that other steps should be taken to make the state more attractive, including developing workforce talent and providing more access to child care.

“We think that this is prudent to do to continue to improve our business climate. But by far, it’s most certainly not the only area where additional investments could and should be made,” he said.•