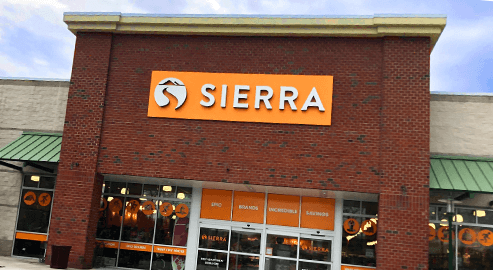 Sierra plans to occupy a 17,855-square-foot space just north of Interstate 465 at 10025 N. Michigan Road. The location formerly was home to an OfficeMax store. It’s in a strip of stores that includes Best Buy, HomeGoods and Marshalls.

A company spokesperson could not provide an estimated date for when the store might open.

Sierra has 66 stores in 25 states, including five in Illinois, five in Michigan, two in Ohio, and one in Kentucky. It offers outdoor and activewear apparel, footwear and gear from more than 3,000 brand names at discount prices.

Clothing brands on its website include Eddie Bauer, Hurley, Telluride and Columbia Sportswear, while it also sells a variety of cycling, hiking, camping, running, yoga and hunting gear.

Sierra began in 1986 with one 500-square-foot warehouse in Reno, Nevada. The company launched an e-commerce website—SierraTradingPost.com—in 1998, and it was known as Sierra Trading Post Inc. until 2019.