We’ll kick this roundup off with plans for a cidery on the near-east side.

• Ash & Elm Cider Co. has signed a five-year lease to occupy about 7,500 square feet for a production facility in the former location of Bob’s Thrift Store at 2112 E. 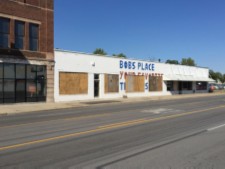 Washington St. The cider shop should be open early next year, said owners Aaron and Andrea Homoya, a husband and wife team.

An adjacent tasting room will be available in the former Oddfellow’s building at 2014 E. Washington St.

Ash & Elm, which has been previewing its ciders at various events, will expand with a full-scale operation that includes three 40-barrel fermentation tanks. It will offer multiple “house” ciders as well as seasonal options made from natural fresh-pressed apples.

• Big Lug Canteen is set to open Oct. 12 in the Nora building that formerly housed The Snooty Fox. Big Lug comes from Ed Sahm, owner of the local Sahm’s chain. He’s converting half the space at 1435 E. 86th St. into the microbrewery, with the northern portion operating as a Rockstone Pizzeria & Pub.

Sahm opened his first Rockstone in early 2014 at 11501 Allisonville Road in Fishers and followed up in June of this year with a Rockstone next to the downtown Sahm’s location in the historic Gibson Building at 433 N. Capital Ave.

• Nicey Treat is slated to open in Fletcher Place, in a space between Amelia’s and Bluebeard. The maker of all-natural, handmade frozen treats has a location at 916 E. Westfield Blvd. and also operates a food truck.

• Tilted Kilt Pub & Eatery, a chain of Celtic sports pubs known for its scantily clad, kilt-wearing waitresses, is set to open its second location in Indianapolis, on the northwest side in the Caribbean Cove Hotel and Conference Center near Michigan Road and Interstate 465.

Tilted Kilt should start serving customers by the end of the month, the Tempe, Arizona-based chain said. It will occupy 14,600 square feet and feature 35 beers on tap, as well as traditional pub fare such as fish and chips and shepherd’s pie. Tilted Kilt also has a downtown location, at 141 S. Meridian St.

• Ulta Beauty opened Sept. 11 at The Shoppes at County Line at 8811 Hardegan St. on the south side.

The Illinois-based chain has four central Indiana stores, at the Fashion Mall in Indianapolis, Village Park Plaza in Carmel, Hamilton Town Center in Noblesville and Metropolis in Plainfield.

• Breakout Indianapolis (an escape room) should open by the end of the month at 8455 Castlewood Drive, Suite A, just north of the East 82nd Street and Interstate 69 interchange.

The Breakout Games LLC also has locations in Atlanta; Louisville; Cincinnati and Dayton, Ohio; and Chattanooga and Knoxville, Tennessee.

Breakout Indianapolis is at least the second escape room coming to the city. Property Lines reported last month that The Escape Room is set to open downtown Oct. 2.

• The Art of Healing opened earlier this month in 3,000 square feet at 3019 Meridian Meadows Road in Greenwood, near the intersection of State Road 135 and County Line Road.