Home » Blogs » The Score - Anthony Schoettle » NCAA to IU: Can you hear me now? 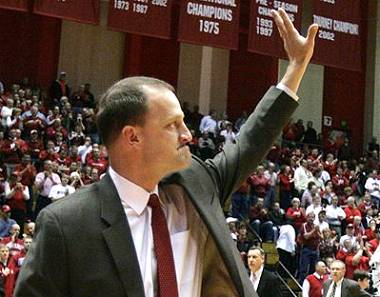 College hoops insiders said the school’s decisions regarding its basketball program haven’t sat well with the NCAA, and the selection committee’s seeding demonstrated that. Those same sources think the seeding might be a sign of things to come–namely, a 2009 postseason ban. This summer, the NCAA will determine what punishment will be handed to IU for alleged impermissible phone calls to recruits made by Sampson and his staff.

“I think there is probably a lot more involved in it than just winning and losing,” IU interim head coach Dan Dakich told reporters Sunday night regarding the seeding. “It doesn’t matter what anyone feels, it’s just a matter of what we have to do.”

Of course, there are those who would say Butler, which is ranked No. 10 in today’s ESPN/USA Today poll, was the victim of an even greater injustice with a No. 7 seed in this year’s NCAA tournament. And they are not the focus of any NCAA infractions.

Is IU’s seeding punishment for its association with Sampson, or is it merely a sign that the team is wobbling down the stretch?