Scientific rigor leads to solid research and critical discoveries. Dr. Christopher Leamon of Advanced Accelerator Applications, a Novartis company, and Dean Karen E. Bravo of the IU McKinney School of Law discuss the challenges of funding and conducting scientific research that gains the public’s trust and leads to societal advancements.

In an era when distrust is being sown about science and scientific institutions, what can researchers do to build trust?

CHRISTOPHER LEAMON: In both the academic and industry research sectors, scientific rigor and integrity are paramount for continued public support. I think there is an opportunity for leaders in the research community to remind the public of this by engaging in open discussion about the principles of scientific inquiry and ethical conduct, including their critical role in discovery. Messages emphasizing the importance of objectivity in scientific research and the directional value of data, even when negative, may help inform public opinion and rebuild trust. Similarly, leaders at the forefront of innovation could raise awareness around their commitment to quality assurance and the systems and policies in effect at their respective laboratories or organizations to ensure data integrity, or take corrective action in the event of an error. Underscoring these topics in public forums alongside the promotion of research outcomes may help counterbalance existing skepticism.

KAREN BRAVO: Researchers can contribute positively to public debate through intentional and educative dissemination of research findings and methodologies.

Researchers should go beyond their findings, to explain why and how the research was conducted. This can remind and educate the public of both the mechanisms of knowledge production and the evolutionary nature of knowledge production across time. Those explanations should include acknowledgement of the strengths and weaknesses of the methodologies used, and humility regarding the scope of research findings.

The discussions should be accessible and model the scientific method—rigorous and respectful debate that distinguishes opinions from factual findings.

Finally, university and industry researchers should explain potential social, economic, and other impacts of their work, while acknowledging potential negatives and positives, and soliciting feedback and critique.

Who should own the research conducted at universities but funded by public entities?

KAREN BRAVO: Ultimately, the research belongs to the public and is held in trust by the universities. However, universities must be allowed to expand the impact of their innovation through commercialization of discoveries and partnerships and collaborations with industry and government entities.

The Bayh-Dole Act of 1980 facilitates this. As a result of that legislation, universities and other recipients of government funding retain legal ownership of the intellectual property produced through their research, while having an obligation of timely disclosure.

By recognizing ownership in the research institutions, instead of the governmental entities, Bayh-Dole led to a flourishing of innovation that goes well beyond the universities. Institutions of higher learning were able to pursue greater innovation through commercialization of their research discoveries, often in conjunction with industry groups. Discoveries now are more widely disseminated, and more readily translated to daily use.

How effective are university incubators in Indiana at advancing discoveries from the academic bench to the clinic?

CHRISTOPHER LEAMON: In my opinion, Indiana’s university incubators have proven themselves successful in moving early discoveries into the clinic. For example, Purdue University has invested heavily over the past 20-plus years to support the start-up and development of over 250 new companies. One such company, Endocyte, Inc., represents a prominent success story through which novel cancer-targeted therapies licensed from a Purdue laboratory served as the basis of the company’s initial pipeline, leading to the initiation of 12 clinical programs.

How can academia and industry improve collaboration with respect to publication of early discoveries, while preserving intellectual property?

CHRISTOPHER LEAMON: It is widely recognized that the publication of early discoveries is critical to the career success and continued funding of academic researchers, however, the intellectual property resulting from such discovery is equally essential to the ability of industry sponsors to fully develop and commercialize such research. Reflecting on past collaborative experience, I have found reasonable compromise in having the academic institution file a provisional patent application and restrict the submission of any related manuscripts intended for publication for 12 subsequent months. This short restrictive period served to delay disclosure of the intellectual property until the patent document had been published. This modest delay also provided additional time to add new data that potentially strengthened the original patent application. In this scenario, academic researchers received credit for the publication of their work, as well as for the patent filing, and the sponsor benefited by maintaining secrecy of the invention(s) for an additional year.

In what other ways can universities ensure that the work of their researchers is broadly disseminated?

KAREN BRAVO: The mission of the university is to educate, and the work of university researchers contributes to that goal—education and the furthering of knowledge. Therefore, universities have a strong obligation to share research findings with the public. This is especially the case for publicly funded universities.

Universities and university researchers can disseminate insights and knowledge through a wide variety of methods: In addition to publication in academic and industry publications and circles, researchers can practice conscious outreach through the many channels now open to direct communication. These channels include, for example, newspapers, social media, magazines, congressional testimony, civil society groups, and TED talks.

How difficult is it to find research funding?

KAREN BRAVO: Research funding is limited so there is significant competition for available resources. As a result, many worthwhile projects may not be funded, or may be funded only after a significant number of attempts.

Research funding and research for interdisciplinary projects by universities is more crucial than ever before as we face pressing global challenges. One emerging and important example of the role of research universities like Indiana University is meeting the United Nations’ 2030 agenda for sustainable development. Universities are key to achieving the 17 Sustainable Development Goals (SDGs) adopted by all UN member states in 2015, and will play a crucial role through teaching, collaboration and interdisciplinary research and creation of evidence-based knowledge, among other things.

How have programs like the Indiana 21st Century grant program helped create and retain science-based jobs in Indiana?

CHRISTOPHER LEAMON: Having access to non-dilutive sources of funding, such as federal and state grants, is a very attractive option during the early stages of a startup organization, especially one focused on scientific research. Unlike federal grants, which are highly competitive and often have very long timelines for funding disbursement, state-funded grant programs such as the 21st Century Research & Technology Fund, launched in 1999, can effectively stimulate research and development efforts and reduce the outflow of local talent to different states. For example, the successful application for a $2 million grant from the State of Indiana in 2001 served as a financial bridge that allowed a fledgling company at the time, Endocyte, Inc., to create high-paying jobs, advance its first product into the clinic and attract additional investors. Without that grant, the company could have gone bankrupt. There is currently only one other such source of public funding available to entrepreneurs in Indiana. Budgets are challenging and additional resources are needed.

What are the challenges in Indiana of recruiting and retaining top R&D talent?

CHRISTOPHER LEAMON: Many of the more prominent research and technology centers in the United States are located on the East and West coasts of the country, where there are larger metropolitan cities with many elite academic institutions and multinational corporations, as well as ready access to diverse cultural experiences and major airports. Talent located in these markets often has misconceptions about the Midwest region and may not be aware of Indiana’s low cost of living and culture that focuses on family, community and education, or the growing diversity of cultural offerings. I have found that one critical key to success in recruiting and retaining talent is to promote an organization’s mission statement and values. Having an inspiring mission and living a culture of shared responsibility are key factors in attracting and retaining the best talent no matter where you are located.

How would you compare the value of scientific research with research in the humanities?

KAREN BRAVO: They are of equal value. My response is based on the understanding that “the humanities” includes the social sciences (e.g., sociology, political science, economics) as well as the humanities (the arts, culture, religion, history, philosophy, languages).

The dichotomy between the two is false. Both scientific research and research in the humanities and social sciences are essential to gaining understanding of the physical world and of the human condition.

However, as a result of the greater cost of scientific research—for example, the labs and equipment that are essential for research in genetics, medicine, physics, and chemistry— our society and economy appear to place greater value on the sciences. The funding available in those fields is greater than the sources directed toward the humanities and the social sciences.

Despite the allocation of more resources toward the sciences, research in the humanities and the social sciences plays an essential role in creating understanding of scientific discoveries and in successfully implementing and adapting the consequent innovation in the world outside the laboratory. For example, medical researchers and immunologists may make extraordinary advances in creating life-saving vaccines. Researchers in the humanities and social sciences will unearth factors underlying public attitudes to such innovations and facilitate greater understanding of their benefits. 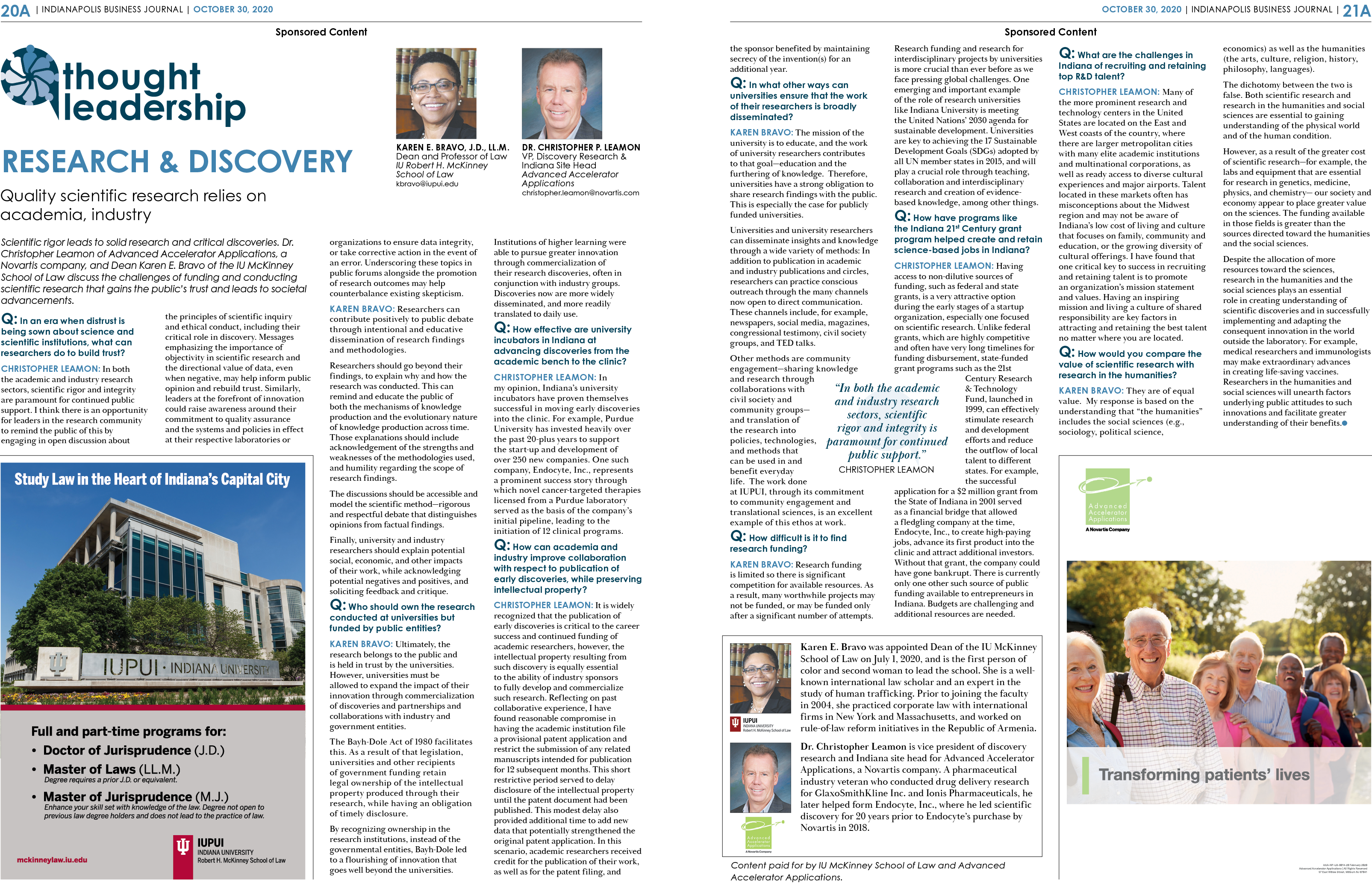 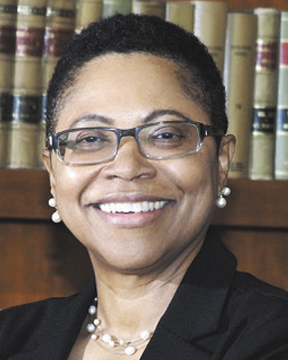 Karen E. Bravo was appointed Dean of the IU McKinney School of Law on July 1, 2020, and is the first person of color and second woman to lead the school. She is a well-known international law scholar and an expert in the study of human trafficking. Prior to joining the faculty in 2004, she practiced corporate law with international firms in New York and Massachusetts, and worked on rule-of-law reform initiatives in the Republic of Armenia. 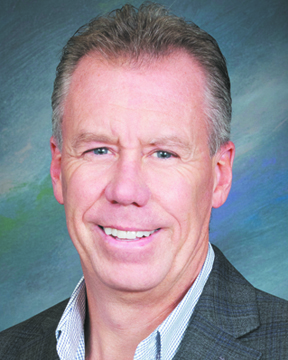 Dr. Christopher Leamon is vice president of discovery research and Indiana site head for Advanced Accelerator Applications, a Novartis company. A pharmaceutical industry veteran who conducted drug delivery research for GlaxoSmithKline Inc. and Ionis Pharmaceuticals, he later helped form Endocyte, Inc., where he led scientific discovery for 20 years prior to Endocyte’s purchase by Novartis in 2018.