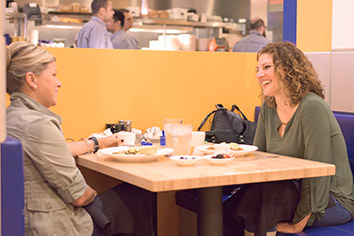 Breakfast chains a step above the likes of Bob Evans and Cracker Barrel are finding Indianapolis as comforting as a stack of blueberry pancakes.

A dizzying array of national outlets recently has entered the market, including Another Broken Egg, The Egg & I, and Wild Eggs, joining a plethora of other relative newcomers, including First Watch and Yolk.

“It’s widely believed that the market has been pretty wide open for full-service breakfast concepts,” said Gary Perel, a retail broker at Alo Property Group. “So you have this race to come in and establish yourself, and get dominant locations.”

Most have put down stakes in downtown Indianapolis, the northern suburbs or Keystone at the Crossing, where competition is particularly fierce.

IBJ.COM EXTRA
Check out a few of more than 50 area breakfast options.

And now Yolk, which in 2014 opened at downtown’s CityWay, is set to open in June in the Ironworks development at East 86th Street and Keystone Avenue.

“There are a ton of breakfast restaurants [at Keystone at the Crossing] already,” said John Koklas, director of operations for Chicago-based Yolk. “But we feel like we’ve got something different to offer than from what’s there.”

Yolk is most known for its Red Velvet French Toast and Eggs Benedict, Koklas said.

Louisiana-based Another Broken Egg, which opened at 96th and Meridian streets nearly three years ago, is eyeing sites downtown and in Fishers, said Jeff Blair, chief operating officer of the chain’s local franchisee.

“What’s going on here is happening nationally,” he said, “and that’s that breakfast was an underserved day part in the restaurant industry, and has been for years.”

Indianapolis has its share of local favorites. Besides Cafe Patachou, Le Peep has been around for decades and, more recently, the eclectic Milktooth has become a Fletcher Place destination. Other local fixtures include Lincoln Square Pancake House and Flap-Jacks, and numerous one-offs such as Speedway mainstay Charlie Brown’s Pancake & Steak.

But the national chains—backed by statistics from the National Restaurant Association—are confident there’s room for more. In 2015, 32 percent of family-dining restaurants cited breakfast as their most profitable part of the day, the association reported.

“At no point in time has breakfast not been popular; it’s just gaining more attention as of late,” said Annika Stensson, director of research communications at the Washington, D.C.-based organization. “It has a lot to do with comfort food, if you will. Who doesn’t like a good stack of pancakes at 4 in the afternoon?”

Wild Eggs is the latest chain arriving in Indianapolis. The Louisville-based company, which has seven locations in Kentucky and one in Denver, opened in February at 1438 W. Main St. in Carmel. Another location is scheduled to open this month in the Pulliam Square development at 310 N. Delaware St. downtown.

Jeffrey Rothberg, who founded Wild Eggs in 2007, decided to seek out the Indianapolis market when searching for expansion possibilities outside Kentucky.

“After looking at Indy, it was apparent it was the first place we wanted to open,” he said. “Indy is very active and vibrant, and we felt like it was the perfect location for us.”

Including its Keystone at the Crossing location, First Watch has opened four restaurants, including one downtown, since coming to the market in 2012.

Up to three more could be in the offing, said First Watch CEO Ken Pendery, though the company has yet to identify locations.

Founded in 1983, First Watch targeted Cincinnati as one of its first expansion opportunities, so opening in Indianapolis less than two hours away made sense, said Pendery, an Indiana University graduate.

He doesn’t regret taking the plunge, though the timing was less than ideal for the opening of the First Watch at 1950 E. Greyhound Pass in Carmel.

“You have this little construction project going on north of town,” Pendery said, referring to the massive upgrade to U.S. 31, “and that’s been a pretty rough existence. But otherwise, yes, it’s been good.”

First Watch now is toying with the idea of adding Bloody Marys and mimosas to its menu—alcoholic drinks that a few of its rivals already offer.

Cafe Patachou maven Martha Hoover brushed off the competition. She founded Cafe Patachou in 1989 and now operates six of them, in addition to Napolese, Petite Chou and Public Greens restaurants.

“National competition always follows strong, independent competition,” she said. “I have not seen anything negative at all.”•