Some of the city’s most generous participants in the Small Business Administration loan program barely cracked the
doors to their vaults in the past year.

MORE FROM IBJ
How did Indiana banks fare in the third quarter of 2009? Check out Peter
Schnitzler’s story in this weekend’s IBJ, available Saturday on newstands and IBJ.com.

Among the most active participants in the SBA’s popular 7(a) program in 2008,
the trio of Huntington National Bank, National City Bank and Chase originated a combined
total of $11.2 million such loans during the agency’s
2009 fiscal year, which ended Sept. 30. That was down from $31.1 million in 2008.

The total value of SBA-backed loans originated by Huntington dropped from about
$15.3 million in 2008 to $4.9 million, according to agency figures. Chase’s total sank
from $8.1 million to $1.9 million, and National City’s lending sagged from $7.6 to $4.4 million.

The declines may not come as a surprise given the horrific year suffered by the financial
industry, triggered in large part by imprudent lending. And many small businesses, staggered by the recession,
were in no position to plan pricey moves that would require more capital.

“The biggest reason for the decline was that demand was soft,” said Jean Wojtowicz, executive
director of the Indiana Statewide Certified Development Corp., a lender in another SBA program for financing
fixed assets like buildings and equipment. 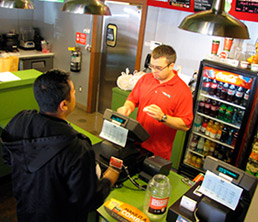 
The 7(a) program helps small businesses obtain financing when they might not be
eligible for loans through normal channels. The SBA does not make loans; instead, it guarantees
most of the value of loans made through commercial lenders.

“Businesses were a little bit apprehensive,” Wojtowicz said. “Some
of them were not interested in expanding; they were interested in surviving. And banks respond
to what businesses are asking for. They don’t peddle loans to people who don’t want them.”

However, small-business lending by Huntington, National City and Chase declined
much more steeply than that of many of their peers. In 2008, the trio accounted for 34 percent of the
$91.3 million in total lending for the 7(a) program in the nine-county Indianapolis area. In 2009, their
combined lending skidded to only 15 percent of the $75.8 million in loans issued through the program.

“The obvious thing is that we’re in the middle of a credit crunch,”
said Marianne Markowitz, Midwestern regional administrator for the SBA.

Markowitz hesitated to draw any conclusions about individual banks. “Every bank is affected differently
depending on their loan portfolio,” she said. “Of course they have to be conservative. They
got here by not being conservative. They need to be diligent in their underwriting process.”

New York-based Chase, Cleveland-based National City and Columbus, Ohio-based Huntington were the city’s
first-, second- and fourth-largest banks in the Indianapolis area, respectively, in 2008, according to
IBJ’s most recent list of the region’s largest banks and thrifts. The banks were ranked
by number of local full-time employees.

Local Huntington and Chase officials maintain that they haven’t significantly changed their strategies
or credit standards for SBA lending. Instead, they point to decreased demand for small-business loans.
In addition, some potential clients found themselves in more dire financial straits in 2009, said Mike
Newbold, regional president of Huntington Bank in Indiana.

“They may have been credit-worthy 12 months ago, but if they were unable to adjust to
the downturn, they may not qualify even under the same underwriting guidelines,”
Newbold said.

Tim Oliver, senior vice president and central Indiana market manager for Chase Business Banking, noted
that Chase looks at many lending vehicles for its clients, and that, in 2009, SBA loans “weren’t
the ideal solution in as many cases [as in 2008].”

The circumstances for National City Bank were slightly different than those of its two compatriots. National
City was acquired by Pittsburgh-based PNC Financial Services Group Inc. on Dec. 31. (The 77 Indianapolis-area
branches still carrying the National City name are expected to be rebranded in 2010.)

Prior to the Dec. 31 purchase and then as a division of PNC, National City originated 23
SBA 7(a) loans worth about $4.4 million for businesses in the Indianapolis area during the 2009 fiscal
year—a 43 percent drop in value from 2008.

PNC spokesman Fred Solomon declined to speculate on the reasons behind the reduction in local 7(a) lending
from 2008 or PNC’s level of participation in the program going forward.

“PNC will continue to be an active lender to small businesses,” Solomon
said, noting that the bank as a whole originated more than $900 million in small-business loans, including
SBA lending, in the third quarter of 2009.

Like much of the financial industry in late 2008 and early 2009, SBA lending sank
in the muck of the recession and spun its wheels. However, it found better traction
after the American Recovery and Reinvestment Act went into effect in March.

Portions of the act were designed to make SBA lending more attractive, including eliminating
fees for borrowers and raising the agency’s guarantee from 75 percent to 90 percent.

Lending rebounded in a big way—to an average of $8.6 million a month from April to September,
compared to $4 million per month from October 2008 to March 2009.

“We’ve seen instant traction at the smaller community banks,” she said. “They
have been able to pivot and grab onto these programs more quickly. … In this particular economy,
the small banks are the strength of the network.”

The federal funding that makes the Recovery Act provisions possible is expected to last through December,
Markowitz said.

Central Indiana’s small-business community appeared to fare better than the rest of the country during
the SBA’s 2009 fiscal year. The 7(a) program’s total dollar volume nationwide dropped from $12.7 billion in 2008
to $9.3 billion in 2009, a reduction of 27 percent. Indianapolis recorded a 17-percent drop, from $91.3 million to $75.8 million.

‘We just gave up’

One local small-business owner who recently sought an SBA loan said his reception from banks was less
than welcoming.

“It’s been very hard to get loans,” said Travis Sealls, co-owner
of the Pita Pit franchise at 1 N. Pennsylvania St., which opened in March. “We
just gave up on the whole thing.”

Looking for a loan to get the business off the ground, Sealls and a silent partner
contacted about a dozen banks in mid-2008 to talk about lending opportunities.
Only a handful returned their calls, and most said that their terms had become more restrictive. The
only serious offer that they received demanded that they deposit $300,000—the
full value of the loan—at the bank as collateral, Sealls said.

“It used to be that the worst-case scenario is that you’d only have to put down 30 percent,”
he said. The partners had the capital to fulfill the requirement, but decided against taking the loan.

Going ahead with plans to open the eatery, they hired a broker to look for borrowing
opportunities. They again received a single offer—an $185,000 loan through
Old National Bank in April. Again, they decided to pass.