Your local miniature enthusiasts are a great resource for learning to build a dollhouse, but don’t expect them to know
anything about the IRS’ new filing requirements for tax-exempt organizations. 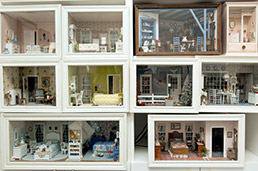 Many chapters of the National Association of Miniature Enthusiasts are as small as the models on display at its
Carmel headquarters. Persuading chapter leaders to fill out new tax forms has been a challenge, association leaders say. (IBJ
Photo/ Perry Reichanadter)

“They don’t even want to deal with it,” said Kim Ash, office manager for the National Association of Miniature
Enthusiasts. The Carmel-based organization has more than 200 chapters across the country.

Many of those chapter presidents have received at least one notice since 2007 from the IRS, telling them they need to file
an abbreviated form 990—or risk losing their tax-exempt status.

Until 2007, groups with less than $25,000 in revenue had no annual reporting requirement. Larger groups that were required
to file wouldn’t necessarily have their tax-exempt status revoked if they failed to do so.

IBJ.COM EXTRA
Click here for ways to learn about not-for-profits.

Now the IRS will yank tax-exempt status from any not-for-profit that fails to file three years in a row. May 17 marked the
first three-year cut-off.

It’s not clear yet how many groups had their status revoked because the IRS won’t start sending out notices until
January 2011. The not-for-profit research group Guidestar predicted the number would be 350,000 to 400,000. On the high end,
that would represent 25 percent of the 1.6 million organizations nationwide.

After May 17, the IRS said “many” organizations had not filed, but it would attempt to help them avoid losing
tax-exempt status. IRS Commissioner Doug Shulman issued a statement urging organizations to go ahead and file, even after
the deadline had passed.

One benefit of the IRS’ new file-or-lose-it rule may be a clearer picture of how many not-for-profit organizations
actually exist. Unless someone notified the IRS of a group’s dissolution, it would stay on the tax-exempt list indefinitely,
IU professor Kirsten Gronbjerg said.

“There’s always been concern that there were a number of defunct organizations on the listing,” said Gronbjerg,
who is affiliated with the Center on Philanthropy in Indianapolis.

New not-for-profits are created every year, so the total from the IRS database gives the impression that
the sector continually expands. In reality, Gronbjerg said, it’s losing and gaining organizations, just like the for-profit
sector.

“We’ve had a good deal of concern in the media about explosive growth in non-profits,” Gronbjerg said.
“I think it’s probably useful to know whether or not it’s real growth.”

Indianapolis-based consultant Dave Sternberg said most of the evidence about turnover in the not-for-profit field is anecdotal.
During the recession, for example, fund-raising professionals assumed human-service providers fared better than arts groups,
he said. The theory was that human-service providers attracted more donations because they were filling an immediate, overwhelming
need.

If more arts groups than food pantries fall off the IRS rolls, that theory might prove to be true. It would also go against
the long-held assumption about human services that it spawns many grass-roots organizations, which prove to be short-lived.

It’s a job he prefers to leave to the academics. “The things that plague non-profits on a daily basis are not
impacted by how many [organizations] are out there.”

Organizations that lose tax-exempt status—which is important for attracting donations—will have to reapply, which
can be a lengthy process.

Jim Simpson, managing director at Financial Technologies and Management in Indianapolis, thinks most of those that lose their
status are defunct anyway. “Do you think they’ve taken the time to tell the IRS they dissolved?”

Those that fall through the cracks are likely to be small, volunteer-run organizations, said Simpson, who trains not-for-profit
and religious sector on accounting and technology. Think parent-teacher organizations and hobby clubs, he said.

The IRS tried to head off the problem by sending out more than 650,000 notices, starting in 2007, to the small organizations.

The notices created little waves of panicked phone calls at the National Association of Miniature Enthusiasts office, Ash
said, but the staff in Carmel easily walked chapter leaders through the process.

“We try to keep them up to date as much as possible,” she said.

What the smallest groups have to file is essentially an online postcard, listing a principal officer and address, and confirming
that gross receipts are less than $25,000.

Many organizations did catch on and have filed since 2007. The IRS website lists hundreds of local groups, from the 151st
Infantry Alumni Association to the Zonta Club of Indianapolis.

Karen Kennelly, an Indianapolis CPA who advises not-for-profits, said the new form is not burdensome.

“It’s just a few questions that basically say, ‘I exist.’”•