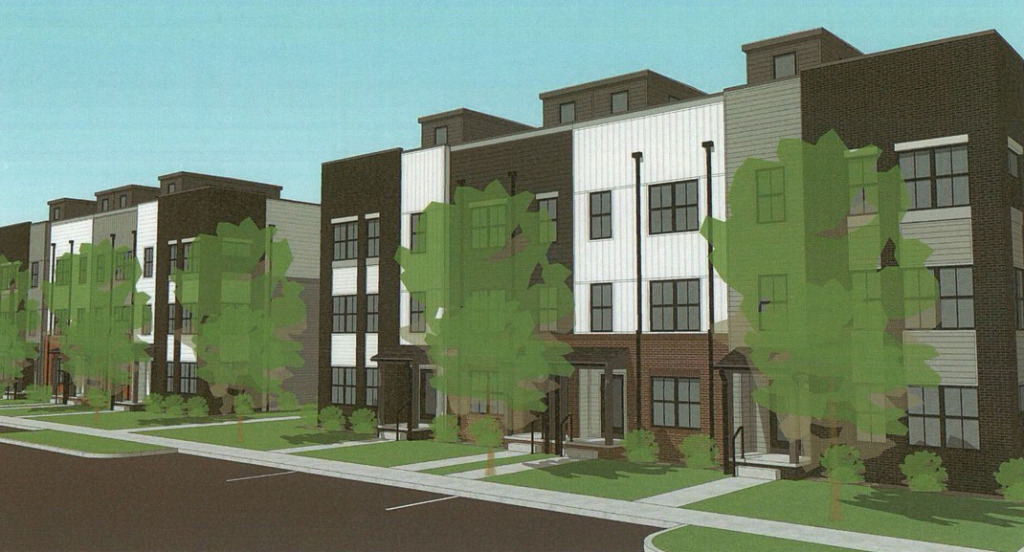 The Monon 21 development would sit adjacent to the Monon Trail. (Image courtesy Onyx+East)

Local developer Onyx+East plans to spend about $21 million to develop more than 50 townhomes on the near-north side of Indianapolis.

The firm is seeking city approval for the project at 2060 Yandes St., which is expected to feature nearly 50 townhouses and four single-family units.

The Monon 21 development would sit adjacent to the Monon Trail, the north-south bicycling and pedestrian route that has been a magnet for retail and residential projects over the last two decades.

Onyx+East has the 3.6-acre parcel under contract pending approval from the city to rezone the property from the I-3 industrial district to a D-P, planned development, designation. The Metropolitan Development Commission continued the request to its Nov. 17 hearing. If approved there, it would require additional approval from City-County Council.

In a filing with the city, the developer said the objective of the project is to “provide opportunities for new home ownership and private investment in the Near Northside and the Monon area.”

The four single-family homes, according to filings, would range from 2,007 to 2,187 square feet over two stories. They would have about two to three bedrooms and up to three bathrooms, along with detached two-car garages. The homes are expected to cost $270,000 to $285,000.

Onyx+East plans to build at least 47 townhouses—the figure in public filings calls for 50 units—across 10 buildings. The units would range from 1,270 to 2,187 square feet and have two to four bedrooms and two-and-a-half to three bathrooms. Each unit would have attached garages, with the smallest units having one-car ports and the rest accommodating two vehicles.

The breakdown of the units would be as follows:

Onyx+East plans to build out extensive infrastructure on the land, with an extension of 21st and Alvord streets, along with upgraded landscaping planned for most of the surrounding streets. The development will include new sidewalks, with connections to Alvord Street and along the west side of Yandes Street. A connection to the Monon trail is also being considered.

The homes would all be simple-fee units, with homeowners owning the land beneath the units. They properties would be part of a homeowners association that would maintain the exteriors, common areas and new green spaces.

This is the third project Onyx+East has sought approval for in the near-north neighborhood in recent years. In 2020, it won approval for an $11.5 million, 37-unit townhouse development at Alvord and 19th streets called Monon Roots.

The architect on the Monon 21 project is Rottmann Collier Architects Inc., based in Indianapolis.