“I capitalize off of people’s mistakes,” Schmitt said.

The 54-year-old president of Rawhide Golf Ball Co. runs a business that recovers dimpled pills from golf course water hazards, buffs them up, and resells them. Each year, Rawhide, in a couple of nondescript farm buildings just outside Evansville, fishes approximately 1.5 million Titleists, Top Flites and Nikes out of the drink, servicing roughly 150 golf courses in Indiana, Illinois, Kentucky, Tennessee and southeastern Ohio. 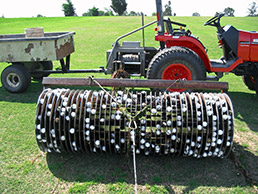 Sometimes divers fish out the balls, but most are collected using a novel, remote-retrieval system that turned Schmitt’s company into one of the biggest of its kind in the Midwest, if not the entire United States. That makes Rawhide a very big fish in a fairly small, brackish, pesticide-choked pond.

It’s not hard to understand the business case for rescuing golf balls from early, watery graves. There are approximately 17,000 courses in the United States and perhaps 25 million people who call themselves golfers.

And a lot of them aren’t very good, judging from the fact that an entire industry devotes itself to recovering the millions of expensive balls they hook and slice into water hazards. The idea is to reclaim those pricey bits of athletic gear (a set of a dozen Titlist Pro V1s, for example, goes for around $70 new), and resell them at a still-substantial price.

Across the nation, dozens of companies ply this trade, most using scuba divers to collect the underwater booty. Statistics on the size of the industry are nonexistent (this isn’t the sort of profession that keeps a trade association), but a Sports Illustrated article from way back in 1969 described it as a “$1 million a week business.” Four decades later, successful divers can make as much as $100,000 a year.

But it’s a treacherous living. The typical golf course water hazard is dark, weed-filled and spiked with fertilizer, herbicide and insecticide runoff. Divers who brave them grope blindly for balls, running the risk of encountering everything from broken bottles to fishhooks to alligators (happily not a problem in Indiana), snapping turtles and snakes. Deaths aren’t uncommon and usually happen when a diver unexpectedly runs out of air, panics and becomes fatally entangled in the dive weights and sacks of balls he drags around.

“Every year, it seems, there’s a drowning somewhere,” Schmitt said.

He started out in this risky business pretty much the same way everybody else does—by swimming for balls. Schmitt got into the trade in 1975, right out of high school, wading the edges of the ponds on the southwestern Indiana golf course where his parents played.

The 5 cents he earned for each recovered ball helped him become a certified diver, purchase scuba gear, and add more golf courses to his retinue. By the time he graduated from Ball State University, he was working 10 of them, supplementing his day job as a geologist for the petroleum industry.

By 1993, his client list was so long that Schmitt decided to quit geology. His discovery of a new, less-dive-intensive ball-harvesting system made it possible. He found a Chicago-area outfit that used a pair of tractors to drag roller disks across pond bottoms, collecting errant balls the same way terrestrial ball-collecting carts scoop them off driving ranges. In perfect conditions, one of his disks can scoop up 900 balls in one pass—and no one goes into the water.

Today, Rawhide (named after the old TV show) gleans about 90 percent of each year’s product from the tractors. Most of the company’s course contracts are handshake deals. Schmitt confines his operations to within 250 miles of his home base, and uses only one disk-and-tractor team.

The hauls he extracts from water hazards speak both to the profligacy and the inaccuracy of the average golfer. Generally, public facilities produce bigger numbers than private clubs, because they get more use. Schmitt usually only “harvests” each client course once a year.

“I was a pro golfer in Florida for 22 years, and down there they use divers almost exclusively,” said John Davison, Saddlebrook’s head golf professional. “I like this method better. It’s going to get more balls, because your visibility in these lakes isn’t very good. The divers have to go by feel, and it takes them longer. With this process, they’re in and out within a day.”

Davison, and his associates at other courses, allow retrieval operations into their carefully manicured domains because getting balls out of lakes is a win-win proposition.

Schmitt, depending on the quality of his take, gives the courses 6 to 10 cents of “store credit” per ball. The course then uses that credit to restock its driving range cheaply from Rawhide’s catalog, and perhaps even to shelve a few of its top-quality “experienced” balls in the pro shop.

It sounds like a smooth, well-oiled profit machine—one of the reasons so many amateurs take a shot at the field. But it isn’t. Schmitt likens his job to farming. Anything from weather to the economy’s ups and downs can ruin an entire season.

Preparing Rawhide’s wares for resale also is a prolonged, labor-intensive process. Balls that are disfigured, discolored or obviously have spent a lot of time underwater are worth considerably less.

“Generally, the lower half of what comes out of the lakes, regardless of whether it’s 100,000 or 1 million balls, you’re going to break even on those,” Schmitt said. “So you only make money on the upper half.”

The “upper half” are top-name balls in good condition. The balls Rawhide retrieves are taken back to the shop, cleaned and hand-graded.

The best of the best may go for half their original retail value. The worst are sold for almost nothing as “shag balls.”

“We have people buying those things up 600 balls at a time at a dime a ball,” Schmitt said. “They hit them out into rivers or fields and forget about them. Whatever. Just don’t hit them on a golf course, because I don’t want to see them again.”

While a large portion of the balls Rawhide recovers are bound straight for a driving range, a fair number of the better ones make it back onto the course.

During the past few years, with the economy in the rough, the average duffer has shown much less hesitation to whip out a used Titleist in front of his buddies. There’s some evidence that the play of pond balls is slightly degraded, but not enough, Schmitt contends, to be a problem for the average duffer.

For instance, most modern balls with undamaged outer surfaces are pretty much immune to waterlogging.

“I think they are fine for use,” added Pat Bayley, PGA professional at Swan Lake Resort in Plymouth. “I have not used one in a long time, but I probably would if it were the ball that I am currently playing. Given the construction of today’s golf balls, I would not see any decrease in playability.”

While Rawhide’s disk-and-tractor system gets most of the balls, sometimes the presence of underwater aeration systems, electrical lines or other such issues makes its use problematic. 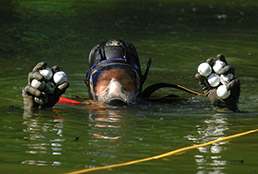 And sometimes courses with lined ponds don’t want to risk a puncture. In such situations, Schmitt puts on his scuba kit and does things the old-fashioned way. Last year, he brought up his biggest haul ever from a lined water hazard near Nashville, Tenn.

Schmitt dives alone, often at night when the course is closed, without a diving partner or even a spotter on the surface. Having a dive buddy is useless, he contends, because underwater he couldn’t see a companion if he were 6 inches away.

And someone on the surface wouldn’t know he was in trouble until it was too late to help. So, instead, he makes sure he has a steady supply of air (using a surface compressor that feeds him via a line called a hookah) and knows how to drop his dive weights and bags of golf balls (each of which can weigh 90 pounds) quickly.

“The scariest part is suddenly getting into a situation where you’ve only got a split second to think about what to do as you’re starving for air,” he said.

Though he’s never found a human body in a pond (something that happens pretty regularly to ball divers) and never tangled with an alligator (Rawhide doesn’t work that far south), he’s had plenty of encounters with leeches, to which he’s allergic. He wears a complete wetsuit to keep them off his body and a full-face mask to prevent them from latching onto his lips.

“I hate leeches,” he said. “One leech bite on me means I’ll swell up like a balloon wherever they bite me.”

But he’s not about to give up diving. For one thing, he says, it keeps him fit. For another, it gets him out of the office—a place where he spends perhaps 70 hours a week during spring and summer, overseeing three shop employees plus two tractor operators.

For that reason, he harbors no grand expansion plans for Rawhide. In fact, the operative word for the next few years is to “maintain.” Schmitt said the company brings in about half a million yearly in sales.

“The net profit is very little,” he said. “It pays payrolls, pays overhead and everything else. It’s almost like a non-profit organization. It’s not what people think.”

His side businesses include equipping other golf-ball-retrieval outfits (those well out of his sales territory, that is) with his own version of the custom-built disk-and-tractor system.

The price of just one unit is around $100,000—a high financial barrier to many of the field’s seat-of-the-pants operators.

Schmitt’s sold on the concept, but doesn’t plan to give up diving anytime soon. The sheer adventure will keep him braving the leeches and the broken glass and the agricultural runoff for the foreseeable future.

So far, he’s had no problems.