Home » Command center being built at WRTV will run 19 stations

Media giant E.W. Scripps is building a multimillion-dollar master control facility at its WRTV-TV Channel 6 that will control all 19 of Scripps’ U.S. television stations.

IBJ.COM EXTRA
See what happens at a video hub.

The Cincinnati-based broadcaster declined to specify the amount of the investment other than to say, “It’s a very nice investment in our Indiana station.”

But Thurber likened the scale of the project to that of a mission-control room, with its banks of computer consoles and a giant video wall. 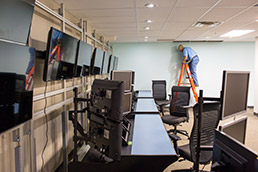 Technicians sitting behind consoles in Indianapolis will make sure the testimonials from residents at Morningside House nursing home air on Baltimore’s WMAR-TV during the next commercial break.

And next time Scripps’ KSHB-TV in Kansas City runs another report on a UFO spotted by an airline pilot, you can bet the Indianapolis facility won’t let those crafty aliens cause picture pixilation, as they’re fond of doing.

“What we’re doing is simply monitoring and controlling those things” ordinarily done at the station, said Tim Boling, director of engineering at WRTV.

The facility will be the largest but not the first video hub locally.

WISH-TV Channel 8 for at least a decade has served as a regional master control for several LIN Media stations, including those in Fort Wayne, Lafayette and Terre Haute.

Such centralized master-control facilities can reduce the number of control-room personnel at individual stations—cutting expenses for station owners.

A longtime veteran of using such master-control hubs, Media General, was able to reduce to “1.3 people” per station versus the five to six that had been required in a conventional station control room, reported the trade publication TVTechnology.

Hubs are also said to be less costly than adding certain automation equipment. Humans can spot errors that computers can’t easily discern, and they can take action quickly to work a problem.

That Scripps would choose Indianapolis for the facility, given that it owns stations in larger markets such as Denver and Baltimore, is in part due to the technical talent in the city, Thurber said.

ABC affiliate WRTV, which was purchased by Scripps about three years ago, had been a regional master control hub for previous owner McGraw Hill. Scripps didn’t have its own hub before buying WRTV and other McGraw Hill stations.

“We chose Indianapolis because they’re very, very good at what they do. We’re expanding a hub that’s already been in existence for years,” Thurber said.

Thurber also said the International Brotherhood of Electrical Workers, which represents employees at WRTV and rival WTHR-TV Channel 13, has been a good partner in the project.

The union has been lamenting TV job reductions in recent years due to increased automation, including the use of robotic cameras.

Recently, WTHR informed its technical staff that there could be job reductions as the Dispatch Broadcast Group station becomes the last in town to dive deeper into automaton. One WTHR worker said 20 technical jobs could be on the line at WTHR.

Back at Scripps’ WRTV, there are now about eight technicians working at the hub created years ago to serve a handful of stations under former owner McGraw Hill. That total will rise to about 18 or 19, Thurber said, as the facility is completed and running up to speed—perhaps as early as July.

The Scripps master hub at WRTV will involve a milder form of hubbing—also known as centralcasting. Local stations will continue to create their own local program schedules and produce commercials and place them in their own video servers. They’ll continue to download their own network and syndicated programming from satellite feeds.

The Indianapolis facility won’t provide content, per se, as much as simply controlling the content on hand at local stations. It will follow their programming dictates and make sure programs follow the station’s schedule. And local stations can always intervene—taking control during breaking news, for example.

But the hub will be especially helpful during variability in network programming. For example, a hub technician responsible for multiple stations will keep an eye out for a cue during a live network show, such as ABC’s “The View,” for a commercial break. The technician will make sure commercials at stations he controls start rolling on cue.

Because the hub also notes when the network show took a commercial break during a given day, it can use that timetable to program video servers at Scripps stations in western time zones to roll commercials at the proper intervals when the same network show airs later in the day in the West.

The Indianapolis hub also will monitor the signal quality of each Scripps station, and intervene when necessary. Hub technicians will even monitor the images flowing from each station to cable and satellite operators. If the output is interrupted, the hub can help find another route to bypass a trouble-prone video connection.

What the WRTV facility will not do—unlike some hubs—is download network and syndicated programming and send it to individual stations over high-speed networks. Scripps stations will continue to download their own programming.

That’s in contrast to LIN’s regional hub at WISH-TV. On the roof of the station are numerous dishes that pull down satellite feeds of syndicated shows aired on LIN stations in its territory. The WISH hub then transmits those programs to local stations so they don’t have to devote staff to handling that task.

Back when LIN set up the hub at WISH years ago, it attracted the interest of Japanese television executives, who often toured the facility, a station insider recalled.

WRTV’s Boling said that, technically speaking, the hub could be modified to download and distribute program content to individual stations. But for now, it doesn’t plan to stream programming. Imagine, for example, if a fiber cable were disabled and effectively starved all 19 Scripps TV stations of content.

“A backhoe could cause a disaster,” Boling said.

Moreover, Scripps would also have to pay for more expensive data lines crisscrossing the country to distribute programs to far-flung stations.

A person familiar with the Scripps hub, who asked not be named, said the facility will be robust enough for expansion later. Perhaps it someday could provide master control services for non-Scripps stations, he said.

Of course, such whiz-bang technology can have adverse effects—on master control technicians at local stations.

The National Association of Broadcast Employees & Technicians raised a ruckus last year when KOIN-TV in Portland, Ore., said it was outsourcing control-room functions. KOIN was purchased by LIN Media, which transferred master control to Indianapolis, the union said.•