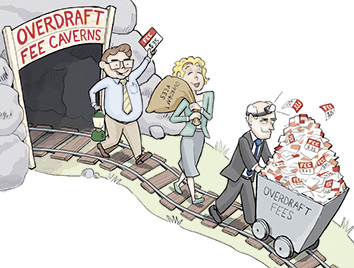 Bank customers stung by overdraft fees of typically $35 per transaction have long suspected the bank is making a fortune at their expense.

Now we know exactly how much of a fortune—or not—that larger, Indiana-based banks are generating from those ill-timed debit and ATM transactions.

Also becoming clearer is that banks vary widely in their appetite for, and in their method of collecting, this type of fee income.

For the first time, the Federal Deposit Insurance Corp. has required banks with assets of $1 billion or more to include a line-item disclosure of overdraft fee income, as part of quarterly reports they file with the agency.

Eight such Indiana-based banks serving the Indianapolis area collected a total of $13.5 million in overdraft fees in the first three months of 2015.

And that’s just one quarter; annualized, it’s more like $54 million.

That would have been enough to buy the 36-story Regions Tower, which sold last year, and have $6 million left over.

Or that $54 million would have bought Forrest Lucas 17 more mansions the likes of Steve Hilbert’s former Le Chateau Renaissance, based on the $3 million Lucas paid for the palace in 2010.

“At $35 a pop, those numbers run up quickly. You compare that with ATM fees that are $3,” said Greg McBride, senior vice president and chief financial analyst at Bankrate Inc.

The FDIC doesn’t provide state-by-state overdraft-fee data for banks that operate here but are headquartered in other states, but among Indiana banks, Evansville-based Old National Bank collected the most in overdraft fees during the first quarter, at $4 million. It’s not surprising, given that Old National is the largest Indiana-headquartered bank, with assets of $12 billion.

But by a different yardstick—highest percentage of overdraft fees relative to total fees and other non-interest income—nobody does it better than MainSource Bank, which has $3.2 billion in assets and is based in Greensburg.

MainSource’s $3.3 million in overdraft fees in the first quarter amounted to 30 percent of its fees and other non-interest income—vs. 10 percent for Old National.

MainSource and other community banks don’t have the diverse sources of fee income that giant institutions such as Chase or Wells Fargo have, said Archie Brown Jr., CEO of MainSource.

“Certainly with interest rates being so low for so long, it’s beginning to put pricing pressure on banks’ net interest income,” Brown said of the growing reliance in the industry on fee income.

Tighter federal regulation has affected everything from mortgage and credit card lending to bank investments to trading in derivatives. Suddenly, he said, “risk-taking became verboten.”

The stock market’s plummet in the late-2000s also flooded banks with new deposits as investors sought safety in government-insured accounts. Banks had to pay deposit insurance on those bigger piles of cash along with interest.

“They have had to turn to fee income, activity-based sources of income,” Farra added.

But not all banks have seized on the overdraft-fee opportunity.

The National Bank of Indianapolis was at the bottom of the list in overdraft fees collected during the first quarter. The $55,000 it reaped represented 1 percent of its total fee and other non-interest income.

Bank CEO Morris Maurer said minimizing such fees was a deliberate decision when the bank was founded 22 years ago to pursue a “high-service” business model. Where possible, the bank elects to sweep in funds from other accounts to cover an overdraft, instead.

“Banks are trying to find sources of income [as] interest rates are down. I ‘get it’ from an industry perspective,” Maurer added, “but I don’t subscribe to it.”

(Bank Chairman Mickey Maurer is a shareholder in IBJ Media, which owns IBJ.)

One telltale sign of whether a bank is hungry for overdraft-fee income is in the way it processes transactions on a nightly basis.

Those not aggressively pursuing overdraft fees usually process transactions from lowest dollar amount to highest. So, say a customer had $100 in his checking account and made five purchases with a debit card—four for $20 and one for $200.

If the bank clears four, $20 transactions first, and the $200 transaction last, only the larger one exceeds the account balance and incurs an overdraft fee.

But a bank that wants to gin-up its overdraft revenue will do the opposite, processing transactions from highest to lowest.

So this time, the $200 transaction would be processed first—immediately making the checking account overdrawn. All five transactions would incur an overdraft fee. If that fee is $35, the grand total would be $175.

Also affecting overdraft income is whether a bank processes debits or deposits first. A customer who has $75 in his account and then makes a series of purchases totaling $125 might follow up with a $100 deposit in an effort to keep his account in the black. But if the bank processes deposits last, he’ll still slide into the red and suffer overdrafts.

“That type of gamesmanship has come under regulatory scrutiny. You’re seeing less and less of this,” McBride said.

“There are times when an overdraft fee is appropriate for [customer] behavior,” Maurer said. “But I think some banks push the edge by trying to maximize those fees.”

A form of ‘credit’

Then again, some institutions counter that they’re not just charging a fee but providing a service for customers. Covering the shortfall, albeit with a fee, ensures the transaction goes through without embarrassment at the store checkout line.

A consumer who thinks that way is misguided, said Nicole Lorch, senior vice president of retail banking at First Internet Bank. Advancing cash on an overdrawn account might help a customer avoid embarrassment at the Starbucks counter, Lorch said, but effectively “you’d be paying $35 for coffee” once an overdraft fee is tacked on.

Brown of MainSource said that, even after the federal Dodd-Frank Act forced banks to ask customers whether to “opt-in” to overdraft protection, “still, the majority of our customers using debit cards wanted the service.”

He attributes the growth in MainSource’s fee income in part to the bank’s meteoric account growth. It now has 81 offices in Indiana, Illinois, Kentucky and Ohio. This year, the bank is on pace to open 23,000 checking accounts, from 8,000 opened in 2008. Also growing is the percentage of customers with debit cards, with a high correlation between debit card activity and overdraft fees.

Moreover, Brown said, although some consumer advocates assert that overdraft fees wind up hurting those in poverty, he doesn’t see such a trend. Rather, for whatever reason, there’s a population of customers who simply handle their money in a way to repeatedly incur overdrafts, he said.

“A lot of consumers look at this as almost a form of credit. It’s going to cost them more money if they go to a payday lender. It’s almost been a safety net for them,” McBride said.

Tom Fite, deputy director of the Indiana Department of Financial Institutions, said he’s heard the argument that some customers would be driven to a payday lender and, “if not for overdraft protection, where would these customers go?”

One banker told Fite: “You don’t understand. Customers call and thank me for paying an overdraft.”

Nevertheless, the DFI’s bank examiners keep an eye out for signs of predatory characteristics in overdraft products. Fite said he can’t recall the department’s having to take action in recent years, however.

In 2013, Brenda Lear, of Trafalgar, filed a suit in U.S. District Court in Indianapolis, seeking class action status on behalf of Muncie-based First Merchants Bank customers. She alleged the bank manipulated the timing of customers’ transactions to cause checking accounts to bounce more frequently.

The court stayed the case, however, ceding to First Merchants’ request to submit to arbitration.