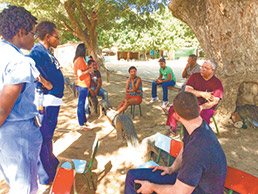 Obeime, second from left, tries to de-mystify Western medicine for patients in other countries. (Photo courtesy of Timmy Global Health)

Dr. Mercy Obeime has for nearly two decades been medical director of the SYMPAQ Clinic in Garfield Park, which serves low-income patients.

Since 2004, Obeime, 52, has also been taking annual medical mission trips to impoverished countries, starting with her native Nigeria, and now—via a merger of her foundation with Timmy Global Health—to Ecuador, Guatemala and others.

She spoke about how those trips help her treat patients in the United States; how Obamacare is affecting her practice; and even how, as a teenager, she aspired to be a nun.

Why do you think doing medical service overseas is helpful for your work here?

One of the first things I noticed was, dealing with poor patients like I have here was not a unique problem. There are certain behaviors that you could actually call poverty behaviors; the things that people do because they are in a constant mode of insecurity is pretty universal.

Can you give examples?

They are terrified of Westernized medicine, because they don’t really understand it. The health literacy is so low. So you have to build trust more than tell them about facts.

Because [if I’m poor], I’m worrying about how I’m going to eat, and you’re telling me I have to come and see somebody to get this medicine I don’t think I need. We have patients who come to me, because they have pain, but they haven’t seen their doctor about their diabetes or hypertension, and I tell them, “I’m not giving you any more pain medicine; you need to go see your doctor. The reason for your pain is, your diabetes is out of control and your nerves are dead. So giving you [pain] medicine is not it.” And they look at me and say, “Oh, she’s so mean!”

Now that Obamacare and the Healthy Indiana Plan are expanding insurance coverage, is that changing things at your health center?

There’s a woman I saw today who wasn’t taking her medicine. Because she kept showing up in the emergency room, they sent her back to us. She just doesn’t see [that] I can’t give her pain medicine and not worry about whether she has cancer or whether she has pancreatitis. She was yelling at me.

So we are going to get her to the point where she understands that you can’t just show up every day and say, “I don’t have insurance.” Now you have insurance [via HIP 2.0], and we know where you are and where you can go. If you go to Community [Health Network], they are going to say, “Oh, you have insurance, and you’ve been to St. Francis; you need to go back there.” Before, [patients] would say, “I have no insurance; [doctors] don’t want to see me,” and [the hospitals] couldn’t argue about that.

Is there still a need for your health center then?

The reason we have this center still open and we still take care of the underserved is because of faith and because the sisters [the Franciscan nuns who oversee Franciscan St. Francis hospitals] want to take care of the people who fall off the boat. Businesswise, our accountants have said, there’s no reason for this place to be open because we could get paying patients in here and not have to deal with [needier patients].

Is faith a big motivator for you? If so, why?

Yes. I wanted to be a nun until I was 16. And then I decided, I’m not even Catholic, and I left the Catholic church. I just went to my friends’ [non-denominational] churches. But when I was getting married, I decided I should come back.

If I looked at someone and said, “You know what, God tells me that this person cannot really do any better, that we need to adopt them and take care of all of their needs because God tells us we are supposed to take care of the poor,” I’m doing that because of my faith.

When I look at it, God gives us responsibilities. And even though my life is crazy, I like the job that God gives me, because I like the side that I am on, most of the time.