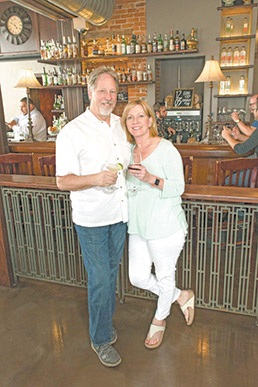 Bill and Teresa Webster launched 12.05 Distillery and the Repeal restaurant earlier this year in Fletcher Place, a neighborhood on downtown’s southeast side that’s fast becoming a destination for trendy eateries.

The two, both 59, are still finding their way as restaurateurs, nearly five years after marrying, but are optimistic about the chance their ventures will survive.

What’s it like operating a business as a married couple? Is it more rewarding or challenging?

TW: We pick up where the other one leaves off.

I’m more the one at the accounting end of it. He keeps a level head. I get more emotional over things. When I’m freaking out, like I was this morning, he’s calm.

He owns Fountain Square Brewery, along with two other guys, so we had worked together that way.

We had other people that wanted to invest in this, but we didn’t want anyone else involved because we know we work together well and so we didn’t think that would be an issue.

How does running your own business differ from working at a large corporation?

In the corporate world, I think you find yourself in the position where you have not nearly as much control or impact on your own destiny. And I think the one thing that we’ve really enjoyed about owning our own business and working together is that success and failure are ours to own.

TW: There’s a greater reward, too. The rewards are that people come in and say, “This is a cool place, we had a great dinner, the drinks are great, and the place is beautiful, and we love the atmosphere.”

What is the process for distilling liquor and how long does it take?

BW: The entire process can take as little as seven days. It can take as long as 12 years. If you’re doing whiskey, of course, you’re going to be aging it and it’s going to take a significant amount of time.

You make beer by extracting sugars out of grains and then introducing yeast that will feed off those sugars and produce alcohol. The grains then provide other flavor kinds of molecules to the whole mix. So mashing is creating the sugar base. Then fermentation can take as little as four days. At that point, then you’ll take this liquid that has anywhere from 8 (percent) to 10 percent alcohol in it and introduce it into a still.

The still, you’ll heat that up. Water and alcohol have two different boiling points, but they’re very close together. You see those tall columns in there (pointing to 12.05’s stills)? Those columns are used to help fractionate or separate the water from the alcohol. Because, even after you boil the alcohol up, it’s always bringing water vapor with it. And depending on how many of the columns used, it will impact how much yield of alcohol you’ll get from it. So if we’re doing a vodka, we need to distill that to about 92 (percent) to 95 percent alcohol and dilute that, so it’s a very neutral spirit.

Given that there are two distilleries in Fletcher Place within blocks of each other, what’s that say about the distilling industry?

BW: The beer market in Indiana—total barrels sold—is about 1 million barrels of beer. That number hasn’t changed in 20 years. We’re drinking as much beer as we used to, but what’s happened in that beer market is that a greater percentage of that market is now craft beer—locally brewed beer.

Why do you think Fletcher Place has become a popular destination now for restaurants?

TW: I think it’s the proximity to downtown, yet without being right in the heart of downtown. The Cultural Trail has improved it immensely. I think people are looking for a place to go that isn’t quite as congested, and I think down here you have more mom-and-pop type places, more family-owned businesses and people like the quaintness.

Where do you see 12.05 Distillery and Repeal in five years?

BW: With the restaurant, I think we’ll see growth over the next six months and then it will stabilize. You only have a certain amount of capacity. Our expectation is that, once we reach that saturation point, the restaurant provides the experience for tasting our distilled spirits.

We have a limited amount of capacity with our distilled spirits here. My suspicion is that, within the next year, we’ll probably reach capacity with the equipment that we have. When that’s the case, we will have a manufacturing facility that we will invest in.