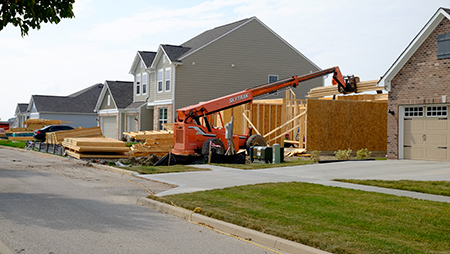 Those new homes that keep sprouting up like corn in the fields surrounding Indianapolis are helping to keep area housing prices low, says an economist who’s crunched several years of numbers.

That might be good news for first-time homebuyers, but not for longtime owners expecting to score big returns.

BuildZoom chief economist Issi Romem sifted through housing statistics from 2000 to 2015 and found the average home price in the metro area appreciated just 12.8 percent in that 15-year period.

He attributes the softness to the steady stream of construction.

“It’s not adverse to building subdivisions on the periphery,” Romem said of the Indianapolis area. “And the city isn’t that large. The commute [to downtown] is not 90 minutes, so the fringes are still very viable.” 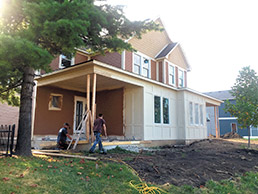 A study finds new home construction is the most difficult in the 46202 ZIP code, where this home is under construction. (IBJ photo/Lesley Weidenbener)

Romem, of the San Francisco-based service that helps homeowners find contractors, used stats from the Federal Housing Finance Agency to compile his results. Lawmakers established the FHFA in 2008 amid the housing meltdown to oversee Fannie Mae, Freddie Mac and the Federal Home Loan Bank System.

What’s most striking about Indianapolis’ 12.8 percent figure is how much it trails other metropolitan areas.

On the other side of the country, Washington, D.C., posted an 85 percent jump, trailed by Miami (80 percent) and New York City (60 percent).

It’s easy to understand why Indianapolis would pale in comparison to cities on both coasts. Their housing markets are typically much more active than those in the Midwest and are prone to extreme cases of volatility.

But Indianapolis falls behind several Midwestern cities, too.

Louisville leads the pack, at 26 percent, followed by St. Louis and Milwaukee, both clocking in with 24 percent increases, and Columbus, Ohio, at 18 percent. Even Chicago, where property taxes are much higher than in Indianapolis, posted a 16 percent increase.

Indianapolis, however, did manage to best a few Midwestern cities. Cincinnati achieved just a 10 percent jump, while home values actually dropped during the 15-year span in Detroit (-6 percent) and Cleveland (-3 percent).

Michael Hicks, director of the Center for Business and Economic Research at Ball State University, doesn’t dispute Romem’s findings and agrees with his analysis of why housing prices in the Indianapolis area haven’t appreciated much.

In Hamilton County, from 2000 to 2015, home prices climbed 30.3 percent, but just 11.1 percent in Marion County. Prices in Boone County appreciated the most during that time, 30.5 percent, while housing prices in Shelby County grew the least, 8.9 percent.

For the middle class, home equity is often a major source of household wealth. But those living in depressed areas might not have much to show for their investments.

“If you’re in Carmel, you’re getting much more than 12 percent,” Hicks said. “But if you’re in a pretty dismal place like the east side [of Indianapolis], home prices could be dropping. So location still matters a great deal.”

FHFA researchers point out the disparity in a synopsis of their study.

“Much of the 20th century in the United States can be characterized as one of suburbanization,” FHFA said in its report, released in April 2016. “Consequently, as relative demand for center-city housing fell, so, too, did prices.”

The group reviewed annual house-price indexes for nearly 18,000 ZIP codes in the United States over a 40-year period to compile its report. Romem at BuildZoom took the percentages from the ZIP codes for just the 15-year period from 2000 to 2015 to compile his results for the metropolitan areas.

His findings for Indianapolis are welcomed by Douglas McCoy, director of the Indiana University Center for Real Estate Studies, who doesn’t consider a home to be an investment.

“That’s sort of been a misnomer,” he said. “It doesn’t produce any income.”

Instead, McCoy said, spending less on a home has immediate benefits that outweigh any debate about a house being an investment.

“You have the opportunity to take this additional income that you don’t have to put toward housing,” he said.

Meanwhile, FHFA says recent evidence suggests the trend of suburbanization is weakening, which is translating to higher home prices in city centers.

To that end, Romem at BuildZoom used FHFA data to identify the toughest places to build in the United States by correlating high housing prices in areas where the fewest homes were constructed.

In Indianapolis, the toughest place to build a house is in the 46202 ZIP code that surrounds downtown to the west, north and east. From 2000 to 2015, housing prices in that ZIP code jumped nearly 51 percent while the number of houses increased only about 15 percent.

“That’s very similar to what we see in other rankings; it’s one ring out of downtown,” Romem said.

Added Hicks: “Urban planners get all weepy-eyed over that. They think we should live like South Koreans, with 20 million people in Marion County,” he said. “But that’s not what American homeowners are looking for.”

A second tough-to-build area in Indianapolis is the 46280 ZIP code, which extends from East 96th Street just east of Meridian Street to nearly East 116th Street. There, housing prices in the 15-year period rose nearly 26 percent while the number of homes increased 25 percent.

Still, for most of the metropolitan area, Romem says to expect more of the same.

“That means that you may not make a fortune for your retirement by watching your real estate rise,” he said. “But it does mean that you can feel pretty secure.”•