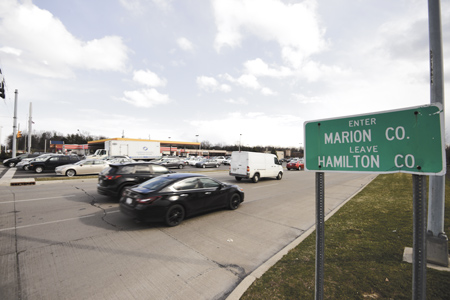 The only thing more predictable than potholes littering Indianapolis streets each spring is the seemingly dead-end debate over whether nearly 187,000 commuters who drive into Marion County each day for work should be taxed to pay for city road maintenance.

But Indianapolis Mayor Joe Hogsett—who just scrounged up money to fill those potholes—says the city and its advocates, some of whom have been talking about the commuter issue for more than a decade, should change their approach.

Instead of trying to persuade skeptical members of the Indiana General Assembly to adopt a non-resident income tax or to redistribute income tax revenue for the sole benefit of Indianapolis, Hogsett hopes to show legislators how Fort Wayne, South Bend and other cities are similarly affected by commuters.

The mayor is seeking to build a coalition of communities that find their services are squeezed by high numbers of incoming commuters and want what he calls a “more equitable distribution of local income tax.”

The debate has “always been in the context of Marion County,” Hogsett said. “We need to do a better job in messaging.”

But Hogsett faces an uphill battle in trying to get some of those cities on board—and persuading a Legislature that has previously rebuffed such ideas.

Rep. Mike Karickhoff, R-Kokomo, has for years advocated a redistribution of income taxes, to no avail. Currently, all income-tax revenue stays in the county where a taxpayer lives. In 2015, Karickhoff offered a bill that would have shifted 20 percent of that revenue to the county where the taxpayer works. It didn’t receive a vote.

“I drive down Capitol Avenue [in Indianapolis] several times a week. It’s terrible,” he said. “If a little piece of my income tax I paid because I work here and earn income here [went to the city], so what? I use the roads here. I use the snow service.”

Karickhoff served on the Kokomo City Council in 2002 when the Legislature was trying to find ways to lower property taxes. A few years later, legislators—and then voters through a constitutional-amendment process—imposed caps that limit what property owners must pay for local government and schools. That has increased local governments’ dependence on income taxes.

The goal, Karickhoff said, was to rely more on taxpayers’ earnings than on their property, which does not necessarily indicate an ability to pay. “A community like Kokomo or Indianapolis or Anderson or Marion or Muncie, or just about any second-class city, would be a [beneficiary] if a portion of the income tax went to where you work,” he said.

South Bend Mayor Pete Buttigieg said he is interested in “having that conversation” about more equitable taxation, but “doesn’t know that anyone has proposed a perfect model here.” 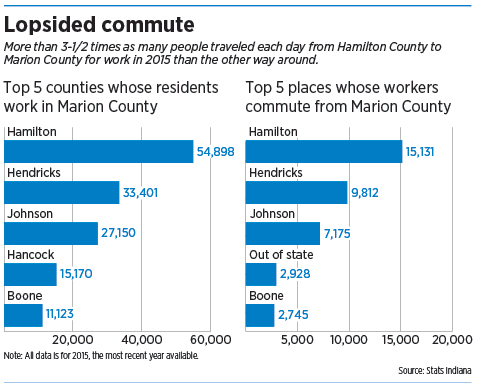 “Part of how government works is, we all share the cost for things and have slightly different patterns for how we use them,” Buttigieg said. “We just need something that’s reasonably fair.”

That can be tough to determine.

“If people are heavily using a road but don’t pay for it, is that fair?” he said. “It’s kind of like the Post Office. Delivering a letter to rural Alaska costs 20 times as much, but I’m going to pay the same for a postage stamp.”

But Buttigieg said South Bend and other mayors aren’t likely to “get meaningfully involved” in an effort to change taxation unless they see a proposal that accounts for differences among cities.

For example, the people who commute into Indianapolis are coming from other counties. But those coming into South Bend are largely coming from rural areas in the same county. That could make simply tweaking the county income tax distributions unhelpful for South Bend and some other cities.

Matt Greller, CEO of Accelerating Indiana Municipalities, said the association represents cities and towns “on both sides of this issue.” He said while the state’s biggest cities such as Indianapolis get a lot of the attention in the debate, some smaller cities are also affected.

“Think about a city like Jasper,” Greller said. “During the day, their population more than triples because of workers coming into the community down there. We have these spots all over the state where this happens. The ultimate answer is probably a statewide discussion about income tax distribution and what makes the most sense.”

But not all leaders in communities with high levels of commuting are interested in getting involved.

Elkhart County has about 31,000 commuters coming into the county each day. But Elkhart Mayor Timothy Neese said he doesn’t “have any interest in advocating any type of commuter tax.”

“People that don’t live here are still paying various types of revenue, whether it’s at the gas pump or at restaurants or whether it’s in one of our stores or just entertainment," Neese said.

Neese said commuters are a net benefit to the city. And instead of talking about changing the tax structure, he wants to convince more of those people to live in Elkhart. He said the city is supporting various housing and apartment projects and trying to increase “quality of place and livability.”

A spokeswoman for Evansville Mayor Lloyd Winnecke said he was “not interested in commenting” about the issue. And a spokesman for the Southwest Indiana Chamber, based in Evansville, said “it does not have an opinion on this issue at this time.”

‘No support’ for new tax

He said any new tax would “have to be regionally based and have some sort of sharing mechanism for both where you live and where you work for it to have any chance from a political standpoint.”

“It’s going to be monumentally challenging” to get something done, Greller said.

David Bottorff, executive director of the Association of Indiana Counties, said the questions about commuting and tax revenue are “critical” and should be discussed regionally. That debate, he said, should take place before a legislative session begins, so the advocates of change are ready to make a coherent pitch.

It might not make a difference. While the pothole problems have enlivened the commuter tax debate in Indianapolis, they have created political friction, too.

He said “there is no support in the Republican caucus of the Senate to establish a commuter tax or any type of added taxation for individuals who work in Marion County and live outside.”

“This crisis we have with potholes has further increased the odds of no commuter tax being created because there’s no management or creation of a vision,” he said. “There’s not a whole lot of confidence in the leadership of the mayor right now as to the direction we’re going with our roads.”

On March 12, the Indianapolis City-County Council unanimously approved Hogsett’s plan to spend $14.5 million in emergency funds to fix the city’s crumbling roads. About $13 million of that will come from dipping into $52 million in local option income tax revenue the state returned to the city in 2016 specifically to address local road funding. (see story, page 9).

But Indianapolis has “no real overall plan,” Merritt said, and Hogsett has not shown that Indianapolis needs a change in income tax distribution or a commuter tax.

“It used to be that mayors would come over to the Statehouse and make the case for something like a commuter tax,” Merritt added. “I don’t remember the last time Mayor Hogsett was in the Statehouse.”

Hogsett’s spokeswoman, Taylor Schaffer, said state lawmakers should be well aware of the city’s transportation plans, given the mayor’s multiple efforts to talk with them. “Prior to every General Assembly, we have invited all of the Marion County delegation over and talked through the thoughts, priorities and challenges facing the city,” Schaffer said. “I know transportation is something we’ve gone into detail on.”

The city's infrastructure plan is included in an agenda provided to IBJ of the most recent Nov. 16 meeting. An RSVP list from the meeting shows that 14 legislators—including five Republicans—attended, but Merritt is not listed as an attendee.

Janice McHenry, a Republican member of the Indianapolis City-County Council, said the $52 million in income tax revenue the state returned to the city “is just another drop in the bucket.” McHenry pointed out that the city has $725 million worth of deferred road maintenance.

McHenry said Hogsett should take the lead on the commuter conversation among cities and counties because the issue is a two-way street.

“I can speak from being a reverse commuter for 30 years,” McHenry said. “When I was a teacher out in Hendricks County, I never understood why I didn’t pay some taxes to Hendricks County. I relied on their streets and roads. I felt I should pay something for their storm drainage, and I relied on the police and fire departments to protect me.”

But that opinion will need to be more widely held for the system to change.

Indy Chamber Vice President Mark Fisher said part of what kept the issue from making progress in the past was a lack of public education.

“A lot of people aren’t aware that, if they work in Marion County and live in Hamilton County, that their income taxes don’t stay where they work,” Fisher said. “The potholes have accelerated the conversation faster than anything we’ve been able to do. People are now paying attention.”•