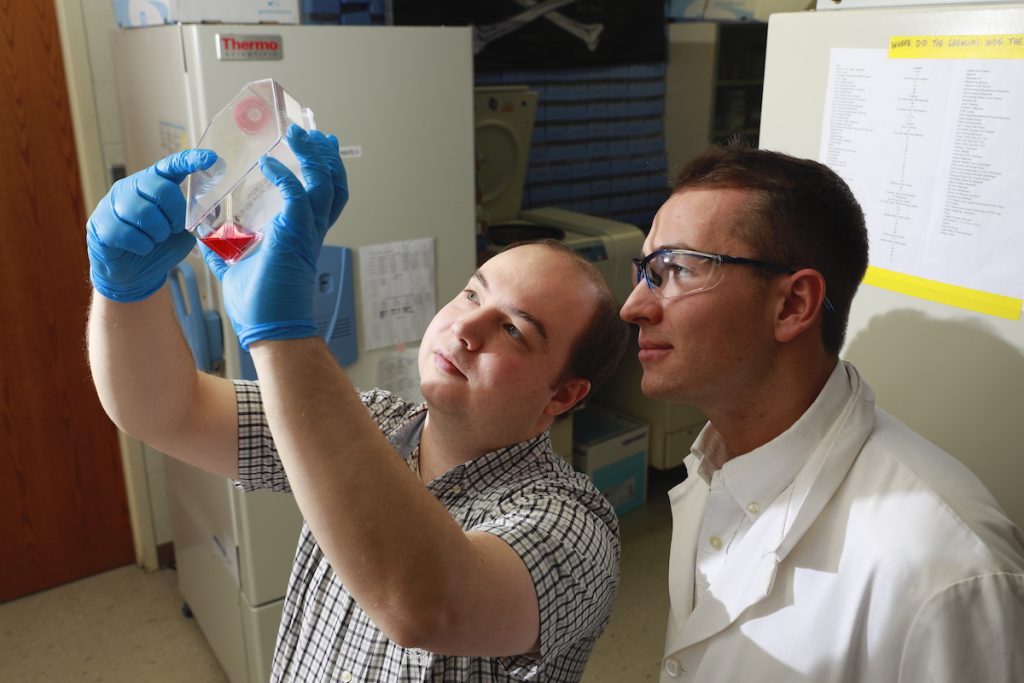 As an undergraduate science student, Christopher Stobart became fascinated by viruses—the microscopic agents that invade living cells and can cause widespread disease.

“I fell in love with learning more about viruses, the virus community, learning how these things work,” Stobart said. “As science students, we often don’t spend a lot of time talking about viruses in biology. Yet, they’re the most plentiful things on the planet that replicate. And they infect every living thing that we have found so far.”

Now, as a researcher and assistant professor of biological sciences at Butler University, Stobart is trying to unlock a tough riddle: how to stop the replication of the coronavirus, the latest version of which has infected more than 70,000 people and killed 1,770 across the globe.

Stobart and his students are focusing on an enzyme that cuts large viral proteins into smaller proteins, a process that accelerates the replication of the virus.

His lab has located an important region in the structure of an enzyme known as NSP5 in the mouse hepatitis virus, a coronavirus that affects mice but is safe to study in a lab. Its structure mimics the coronaviruses that affect humans.

He believes that inhibiting the enzyme’s effects on the protein could stop the virus’ replication.

He plans to submit his findings in coming months to the Journal of Virology, a leading scientific publication in the field. And he hopes that a biotech or pharmaceutical company will be interested in collaborating to find a drug that will inhibit the enzyme and tame the coronavirus.

“If you break part of a protein and all of a sudden the protein stops working, then you know that it’s critical, it’s vital for the protein and its function,” said Stobart, a microbiologist and virologist.

Stobart started studying the enzyme during his doctoral work at Vanderbilt University in Nashville, Tennessee, in 2009.

“When I took over that project, the protein was well studied,” he said. “People knew things about this protein. They knew what it cuts. They knew what it looked like in terms of structure. What wasn’t known, however was exactly how it functions.”

So Stobart began making mutations inside the protein, modifying it and trying to figure out which parts were important—and how to stop activity in the protein. In the process, they are looking for potential targets for a drug that could stop the virus from growing and spreading.

So, for the past three years at Butler, with a few pauses, he and his students have been experimenting on the protein, trying to see what could stop it from functioning. He believes that inhibiting the enzyme NSP5 could stop the virus from replicating.

The current coronavirus is just the latest in a group of viruses that cause a variety of diseases in humans and other animals, Stobart said.

The first four human coronaviruses were identified in the 1960s and 70s, often infecting many thousands of people but causing only mild problems, such as the common cold.

Now, the latest version of coronavirus, called COVID19, is a respiratory disease first detected in China and continues to expand. Chinese health officials have reported tens of thousands of cases.

Stobart said the latest coronavirus’ mortality rate is less than SARS and MERS, but it’s spreading much more quickly.

In January, Health and Human Services Secretary Alex Azar declared a public health emergency for the United States. More than 400 cases are under investigation, with 15 cases declared positive so far.

While the American public might have been blindsided by the new coronavirus, and amazed by how quickly it’s spreading, scientists have a longer view.

“The coronavirus community looks at it like, this is just the third episode of an ongoing series,” Stobart said. “We’ve seen these before.”

Stobart’s work in the lab—and possible future collaboration with a pharmaceutical company—could take years to develop a treatment for humans, but he believes another type of coronavirus could follow on its heels.

“Part of the reason we’re doing this research is to find something for use down the road,” he said. “While we probably won’t have a drug specific to NSP5 from our research for this outbreak, there’s a precedent that for later outbreaks, there will certainly be a need, and there will likely be later human coronavirus outbreaks.”