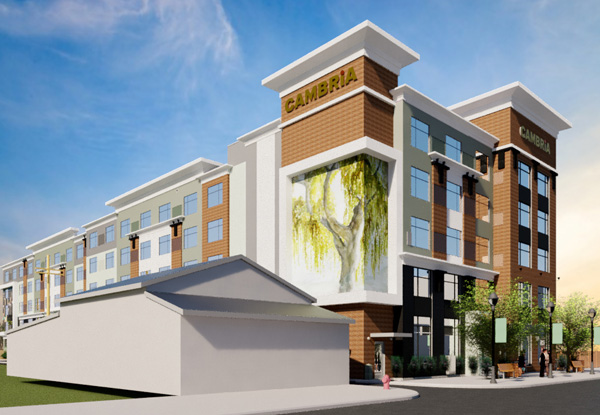 The Cambria hotel would be located at 850 S. Meridian St. (Image courtesy of Choice Hotels International)

A new Cambria hotel is planned for the south side of downtown Indianapolis, less than one year after a local developer scrapped plans for a hotel near the same location with the same brand.

News of the project comes amidst a veritable blizzard of downtown hotel proposals in the last few months.

Indianapolis-based MWA LLC plans to build a five-story, 148-room Cambria at 850 S. Meridian St., less than one block north of Interstate 70. The project is expected to be finished by 2021.

Announced Tuesday by Maryland-based Choice Hotels International, the project is part of a larger effort by Choice to expand its presence in Midwestern states. The hotel firm, which owns the Cambria brand, also announced a new Cambria would be built in Kansas City, Missouri, by a different developer.

There are about 45 Cambria hotels across the United States. The downtown Cambria will be the third in Indiana, joining hotels with the same flag in Westfield and Noblesville.

Crystal Kent, a project architect with Prince Alexander, which is doing the design work for the new Cambria, said the developer does not plan to seek incentives for the project.

The development site is comprised of several parcels, all of which are owned or controlled by MWA LLC, she said.

Instead, the development will be among the first new projects in the Near Southside tax-increment financing district, the creation of which was approved in July by City-County Council.

The district designation allows the city to utilize tax revenue to fund infrastructure improvements throughout the corridor.

Kent said the project will target business commuters desiring proximity to the many downtown corporate headquarters in Indianapolis, without being near the nightlife around the Convention Center and Monument Circle.

The hotel is expected to offer a variety of amenities, including spa-style bathrooms, on-site dining, a multi-function meeting space and a state-of-the-art fitness center.

Kent declined to share the expected development cost for the project.

That project—announced in 2015—would have added 150 hotel rooms but was scrapped due to the project being “cost-prohibitive.”

The Cambria project is just the latest in a surge in downtown hotel projects announced in the last year and now in various stages of development.

On Sept. 19, the owner of the Morrison Opera Place announced plans to construct a 22-story addition to add as-yet-unbranded hotel rooms and condos to the building as part of $60 million redevelopment project.

Other recently announced projects on the south side of downtown include an Avid hotel at 324 Wilkins St.; an Even Hotel at 808 S. Meridian; and an unnamed hotel in the King Cole Building just a block south of Monument Circle.

Indianapolis-based developer Loftus Robinson recently was given the green light by the Indianapolis Historic Preservation Commission for alterations it has proposed to the former Odd Fellows Building at 1 N. Pennsylvania St., which will be converted into a Kimpton hotel.

Kent said that hotel market data shows there’s demand for a brand like Cambria in its neighborhood.

Correction: An earlier version of this story incorrectly identified the developer of the hotel project as Midwest GC LLC. The firm is the builder of the project; the developer is MWA LLC.