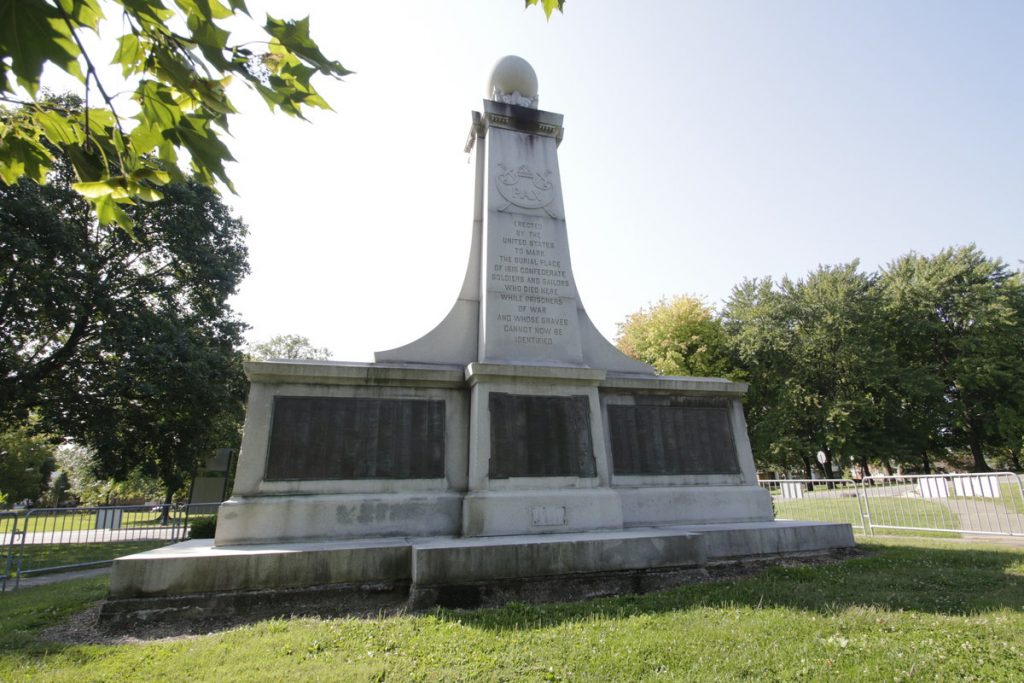 The grave monument was commissioned in 1912 in Greenlawn Cemetery to commemorate Confederate prisoners of war who died while imprisoned at Camp Morton in Indianapolis. It was moved to Garfield Park in 1928. (IBJ file photo)

A monument memorializing the deaths of Indiana confederate prisoners of war in Garfield Park will be dismantled and removed, Mayor Joe Hogsett announced Thursday.

The decision comes nearly three years after city officials began debating the appropriateness of its placement.

The Confederate Soldiers and Sailors Monument is dedicated to soldiers who died at a Union prison camp in Indianapolis during the civil war. It’s been on display in Garfield Park for more than 90 years after it was moved from its original location at Greenlawn Cemetery.

In August 2017—as controversy grew about Confederate memorials in other parts of the country—Indianapolis Parks Director Linda Broadfoot said the monument was “not in a location appropriate for its original purpose.”

She said then that the parks department would work with the City-County Council and not-for-profit organizations to “explore all available options to remove the monument from Garfield Park and ensure that, if it is to be on public display, it is within a historical context that does not affect a parks system that belongs to all Indianapolis residents.”

Hogsett said on Thursday that the most appropriate place for the monument would be a museum but that “no organization has stepped forward to assume that responsibility.”

“Time is up,” he said in a statement, “and this grave marker will come down.”

Contractors will remove the monument in coming days. The Indianapolis Parks Board has already voted—back in 2017—to remove the statue once funding was identified for the effort.

Hogsett said the city is currently identifying a source of funding, and the work is expected to cost between $50,000-$100,000.

The grave monument was commissioned in 1912 in Greenlawn Cemetery to commemorate 1,616 Confederate prisoners of war who died while imprisoned at Camp Morton in Indianapolis. It was moved to Garfield Park in 1928 following efforts by public officials, active in the KKK, who sought to “make the monument more visible to the public,” the city said.

“Our streets are filled with voices of anger and anguish, testament to centuries of racism directed at black Americans,” Hogsett said in his written comments. “We must name these instances of discrimination and never forget our past—but we should not honor them. Whatever original purpose this grave marker might once have had, for far too long it has served as nothing more than a painful reminder of our state’s horrific embrace of the Ku Klux Klan a century ago.”

46 thoughts on “City to remove Confederate memorial in Garfield Park”