Home » Decor: Inspired by her own divorce, a designer creates a formula for a home that heals 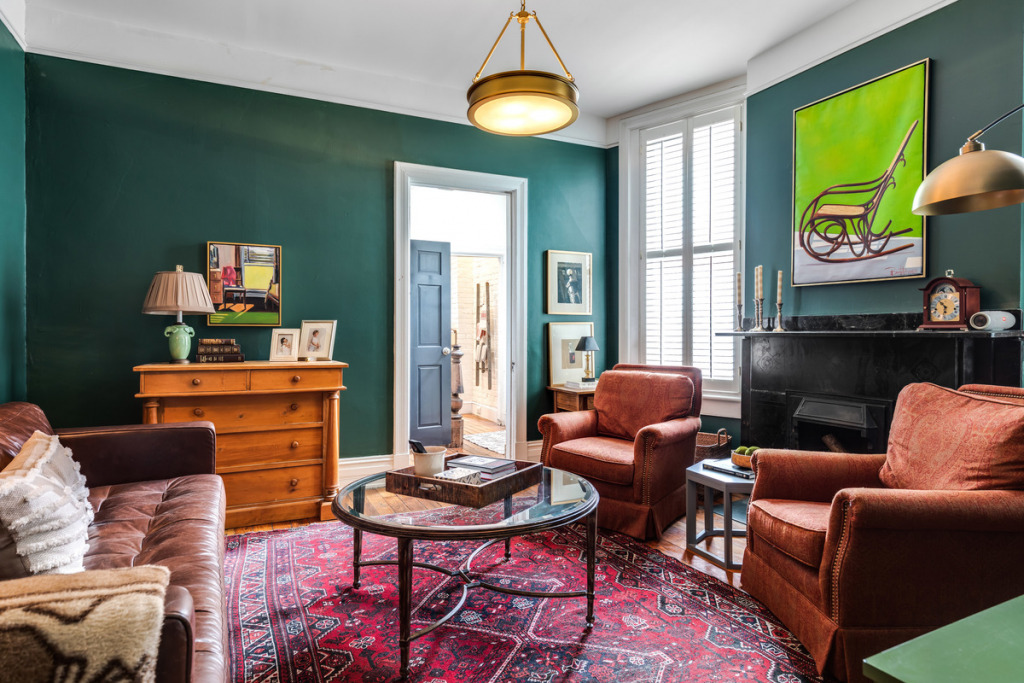 Easy and affordable transformations included changing out light fixtures and layering in art that kept her connected to personal narratives of her life. "I wanted to evoke a sense of inspiration and aspiration," Stevie McFadden says. (Photo by Mick Anders)

After a sudden split from her husband of 10 years, Stevie McFadden discovered firsthand that our surroundings play an influential role during times of crisis. The residential and commercial designer found herself in need of a home where she could overcome her heartache and create a new life for herself.

McFadden, who has a graduate degree in organizational behavior—the study of human behavior within an organization—and an innate eye for design, owns the interior design firm Flourish Spaces in Richmond, Va.

“It’s a thread that we try to weave through all our projects,” she says. “What are we putting in people’s surroundings that evokes emotions of belonging and feeling supported and cared for?”

Her work with not-for-profits in Richmond has helped her understand the principles of trauma-informed care in physical spaces, whether it’s designing sober-living apartments for the new Caritas homeless shelter or a teen center at the Boys & Girls Club.

“What are the messages in that space that they are worthy and spark their imaginations and make them feel supported?” McFadden said.

After separating from her husband, McFadden bought a 120-year-old brick rowhouse in the capital’s historic Jackson Ward neighborhood. Just two blocks from her office, the 2,300-square-foot home provided McFadden with a blank canvas to design the backdrop to her new life.

“We all have a narrative identity about who we are, our place in the world and our relationship to others. And when your story changes, you have to figure that all out,” she said. “Maybe a chapter ended very unexpectedly, and you have to rethink the next chapter and the implications for your identity.”

No longer living with her husband, but left with the possessions from the life they created together, McFadden felt grief-stricken.

“I didn’t feel a sense of control. Everything just happened,” she said. “There was a lot of self-doubt and fear.”

Fortunately, because of her line of work, McFadden knew the steps she needed to take to pick up the pieces and cobble her life back together.

“I’ve been a nester all my life,” she said. “When my own personal life got disrupted in such a way, I felt like I knew how to do this. I was trying to start my own process of healing and moving forward with my life.”

McFadden walked herself through a four-step plan to design a home where she could overcome the grief of her separation—and through the process, she learned how a space can heal and unlock potential.

After the initial split, McFadden bunked in a friend’s guesthouse until she found a new home. She put all of her possessions in storage, which gave her the space she needed away from all the memories. But when she moved into her new house, all the things that reminded her of the life she created with her husband came back. And the grief came flooding back with it.

“It was so emotional,” she said. “Boom—there were all the contents of my life deposited right in front of me.”

McFadden had ended up with half of the couple’s belongings, and she started to do an inventory—what she needed to purchase and purge. She found she had a surplus of sideboards and needed a bed.

“The places we inhabit—that is the stage where our lives take place,” McFadden said. “The stuff in our homes, it’s the artifacts of our lives and our stories up to that point. So what do you do with that stuff?”

Start with where you are and consider where you feel stuck. Evaluate how each space makes you feel, inventory items and assess their function.

McFadden started to ponder what her solo life required. She wanted her new home to show her connection to family, especially her parents and grandmother. Those positive relationships reinforced a joyful part of her identity that she wanted to celebrate daily.

When planning out her new home, McFadden also was on the lookout for aspirational pieces—furniture and decor that was a reflection of who she wanted her future self to be and that represented the life she wanted to build.

What do you imagine the next chapter of your life could look like? What possibilities exist that maybe you never let yourself consider before? Imagine your future self, how you feel when you come home and how the space makes you feel.

McFadden pondered her emotional connection to each piece of art, decor and furniture.

“What stays and what goes? What goes away for a little bit?” she said. “That’s how grief works. The pain doesn’t go away, but you integrate it back into your life in a different way.”

It was difficult for McFadden to look at certain photographs, gifts and mementos from trips. She didn’t want them on display, but she didn’t have the heart to throw them out, so she tucked them away until one day she can associate the objects with positive memories.

“If I threw away everything that reminded me of that part of my life, it felt like saying that decade of my life didn’t exist,” McFadden said. “What parts of this are important to who I still am? What items remind me of good times or important milestones? Grief is grief. Even objects that remind you of good times can still conjure up feelings of pain and suffering, so I thought really intentionally about that.”

McFadden also created a new narrative for other items that were connected to her past. For instance, two pieces of art that were wedding gifts are grouped together.

“Now when I look at them, I think about the people who gave them to us, not the fact that it was a wedding gift,” she said. “Sometimes you have to reinterpret the meaning of things.”

Acknowledge the provenance and value of each item as you determine its future in your home. Ask yourself how each item makes you feel. Purging burdensome things that remind you of a painful memory will liberate you, and displaying decor that makes you smile will raise your spirits.

To bring her new space to life, McFadden had to get creative with the furnishings and decor she was left with after her divorce. “I had to make it work,” she said. “There is nothing worse than a space that feels downgraded.”

Hand-me-downs and pieces from her old house had to be reimagined. The china hutch from her nana that was once in her dining room now sits in her bedroom and is filled with books.

By simply adding a coat of paint, furnishings were transformed and given new meaning. Bold peacock-colored chairs with citron cushions that previously sat in the foyer of her old house were toned down, painted in a crisp white so they fade into the background. “They now feel more sophisticated and calming,” McFadden said.

She repainted her many sideboards, too. One that was previously in her old kitchen is now painted navy blue and acts as the bar under her staircase.

“People may think redoing can feel like such a luxury when you don’t have excess money, capacity or energy, but it’s so important for your well-being, healing and moving on,” she said.

The kitchen and two bathrooms got a facelift, “but on a serious budget,” McFadden said. She replaced all the kitchen appliances with used ones off Craigslist.

All other rooms got cosmetic updates with new paint and light fixtures. Her lamps, coffee tables, occasional tables, Oriental rugs and kitchen island were found on Facebook Marketplace.

“This is the house that Craig built,” McFadden said of buying a majority of her furnishings off Facebook Marketplace and Craigslist. “You can go looking for those things and find them on the cheap. Beauty is not expensive.”

If you’re feeling stuck and attached to items, ask for a friend’s opinion to help you wipe the slate clean. Repurpose items and paint them as needed, but consider palette. Purchase to fill the holes.

As we experience the collective trauma of the novel coronavirus pandemic, McFadden hopes her process can help people reconfigure their spaces to make room to recover. Our surroundings matter more than ever, she says, and creating a home where we can feel happy, supported and safe during times of uncertainty is necessary.

“People are fearful of how to put a space together. They need to trust themselves,” McFadden said. “If there are things that bring them joy or that have a great story or that they just like because they are beautiful, don’t feel afraid to incorporate them. An interesting home is a beautiful home.”

One thought on “Decor: Inspired by her own divorce, a designer creates a formula for a home that heals”