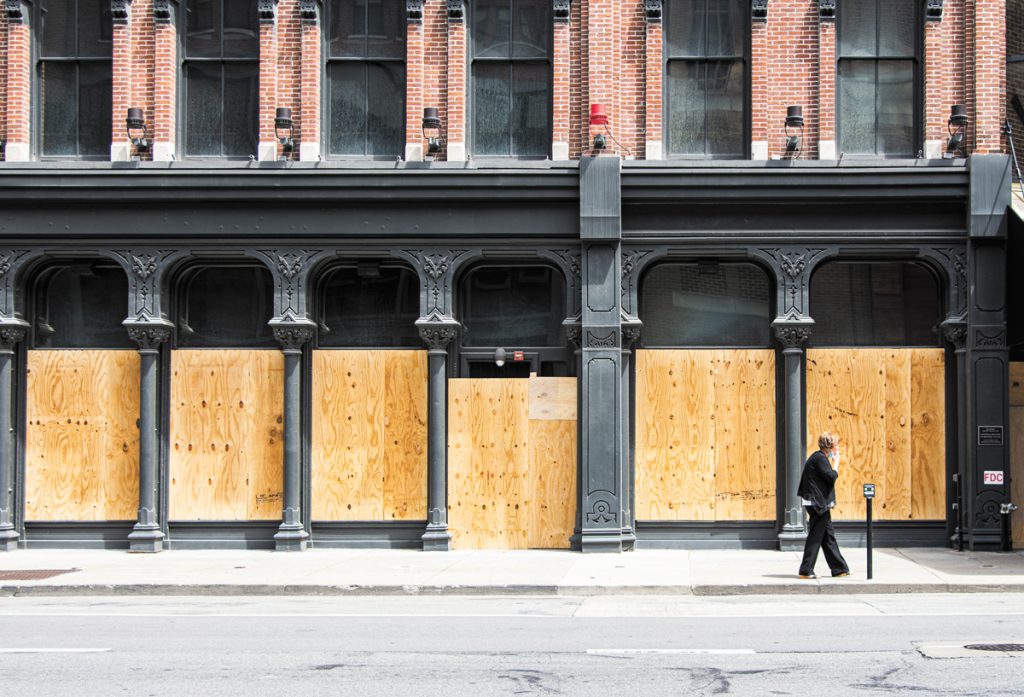 It’s hard to imagine how downtown could have suffered a more bruising one-two punch.

First, the COVID-19 pandemic essentially shut down the city and brought to a halt the conventions and sporting events that are downtown’s lifeblood—wiping out more than $175 million in economic impact and thousands upon thousands of hospitality jobs.

Then, outrage over the death of George Floyd of Minneapolis and broader issues of inequality for African Americans spurred protests last weekend that turned violent, with rioters smashing windows, starting dumpster fires and spraying graffiti across the heart of downtown.

“Downtown is not safe at this time,” Indianapolis Metropolitan Police Department Chief Randal Taylor declared at a hastily called press conference late Saturday night—an acknowledgement that might for years haunt a downtown that prides itself on safety and wholesomeness.

Indeed, Indianapolis’ selling points as a convention city have long been safety, ease in getting around and its reasonable prices, said Mike Wells, president of REI Investments, which owns the 300 North Meridian office tower and partly owns the Indianapolis Marriott Downtown.

“And if people don’t believe it’s safe, our major advantage is out the window and they may as well go to any big city in the country,” Wells said. “So, I am concerned about that.”

Stephen Goldsmith, who helped pave the way for downtown’s renaissance as mayor from 1992 to 2000, described COVID-19 as the first body blow to hit downtown and last week’s violence the second.

“It still has the capacity to be the most exciting place in the region to live, but I’m worried,” said Goldsmith, a professor at Harvard University’s Kennedy School of Government.

“It took decades to get here,” he said of downtown’s progress under a succession of mayors. “It would be a shame if it took a week to revert it.”

He said he’s concerned that some people will respond to the violence by making a knee-jerk judgment to steer clear of downtown.

“Now, we just need to have people take a deep breath, think through that this is a national and local phenomenon, recommit themselves to the substantial issues of poverty and don’t make any rash decisions about downtown not being safe in the long term while the city rights the boat,” Goldsmith said.

“One can be anxious about living downtown for legitimate reasons, given the weekend, but hopefully that leads to a positive set of actions for equity, not a precipitous set of decisions that, ‘I am going to flee.’”

“I don’t think it will have a lasting impact because, No. 1, it happened across the country, and No. 2, it is a movement that is totally separate from social justice,” drawing a distinction between the people who participated in organized protests earlier in the day and those who ransacked businesses later in the evening.

“They’re just looking for any opportunity to protest violently and damage property.”

That’s not to say he dismisses the unrest.

Much of the early legwork in creating today’s downtown began under the late Mayor Bill Hudnut, who led the city from 1976 to 1991. He often warned about the dangers of neglecting Indianapolis’ core, which at the time emptied out by 6 p.m. daily. “You can’t be a suburb of nothing,” he would say.

He was nothing if not audacious. He launched construction of the Hoosier Dome in 1982 on blind faith that he would be able to attract a National Football League team here—a bet that paid off with the arrival of the Colts from Baltimore in 1984.

And he dreamed up and launched construction of Circle Centre mall, which Goldsmith pushed into reality. Its opening in 1995 helped bring the vitality to downtown that made the explosive growth of the city’s convention industry possible.

All of those attractions have helped draw visitors—as well as residents. Fueled in part by an apartment-construction boom, the downtown population grew 35% from 2010 to 2018—from 12,949 to 17,525, according to The Polis Center at IUPUI.

The downtown workforce has been on the upswing as well. It boasted 148,319 jobs in 2017, the latest year available, up 22% from 2010, according to The Polis Center. And many of the newest downtown employers are tech companies, including Salesforce, Infosys and a long list of rapidly growing startups.

The result, said Michael Huber, president of Indy Chamber, is that Indianapolis’ downtown is better positioned to withstand economic challenges than it was 20 to 30 years ago.

“We don’t want to be blindly optimistic about it, but the fact is, it’s a more diversified downtown than what we’ve had in a few decades,” said Huber, who served as deputy mayor under Republican Greg Ballard. “As our city recovers, I hope it gives us a leg up [over] other cities we compete with.”

So where does downtown go from here?

Hospitality-industry officials acknowledge that tourism and conventions are likely to recover gradually rather than snap back, and that, in the interim, downtown businesses will feel more pain.

Wells said the violence might cause people seeking hotel rooms to opt for the suburbs over downtown for a while, which will make it more difficult to entice restaurants to open in the city’s core and could lead to 30% or more of downtown restaurants going out of business.

Adding to the pressure will be the growing preference across the country for working from home, which might lead employers in Indianapolis’ downtown to cut back on their office space long term.

While some workers and many managers might have been leery about working from home when the pandemic forced them into it, numerous studies have found it’s gaining favor—and, thanks to internet connectivity and video apps like Zoom, quite productive.

A survey last month from California-based Global Workplace Analytics found that more than three-quarters of respondents want to keep working from home at least some of the time after the coronavirus ebbs.

“The embrace of remote work certainly poses a unique challenge and long-term questions about demand for office space in any downtown,” said Mark Fisher, the chamber’s chief policy officer.

However, he said, that could mean an opportunity for Indianapolis, which has a lower cost of living than most major cities, a fact that might draw companies looking for cheaper office space as well as remote workers looking for a less expensive place to live.

“Indianapolis is well positioned to see that investment in both people and business,” Fisher said.

And economists and urban-planning experts say the forces—including millennials’ preference for dense, walkable areas—that have fueled downtown population gains across the country are powerful and unlikely to abate.

“I think that the factors that cause people to move to cities are going to remain profoundly strong,” said Mike Hicks, director of the Center for Business and Economic Research at Ball State University. “What we’re seeing now in terms of urban unrest and the pandemic are unlikely to make mercurial changes to the economic conditions that cause people to want to move to cities.”

Even before the coronavirus hit, Indianapolis’ downtown was facing an increasing number of challenges—from the proliferation of panhandlers to increasing vacancies at Circle Centre, which no longer has an anchor department store.

Many downtown boosters also were deflated by the City-County Council’s rejection in 2018 of a plan to create an economic improvement district that would have raised $3 million a year to spruce up downtown and fund maintenance, marketing and public safety expenses.

Goldsmith said the health of downtowns is inherently fragile.

“When we began, there was a set of intricately connected pieces that I thought would help create a vibrant and continually successful downtown. The pieces were all carefully leveraged against each other,” he said.

“If you remove any piece of it, it is problematic.”

At this point, Goldsmith said, “the mayor is in a very difficult situation. We need to project both sides of the equation—that the city is sensitive to the growing poverty in the area, but the city is committed to security and safety.”

Thomas Cook, Mayor Joe Hogsett’s chief of staff, said he remains confident in downtown’s future, though he acknowledges many businesses are struggling. He said the administration is considering ways it can help but isn’t ready to provide details.

“The thing I would say about our downtown is that it is unique in many respects, but it is not unique right now in facing these challenges,” he said. “It doesn’t change the fact that we think we need to respond to this to the greatest extent we can locally.”

Larry Williams, president of the Indiana Black Chamber, said strengthening downtown—and the city as a whole—requires a more inclusive approach than Indianapolis historically has used.

“In the city, we say that we all work together, but if you look at nonprofits that are run by black people, they do not get the same respect or the same financial support as other nonprofits,” he said. “We are always considered grassroots and the others are considered big time.”

He praised the Central Indiana Community Foundation for supporting black-run organizations and for crafting a new mission last year to fight institutional racism. But “they shouldn’t be the only ones working on this,” he said.

And he said companies need to do far more to diversify their boards.

“If you have 17 people on a board and you have one person of color, that is a problem,” he said.

“We need to start putting more people of color on these boards, so you have a diverse voice and not the same voice.”

Jennifer Vey, senior fellow at the Washington, D.C.-based Brookings Institution, agreed that efforts to help downtowns that fail to encompass the issues that spurred the protests will fall short.

“I think what’s worrisome is if city leaders worry that, given the fiscal issues they are facing, that somehow there’s no time or resources to focus on equity issues,” she said.

“There can be no recovery if it’s not focused on equity.”•