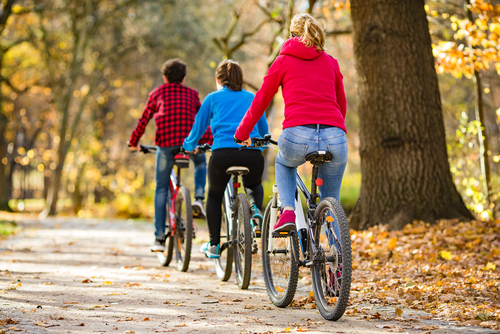 At first, when she found out school would be closing indefinitely, 16-year-old Alayna Hughes, from Eugene, Oregon, was excited. But then reality—and disappointment—set in.

“I really enjoy the social aspect of school, and socializing and being with my friends is such a big and important part of my life that I knew it would be a really difficult situation,” she says.

Wanting to explore outside, but unable to go anywhere, Alayna wandered out to her backyard and spotted two raised beds overgrown with weeds. Her mom has been doing a fair amount of gardening recently, and the unkempt beds inspired Alayna to give it a shot as well. With her mother, she cleared out the weeds and filled the boxes with dirt, then planted herbs and onions, bell peppers and carrots.

“Growing your own food and plants is a good way to interact with the world around you and do good,” Alayna says. “Getting outside refreshes your mind and body.”

Her revelation echoes the feelings of many other teens across the country who have—in the midst of the coronavirus pandemic—embraced new passions away from the confines of Zoom classes, YouTube, and video games. They’ve been gardening and hiking and bicycling with family members, and they’re building backyard ponds, skateboard ramps and climbing walls.

Mary DeMocker, author of “The Parents’ Guide to Climate Revolution: 100 Ways to Build a Fossil-Free Future, Raise Empowered Kids and Still Get a Good Night’s Sleep,” says time spent outside during the pandemic provides teens and young adults with opportunities to exercise agency by imagining something they want, then working to create it.

“Whether families or kids on their own are building an archery range in the backyard with a hay bale and target made out of cardboard and homemade arrows, or building sand castles or pillow forts or climbing walls, they’re asking themselves ‘What do I want, how do I get there, what resources do I need, and what happens if my plan fails?’ ” she says. “They’re developing the resources to critique their plans honestly, get outside input, and try again. It’s all practice for building the world that they want.”

DeMocker’s own kids, home from college, built a backyard climbing wall from plywood boards and two-by-four braces. Her son has spent hours a week drilling holes, carving holds, creating routes, and climbing. He’s also taken up skateboarding with a gang of other neighborhood kids ages 8 to 20, staying six feet apart as they teach each other tricks or go on epic rides around the city.

“Kids miss their friends, and they need to move,” DeMocker says. “When they emerge from an hour or two of a Zoom class, they’re frustrated and ready to get outside.”

Lyra Flinn, 17, gets that. She’s out hiking hours every day with her dog. “It’s funny, my mother-in-law asked if I was nervous about her being out on trails alone, but it never occurred to me to be nervous,” says Flinn’s mother, Amy Samson, a middle-school art teacher. “There are so many ‘high risk’ things that high school kids do. Hiking with a dog? Seems like the best thing possible.”

On her website, DeMocker offers a list of 100 activities to help families through the pandemic, such as hiking, bicycling, creating porch or backyard nature preserves and teaching kids to use hand tools and power tools to build structures outdoors.

Author Kate Albus, of Maryland, has two teens. Her family already enjoyed spending time outside together before the pandemic, and in April, they decided to walk and bike the C&O Canal towpath along the Potomac River. Albus created a checklist of landmarks, including Bald Eagle Island, Huckleberry Hill and Taylor’s Landing. “The kids have enjoyed checking the boxes and watching them fill up,” she says.

“Spending time outside every weekend has definitely helped me to stay calm during these times,” says her daughter Olivia, 14. “Without the hikes and bike rides, our family would probably go crazy being cooped up for so long.”

Luke Albus, 17, also looks forward to his family’s weekly explorations on the trail. “We’ve biked past dams and caves and lakes that I never knew existed, and it’s given me a greater appreciation for the world around me,” he says. “Physically, I feel really happy whenever we go on the trail, and it’s given me something to look forward to when there’s almost nothing else going on.”

There’s been plenty going on in Auden Flinn’s life as well; since school closed, the 15-year-old Oregon resident has painted his room and built a loft bed and played air hockey with his older sister Lyra in the garage when she’s not out hiking with her dog. Auden enjoys video games, too—in particular, the simulation car racing game Forza. But he knew he couldn’t spend months indoors on screens, and he missed his friends.

He had purchased a road bike before the pandemic with the goal of building up to 30-mile rides with friends. When social distancing rules hit, he took to the pavement and worked his way up to 70-mile rides, training in the hills of Oregon wine country several times a week with a friend.

“The adrenaline when you’re doing hard work on your bike is amazing,” he says. “I have a couple of rides I do on small roads, where it’s just the occasional car passing by. Nature has definitely changed since everyone’s staying in their houses. Everything is starting to come back, and it’s amazing to be out there and be a part of that.”

His mom, Amy Samson, agrees. “The biking has been about so much more than just biking,” she says. “He put himself out there on the Nextdoor app and did yard work to earn the money to buy the bike. He has flatted out, crashed, broken a derailleur, forgotten his snacks for a super long ride, learned to estimate time and distance when he has to be back home for practice, thought about how to social distance while riding with someone else. I think biking has been his best class.”

Samson has friends who hired full-time tutors when the pandemic started—friends whose kids are up at 8 a.m. five days a week doing online school and online coaching for sports. But she and her husband, a high school principal, prefer to let their teens choose the structure of their days.

“They nested for a while, they wasted a lot of time binge-watching ‘Grey’s Anatomy,’ they ate a lot of cookies and whoopie pies,” Samson says. “But then they settled into some sort of balance and moving their bodies around outside was part of that balance. It makes me wonder how we can hang onto the good parts of this time once life shifts again and they go back to a school routine.”

Alayna Hughes knows she’ll continue to grow food once things start to open up again. “It’s exciting, the idea of growing something at home that you can eat later, and it’s good for the environment,” she says. “Spending time outside is good for your health, and growing a garden is a great way to get out there. It’s given me a sense of accomplishment.”