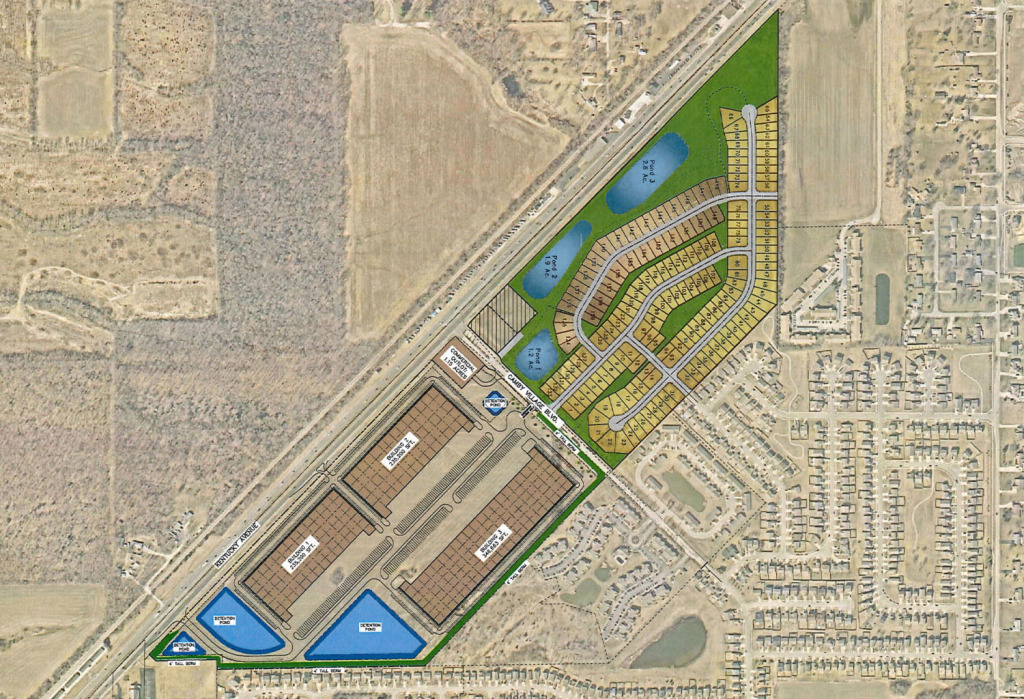 A conceptual site plan for the industrial and residential project from Camby Village LLC. (Image courtesy of the city of Indianapolis)

A pair of developers are teaming up to recast more than 120 acres along Kentucky Avenue in the far southwest corner of Indianapolis into a mix of homes and large-scale industrial buildings, despite objections from nearby homeowners.

The development would span about 123.2 acres, all of which is owned by Indianapolis-based Mann Properties. The two developers have agreed to buy the land from Mann, pending necessary project approvals from the city. The land would be split nearly evenly between Core 5 and Pyatt’s respective developments.

The industrial component would comprise about 817,000 square feet of speculative space across 56.7 acres, with two buildings of around 235,200 square feet and a third at 346,663 square feet. All of the buildings would be developed with only a handful of uses in mind, such as research and development, logistics or life sciences.

The buildings are expected to be designed in a way that would shield semi-trailer traffic from neighboring properties, with loading docks that face inward. The industrial portion of the project is also expected to have entrances and exits separate from those used by the neighborhood, as well as a six-foot berm and tree line that will limit visibility of the property.

The tallest structures on the industrial property could be about 45 feet tall, plus up to 25 feet of equipment attached to the roof.

Douglas Armbruster, senior vice president and managing director for Core5’s operations in Indiana, told IBJ that development costs for the industrial section have not yet been finalized. He said the buildings also have not yet been marketed to potential users.

“We don’t know for certain yet on the costs,” he said. “And it’s pretty difficult to market a product that you may or may not be able to build.”

He said if the project ultimately receives required approvals, Core5 hopes to break ground sometime in 2023—but he noted that continued turbulence in the economy could affect those plans.

Pyatt Homes, which has developed dozens of subdivisions across central Indiana, plans to build 133 single-family homes and another 52 homes in a paired-patio design, meaning every two units will share a wall.

The homes would be overseen by a new homeowners association, with the attached homes having their exterior maintenance handled directly by the group.

Representatives for Pyatt did not return a request for comment from IBJ.

Brian Tuohy, a real estate attorney with Tuohy Bailey & Moore who represents the development team, said during a Nov. 10 Metropolitan Development Commission hearing examiner meeting that the development is intended to alleviate concerns about previous efforts to develop the site solely as industrial.

The hearing examiner was asked to consider recommending approval to rezone the site—currently zoned as a mix of C-4 and C-S districts—to solely C-S, while also allowing certain industrial, dwelling and commercial uses (including a fueling station) on the land.

Property owner Mann, through its Camby Village LLC, made four commitments in hopes of securing approval. They include the creation of an 8-to-10-foot-wide multi-use path in the housing portion of the project; submission of industrial design elevations for full approval; the creation of the berm; and a promise to maintain the property and keep it neat.

Pat Andrews, chair of Decatur Township Civic Council’s land use committee, told the hearing examiner the group voted 25-2 to oppose the proposal at its October meeting because it does not want industrial development abutting neighborhoods.

In 2019, Core 5’s plans to develop four much larger industrial buildings on the entirety of the property were rejected by the hearing examiner. Those structures would have totaled about 1.5 million square feet. In 2020, the company received approval for a single, 600,000-square-foot building on the southern portion of the property, but never moved forward with the project due to constraints during the pandemic.

In each case, the Civic Council’s land use committee was opposed to the projects out of concern they could disrupt the adjoining neighborhoods that sit east of the property.

On Nov. 10, the hearing examiner ultimately recommended approval of the project following more than an hour of back-and-forth comments from Tuohy and Andrews.

The Metropolitan Development Commission will hear the rezoning request on Dec. 7. If approved, the matter would go to the City-County Council for a final hearing.