Home » Community development in Old Southside is on the move 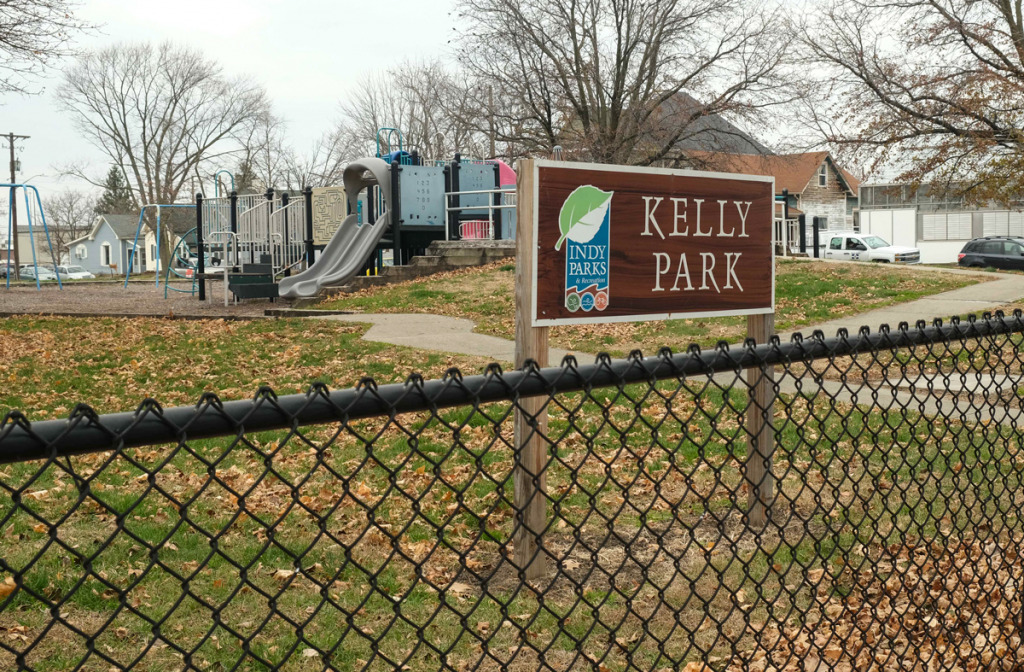 Community development just south of downtown is taking off as neighbors, businesses and others seek to make the area a place people want to live, work and visit, much like Fountain Square, Mass Ave and other thriving areas of the city’s core.

In 2018, the Old Southside was selected for a community development investment program launched under Mayor Joe Hogsett’s administration.

Since 2019 and through next year, Lift Indy will direct $4 million in investment to community development projects throughout the neighborhood. Many of those projects are already underway or will be launched in 2021.

And now the area is the focus of a panel of developers, planners, public officials and market analysts convened by the Urban Land Institute Indiana to help create a vision for the Morris Street and McCarty Street corridors, address connectivity problems and provide a blueprint for the type of development that’s both desired by the community and feasible.

Those are positive developments for an area that has long felt neglected and whose residents and business owners say is prime for redevelopment.

“What we want to see, and what we’re hopeful going forward, is, the south side will be a place where people want to live and work and dine and shop, just like other areas of the city, like Mass Ave and Fountain Square,” said Erika Wells, president of the Stadium Village Business Association and general manager of Chef JJ’s on South Street. “That’s what our goal is.”

In October 2018, the city announced that the Old Southside neighborhood—bounded by South Street to the north, Madison Avenue to the east, the CSX Railroad line and Adler Street to the south, and the White River to the west—would be the target of investments through the city’s Lift Indy program.

The program, launched in 2017, targets neighborhoods with grants the city receives from the U.S. Department of Housing and Urban Development to fund economic development opportunities, affordable housing, infrastructure updates and creative placemaking.

The Old Southside Neighborhood Association led the effort to win the $4 million it’s been allocated and chose the projects being completed. They include construction of affordable houses, a multifamily workforce housing project, a rebuild of Kelly Park, and streetscape improvements to South Meridian Street between McCarty and Arizona streets.

To date, six single-family affordable houses have been built, many on the south side of the neighborhood, in conjunction with the Indianapolis Neighborhood Housing Partnership. Originally, 13 homes were expected to be built, but now it appears funding might allow for 15, said Judith Essex, former president of the Old Southside Neighborhood Association. INHP is also offering an affordable-home-repair loan program for Old Southside homeowners.

For the multifamily workforce housing project, Indianapolis-based Crestline Communities is in discussion with the Archdiocese of Indianapolis to purchase the Sacred Heart Parish Hall to create affordable apartment units at South Meridian and Morris streets. Essex said it’s too early in those conversations to predict how many units might be included. 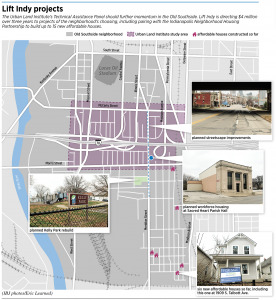 A big project in the program is the rebuild of Kelly Park, at the southwest corner of South Meridian Street and Kansas Street. The entire park will be reconfigured and include new amenities, such as workout equipment for adults, a walking trail and a shelter house that could host community concerts. The project also moves the playground equipment toward the back of the park, away from busy Meridian Street. Work is expected to begin in the spring, said Peter Marbach, the Old Southside Neighborhood Association’s current president.

“The park will be designed for full families, not just children,” he said. “It’s family activities, so everyone can get involved.”

The park is due for renovation, Essex said, and, given that it’s adjacent to the Concord Neighborhood Center, which uses the park for programming, the rebuild will help not only the neighborhood but also the kids who attend the center.

The most complicated project on the Lift Indy list is a face-lift for South Meridian Street from McCarty Street to Arizona Street—an area with several restaurants, including Shapiro’s Delicatessen.

The neighborhood association had hoped to use some Lift Indy funding to help beautify Meridian Street with landscaping. But the road is in desperate need of infrastructure improvements, which the city plans to address in coming years. Until then, Essex said, it doesn’t make sense to invest in landscaping.

But neighborhood leaders want something visual to eventually be added to Meridian Street. Ideas include a median and landscaping from McCarty Street to Moore Street and some sort of lighted feature under the interstate along Meridian.

Money has been earmarked for the infrastructure improvements, and the neighborhood association plans to begin discussing visual opportunities with the selected contractor next year, Essex said.

Essex, who moved to the neighborhood in 2012 and felt it was overlooked, said she’s grateful for the funding and what it’s been used to accomplish so far.

Marbach said the Lift Indy program is one of several changes that have brought attention to the neighborhood. One more: Two Chicks and a Hammer, the mother-daughter duo starring in HGTV’s “Good Bones,” has renovated several Old Southside houses in recent years.

“I moved back to the neighborhood in the late ’80s, and it’s a totally different area now than what it was then,” Marbach said. “It’s getting back to what it probably was once upon a time: a diverse area with people with multiple financial backgrounds and ethnic backgrounds that are living here in harmony.”

City development leaders say they hope the Urban Land Institute’s Technical Assistance Panel, which was called together this year to learn more about the near-south side, can further advance the Lift Indy objectives, building off existing momentum.

“The idea isn’t that that neighborhood is done and finished when we wrap up Lift Indy,” said Jenny Fults, administrator of the division of community investments for the city. “It’s that we’ve given it that initial funding that is needed to keep momentum going once we’re done and move out. … The whole working idea is that we kind of spark that development.”

The city paid $12,000 to help fund the technical assistance panel, which it convened in partnership with the Stadium Village Business Association, the Old Southside Neighborhood Association and the Bates-Hendricks Neighborhood Association. The panel studied the area between Morris and McCarty streets to the north and south and between Madison and West streets from east to west.

Technical assistance panels can help ensure that everyone involved in development of a certain area is on the same page, said Carmen Lethig, director of long-range planning for the city of Indianapolis. And they can serve as a guidebook in development decision-making.

Essex said the panel’s work won’t sit on a shelf collecting dust. It will provide insight to the groups trying to move development forward.

The panel, which is expected to submit a full report to the groups early next year, sought to answer the following questions through interviews with stakeholders: What is the vision for the study area? What types of development are both desired by the community and feasible for the market? What will it take to bring the desired development to the area? And how might future projects be enhanced and leveraged in the study area, and where are essential connectivity points, and how can they be enhanced?

The panelists’ preliminary findings say the near-south side should embrace its location between Fountain Square and the White River, while leveraging its proximity to downtown. They encouraged the neighborhood to get ahead of changes coming to Interstate 70 and to “stay true to your roots and emphasize identity, history, affordability, working-class character and ethnic diversity.”

The panel encouraged the neighborhood to pursue a spectrum of development to help alleviate hesitancy by some to enter the market, to offer many types of housing at varying price points, to favor rehabilitation and repurposing over demolition and ground-up development, and to focus on horizontal mixed-use development, which is often more cost-effective and less risky for developers.

The panelists said the neighborhood’s primary connectors—Morris, McCarty and Meridian streets—should be redesigned into “people-oriented corridors,” with sidewalks, trees, lights and bicycle facilities, aligning with the vision neighborhood leaders have for Meridian.

Lethig said nothing about the panel’s initial findings was surprising, but hearing from outside voices that the neighborhood’s location offers opportunity was eye-opening to some.

“It’s really not that far from downtown, but for some reason, it feels like it’s far from downtown, so that’s a huge opportunity,” she said. “Not only that, but the location being near the White River and near Fountain Square, there’s a lot of assets for them to build on. So I felt that that was something that really stuck out not only to me but for other members that participated.”

Marbach, the neighborhood association president, echoed those sentiments, saying the panel helped illuminate the importance of connections to surrounding areas, including the White River.

And news last week that Elanco Animal Health will build a $100 million headquarters campus at the former GM stamping plant just northwest of the Old Southside and that the state might expand White River State Park is welcome to him.

“That can only increase our visibility as far as being a part of this circle that goes around the center city,” he said.•