Home » Is Carmel’s city council less aligned with the mayor? 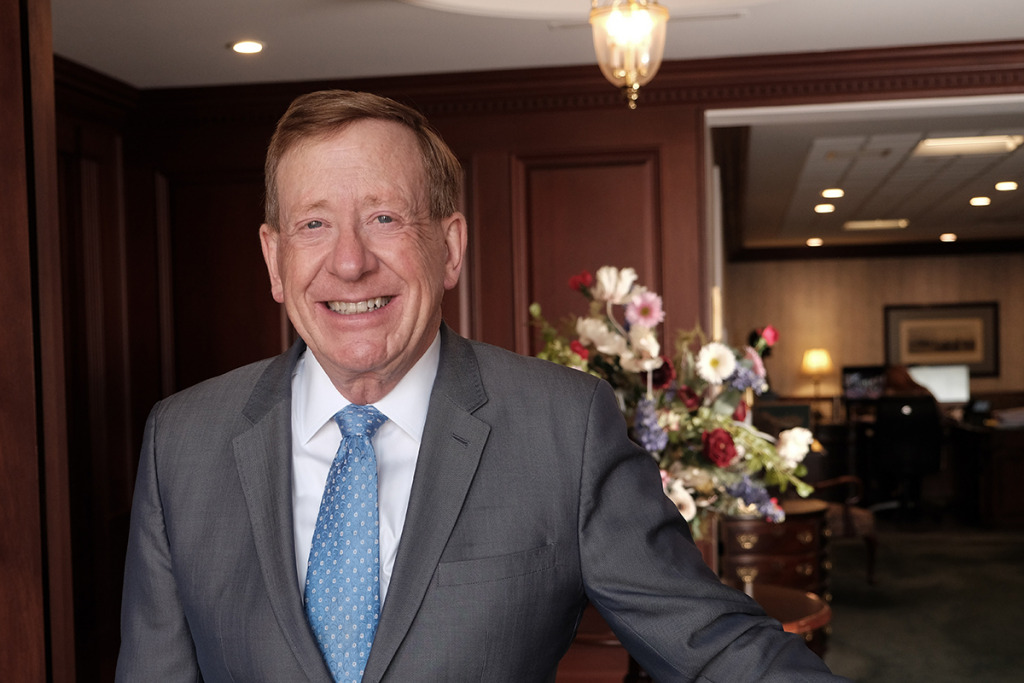 Mayor James Brainard says he and the city council are “working together on many, many areas. … I’ve had challenging councils, and this is not one of them.” (IBJ photo/Eric Learned)

A series of actions taken by the Republican-majority Carmel City Council of late is raising questions about whether members are becoming more skeptical of Mayor Jim Brainard’s vision for the city and subsequent spending.

Even before Carmel announced more than a year ago that its Hotel Carmichael project would cost $18.5 million more than the original estimate, some council members were already pushing to have more authority to review Brainard’s spending.

Since then, the council has passed ordinances giving it even more of a say in some day-to-day operations.

It’s charged the public art advisory committee with not only reviewing locations proposed by the city for public art but also the merit of whether the art should be purchased in the first place. It has limited the city’s use of new debt for public art and has called for a council review before the city acquires any property.

Most recently, the council passed an ordinance meant to clarify its ability to investigate city issues, like the Hotel Carmichael budget overrun and the city’s handling of employee complaints.

The current nine-member Carmel City Council has six members in at least their second term—four of them were aided to election in 2015 by donations of at least $20,000 from the mayor’s political action committee.

The following year, after Brainard-backed candidates ousted some of the mayor’s critics, the council voted to relinquish some of its oversight of city operations.

During its first meeting in 2016, the council gave the mayor the ability to spend money from the Supports the Arts Fund without council approval. At a later meeting, the council agreed to a request from Brainard to reduce its purview over the Carmel Redevelopment Commission’s contracts, new debt and budget. The council also voted to loosen its grip on other city operations, including city lawsuits.

Brainard told IBJ the changes were less about the council’s conceding power and more about adjusting roles to better conform with state law. He said he doesn’t feel the council’s recent actions represent an attempt to retake some control.

“We’re working together on many, many areas,” he said. “The vast majority of what I ask for, 99%-plus, was approved in the budget this year and last year. We’ve worked together well on COVID issues and more. I’ve had challenging councils, and this is not one of them.” 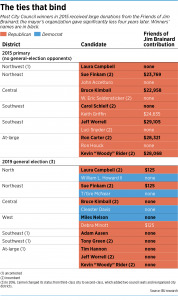 One reason the council might seem to be evolving now is because Carmel became a second-class city in 2016, which led to the council’s expansion from seven seats to nine as well as a redrawing of its districts. At the next election, in 2019, voters elected a Democrat for the first time in years.

Paul Helmke, a law and public-policy professor at Indiana University’s O’Neill School of Public and Environmental Affairs, is intimately familiar with the power dynamics between Indiana mayors and city councils. Not only was he the Republican mayor of Fort Wayne from 1988 to 2000, he also served as president of the U.S. Conference of Mayors.

He said Indiana is a “strong mayor” state, meaning the powers afforded a municipality’s executive are stronger than those afforded the council.

Still, even a few council members who disagree with a mayor can stand in the way.

“A single council member can make things better or make things worse,” Helmke said. “Councils are small enough that, if someone wants to go it alone, it can throw the whole system off.”

Recent actions that have regained some of the control the 2016 council ceded include:

◗ Expanded the advisory review of the Carmel Public Art Advisory Committee to weigh in on not just the location, but also the purchase of public art.

◗ Proposed a requirement for council approval for any land purchased through another $25 million bond.

◗ Passed an ordinance that aims to clarify the process by which the council can investigate city matters, including the recent handling of an employee complaint.

Adam Aasen, who became the southeast district council member in 2019, said he and the mayor really disagree only on details.

“When it comes to the macro, the big vision for the city of Carmel, I think most—if not all of us—share that vision,” Aasen said. “I haven’t heard people telling us to completely change the philosophy and direction of the city, and I don’t believe we should.”

He said the council’s recent actions aren’t about control; they’re about asking questions on behalf of constituents.

Unanswered constituent questions are what got now-Councilor Tim Hannon to pay attention to the city council for the first time in 2017. He had many questions about Brainard’s proposal to build the Hotel Carmichael and to take out a $5 million bond to buy an antique carousel.

Hannon launched a petition against the project that garnered hundreds of signatures and helped launch him into Carmel politics.

“My impression of the council at the time, which was really my first impression, was that they were a pretty homogenous group—definitely a group that tended to vote together, with the exception being Tony Green and sometimes Laura Campbell,” Hannon said. “The bulk of the other councilors seemed lockstep with the mayor’s agenda.”

Hannon, who won an at-large seat in 2019, said he ran as an outsider looking to bring balance to that power dynamic. He was one of the most vocal proponents of an outside investigation into the Hotel Carmichael’s overruns.

“I’m encouraged that we’re moving toward better balance, but it’s not a tectonic shift,” Hannon said. “These are kind of small steps in that direction.”

Perhaps another element that changed the face of the Carmel City Council was the addition of a west district—and the election of a Democrat to represent it.

Miles Nelson said he doesn’t feel like an outlier and that he works well with his Republican colleagues and the Republican mayor. He doesn’t see the council’s recent actions as wresting any power from the mayor, but he supports the idea that governments work best when differing viewpoints have a place at the table.

“Democracies are meant to be kind of messy; that’s what makes them special,” Nelson said. “People get involved in government to have a voice, not [to] just go with what got us here.

“Because we’ve been elected, we want our opinions and thoughts to count. I don’t think that means it’s to reduce the mayor’s authority; I think everybody understands the mayor has done wonderful things for Carmel,” he said. “We’re sharing the influence; that’s the goal.”

Laura Campbell, a council member since 2016 and the current north district representative, has led the charge on ordinances seeking to clarify the ways in which the council can conduct investigations. She said the investigations aren’t about the council’s gaining power but are about ensuring the city is operating appropriately.

“We just happened to have several things that occurred pretty close together, so it seems like a lot at once,” Campbell said. “I don’t think this is a political frustration. I think it’s just a number of things that have occurred within a couple of years of each other.”

And although the mayor doesn’t find the council to be challenging, many agree it is evolving.

“It’s kind of like a chess game sometimes,” said Sue Finkam, the council’s current president and northeast-district representative. “We’re all trying to do the best things for the city that we know how. We may have value or process disagreements, so we have to work within the powers given to each of us. I don’t think it’s a big change, but rather, an evolution.”

Rick Sharp, a former council member who served for 12 years before losing to Brainard in the 2015 Republican mayoral primary, said the council’s recent moves are little more than political theater. The council should have taken those actions—and asked more questions—earlier, he said.

“There seems to be this laissez-faire attitude, and whether the council is complicit in this, doesn’t have the stomach for a fight or is afraid of the mayor, I don’t know,” Sharp said.

Sharp said the council’s goal was to rein in the administration’s spending, but its members were painted as unruly.

Finkam, who joined the council in 2012, said she ran for reelection in 2015 as part of a slate of candidates who supported Brainard and wanted to restore the council’s image.

According to Finkam, those candidates included current councilors Jeff Worrell, Bruce Kimball and Kevin Rider; Ron Carter, who served on the council through 2019, when he lost his reelection bid in the primary; and Keith Griffin, who ran unsuccessfully in 2015.

She said the group wanted to ease the tensions between the council and the Mayor’s Office.

“We agreed as a slate that we weren’t going to operate that way,” Finkam said. “You didn’t see that in print, but we said, ‘If we get elected, this is how we wanted to work together.’”

Finkam said that attitude didn’t make the council any less powerful; it was just a conscious decision to be professional in its dealings with one another and the mayor.

“We’ve had very pointed and powerful conversations behind closed doors that aren’t very friendly, but they’ve gotten us to a better place overall, I believe,” Finkam said.

Each of those candidates received an in-kind contribution from the mayor’s PAC of $20,000 to $30,000 just before the primary election. While Griffin was not successful, the others won their races. Brainard’s campaign set up an office, shared phone-bank duties and paid for commercials for those candidates.

“I supported candidates that I believed would provide the best representation for the people of Carmel and needed support to communicate with voters,” Brainard told IBJ.

Detractors have pointed to those contributions as the reason the council was more complacent starting in 2016.

“In one way or another, they owed the mayor. So, until 2019, there was a rubber-stamp council,” said Carmel resident Bill Shaffer.

Shaffer is a frequent critic of Carmel government. He runs a social media account commenting on the city and writes letters to local media outlets highlighting his concerns about the city’s debt under Brainard.

Sharp agrees with Shaffer’s sentiment and said Brainard was able to secure council members’ loyalty with campaign contributions. “Maybe the mayor didn’t get every brass handrail or statue, but he got another one,” he said.

Finkam said tying the contributions to the council’s votes is nonsense. She said those candidates who ran to reform the city’s image spent more than a year discussing infrastructure goals with the mayor, so that’s why the 2016 council was more aligned with the administration than were preceding councils.

“I worked hard to campaign and earn the votes in my district. I did not feel then, nor do I feel now, any sense of debt to the mayor for any in-kind contributions made,” Finkam said. “Additionally, I would not vote for the mayor’s initiatives if I thought they were in conflict with what was best for the city.”•

4 thoughts on “Is Carmel’s city council less aligned with the mayor?”