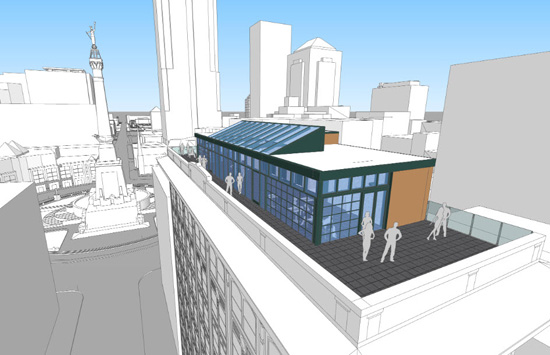 The redevelopment of the King Cole building will include creation of a rooftop bar. (Image courtesy of city of Indianapolis)

The King Cole Building will undergo nearly $21 million in renovations under the owner’s plan to convert the 104-year-old building near Monument Circle into a Hilton-branded hotel aimed at millennials and economy travelers.

Indy Propco LLC, which has owned the 11-story building at 1 N. Meridian St. since January, wants to turn the property into a Motto by Hilton that would have at least 116 rooms, according to plans recently filed with the Indianapolis Historic Preservation Commission.

IBJ reported in August that the Delaware-based limited owner planned to vacate much of building to make way for a new hotel, displacing several tenants, including Jimmy John’s and The Boiling on the ground level and Kuaba Gallery and a beauty salon on the upper floors.

Several tenants have told IBJ that they have either already moved out or have been asked to vacate. Both The Boiling and Jimmy John’s are expected to leave for new locations in the coming weeks.

The filings also show Qdoba, at the northwest corner of the building, would retain its location.

IHPC documents indicate Indy Propco plans to spend $20.9 million on the overhaul, which includes the addition of a new penthouse bar and an overhaul to the building’s lower façade.

Initial floor plans show the second floor would have about 12 rooms, and floors 3-10 would have 13 rooms. The filings do not include a floor plan for the 11th floor, though Indy Propco is expected to ask the IHPC for permission to demolish an existing penthouse to replace it with a rooftop bar featuring indoor and outdoor seating.

Indy Propco seeks to replace part of a windowed wall on the north side of the building with vertical, 12-foot-wide cantilevered addition on floors 3 through 10 that extends about seven feet into and above the alley. Without the addition, the floors wouldn’t be able to accommodate a 13th room.

The IHPC is expected hear the owner’s various requests—which also include a new blade sign, a glass rooftop railing, and restoration work on exterior windows, wood and terracotta—during its Wednesday meeting.

Indy Propco is seeking historic tax credits for the project from the National Parks Service, according to filings with the city.

The group plans to overhaul the first floor of the building, creating a new entrance on its south side for a proposed cafe and lobby area with indoor and outdoor seating.

Hilton launched the Motto brand a year ago, describing it as a “micro-hotel with an urban vibe in prime global locations.” Among the first cities with agreements for a Motto were San Diego, Boston, Washington, D.C., and Savannah, Georgia, along with some international locations. None have opened yet.

Motto’s standard rooms will be about 163 square feet, according to the Hilton website. Hilton said the hostel-like hotels will give travelers “access to the best location” in the city, along with flexible spaces and affordable rates.

Indy Propco is believed to be affiliated with The Gettys Group. The company’s listed address on King Cole property records, 55 W. Wacker Drive in Chicago, is also the address for the hospitality-focused design, branding and procurement firm.

The hotel is one of several that has been announced in recent months. Other recently announced projects on the south side of downtown include an Avid hotel at 324 Wilkins St.; an Even Hotel at 808 S. Meridian; and a Cambria hotel at 850 S. Meridian St.

Indianapolis-based developer Loftus Robinson recently was given the green light by the IHPC for alterations it has proposed to the former Odd Fellows Building at 1 N. Pennsylvania St., which will be converted into a Kimpton hotel.

Bruce Bodner, who owns Morrison Opera Place, 49 S. Meridian St., said in September he is asking the IHPC for approval of a $60 million project turning that building into a mix of residential units and a hotel.

Indianapolis-based Ratio is the architect on the project.

A representative for The Gettys Group did not return a call requesting comment Monday.