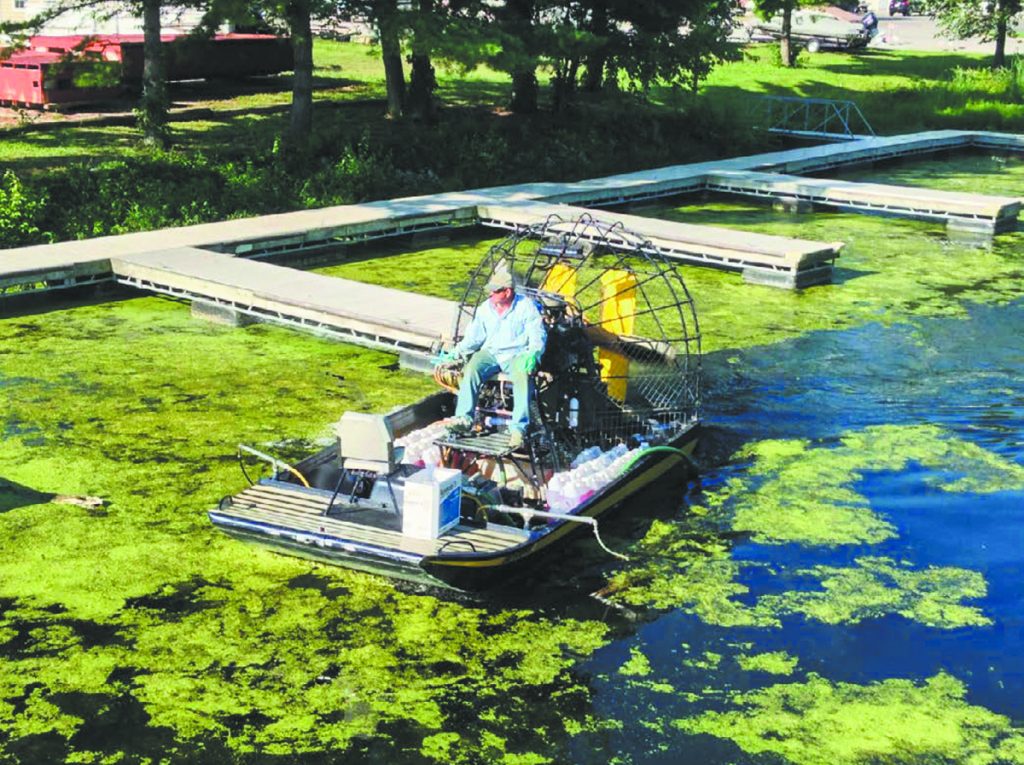 Some Geist residents fear the reservoir eventually will be unusable for fishing, swimming and boating. (photo courtesy of Geist Conservancy District)

On some days, the seaweed and algae on Geist Reservoir and its inlets grow so thick that some residents wonder if they should swim in the lake or just walk on it.

“It’s awful,” said Matt Troyer, an attorney who has lived for 13 years in a cove on the east side of the reservoir. “It appears as though you could walk across the cove with all the weed growth and algae and everything else.”

More than 1,400 Geist households want the state to approve a special taxing district to raise millions of dollars annually to provide regular maintenance to the reservoir. Otherwise, they fear, the reservoir—which is only 10 to 12 feet deep in many areas—eventually will be overrun with silt and unusable for fishing, swimming and boating.

But other residents oppose that move. They say the taxes would benefit mostly lakefront property owners, not the people who live a few blocks away, without scenic waterfront views from their back decks and picture windows.

“In my particular neighborhood, there are homes that are a quarter-mile from the lake,” said John Domokos, a consultant who is a founding member of the Geist Reservoir Tax Opposition Alliance. “They don’t see it. They don’t smell it. They don’t drive by it. And they would pay the same tax rate as someone who is lakefront.”

The debate casts a glare on divisions in one of central Indiana’s wealthiest areas, where some waterfront mansions are worth more than $5 million. The area is home to the rich and famous, including athletes, business titans and celebrities.

But not all of the shoreline is equally tony. In some areas, especially on the south end, near the dam, some houses sell in the $300,000 range.

Nearly all of the shoreline is, however, private property—belonging to homeowners and boat clubs. In 2017, Fishers Mayor Scott Fadness announced plans to build a 70-acre public beach and park called The Cove, making it the only spot on the lake open to the public, aside from a few restaurants and a public boat launch. However, that project is years from completion.

The former Indianapolis Water Co. created Geist Reservoir in 1943 by damming Fall Creek, to provide drinking water for the city. In more recent decades, the 1,800-acre reservoir, now owned by Citizens Energy Corp., has been transformed from a sleepy water supply to a recreational mecca and upscale residential hot spot.

But in the process, it has become so overrun with weeds, algae and silt that many residential areas along its shoreline need to be dredged out every few years at a cost of hundreds of thousands of dollars, paid for by one of the area’s 40 homeowners associations.

Citizens Energy says it has spent $1.2 million since 2015 on dredging in the reservoir to remove sediment and maintain storage capacity. But it says it does not dredge for recreational purposes, which forces residents to deal with thick seaweed and growing amounts of sediment along residential boat docks, neighborhood coves and in boating channels.

It said it has the same policy along Morse Reservoir in northern Hamilton County, which is popular for its beaches and boating.

“Citizens does not manage the reservoirs for recreational or aesthetic purposes,” company spokesman Dan Considine said.

‘Nature takes back over’

Since residential development began in the 1980s, 37 developments with about 4,000 houses have sprung up around the reservoir, spanning parts of three counties—Marion, Hamilton and Hancock.

Much of the reservoir’s incoming sediment flows in from those adjoining residential areas and from the up-basin corn belt. Dirt from farms and developments has emptied in the streams and flowed down into Geist Reservoir.

“Like everything else that’s man-made, if you create a lake and then don’t do anything, eventually nature takes back over,” Troyer said.

For about two decades, the job of maintaining the reservoir has fallen to the all-volunteer Geist Lake Coalition. Over the years, members have gone door to door around the reservoir to ask for donations and sponsorships. In that way, they have raised and spent millions of dollars on various maintenance projects.

But now the coalition says the lake needs more help than can be done by a group of volunteers knocking on doors for $20 or $50 donations.

“Geist Reservoir is in dire need of dredging, as well as catch basins that can be cleaned out with a regular maintenance plan,” said Brian Hall, owner of Indianapolis-based Repro Graphix Inc. and the coalition’s president. He lives on the southeast side of the reservoir, across the street from the lake.

The coalition said the lack of stream bank remediation is causing shoreline instability, resulting in heavy sediment load. It also warns that invasive aquatic plants and species, such as Eurasian watermilfoil and zebra mussels, are destroying native species and clogging watercraft.

Geist Lake Coalition has formed what’s known as a conservancy district, or a special-taxing district that has the power to assess properties, and it’s now seeking government sanction.

The coalition estimates that the conservancy district, which would operate in perpetuity, would raise $2 million per year.

The Indiana Department of Natural Resources defines a conservancy district as a way for landowners to set up a taxing district to assist with water resource management. Statewide, there are more than 90 such districts, which work to control floods, sewage and pollution.

The Geist Conservancy District would encompass all the developments that abut the waterfront—and in some places, extend several blocks back from the water.

Over the past 18 months, the coalition has gathered 1,453 signatures (each household is limited to one signer)—representing nearly 40% of the households in the district. That is higher than the 15% required by state law.

In November, the coalition submitted the signatures and petition to Hamilton County Court. If the court validates the signatures, it will send the petition to the Natural Resources Commission for hearings and findings of facts on the feasibility of a conservancy district.

The petitioners will have to prove that the benefits of the proposed conservancy district—solving or lessening the problems in the lake for recreation—will outweigh the costs.

If the commission agrees, a board of elected officials from the conservancy district—which would operate much like a town council, elected by members of the district—would govern the finances and the projects.

But the plan already has hit a snag. Citizens Energy asked the coalition to join forces with it to change part of the state law concerning conservancy districts, including a portion that gives conservancy districts eminent domain—the power to expropriate private property for other uses.

The utility said it was concerned that a conservancy district could interfere with its operational rights at the reservoir, and thus its ability to provide water to customers.

The coalition said it wants the conservancy district to keep the powers of eminent domain to allow it to install and clean out catch basins, among other reasons. But it agreed to exempt Citizens from the provision, and lined up Sen. Jim Merritt, R-Indianapolis, to introduce a bill.

In a hearing last month before the Senate Environmental Committee, Merritt argued the coalition had gathered widespread support.

“People understand that the condition of the lake, the caring of the lake—even if you don’t have lakefront property—is important for property values,” Merritt said.

The coalition has said 75% of the signatures it has collected in the district are from people who don’t own lakefront property.

Several homeowners testified that the reservoir needed substantial help, and that the conservancy district was the best way to provide it.

“A volunteer organization has put a Band-Aid on this lake for a long time,” said resident Cory Peter, president of Pendleton-based 101 Inc., which turns food byproducts into other uses, such as livestock feed and biofuels.

Carol Murphy, past president of the ShoreWalk Homeowners Association, near the south side of the reservoir, said her association spent hundreds of thousands of dollars to do a complete dredging of their cove in 2005, and thought it would take care of the problem for 20 years. 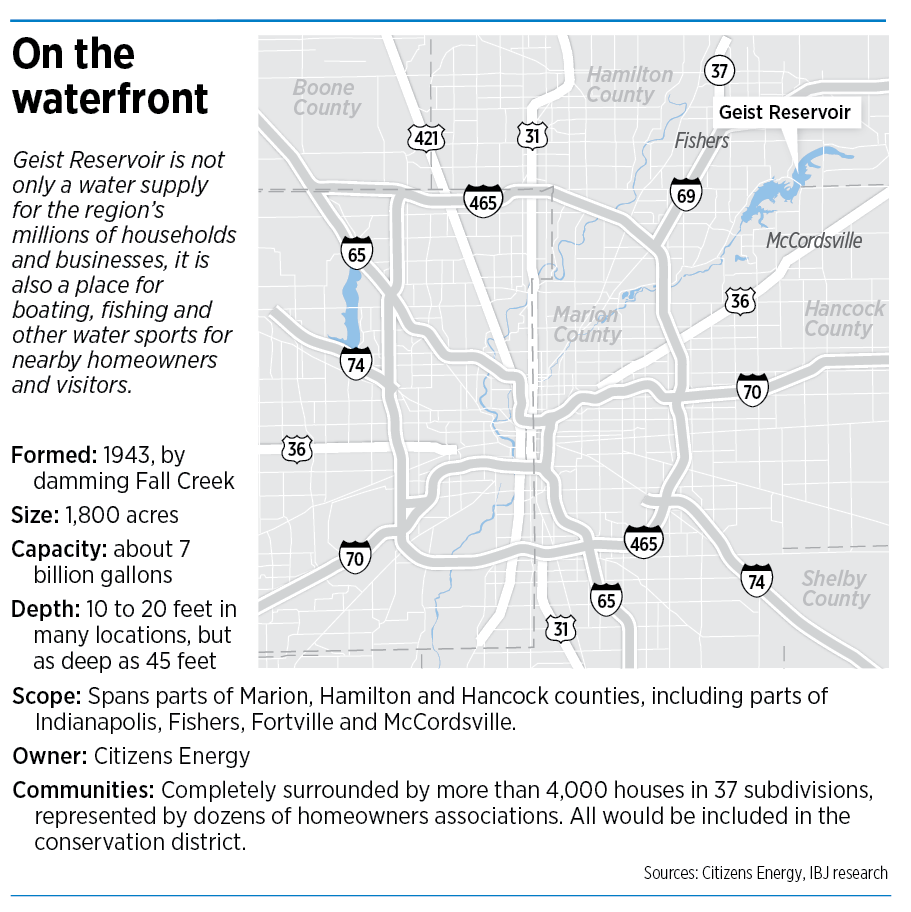 The Indianapolis Yacht Club, which has 103 boat docks, said it has donated $2,000 to $5,000 a year to the Geist Lake Coalition. It now supports the conservancy district but initially opposed it—in part because it would face no cap on the amount it could collect from homeowners and would be free to set any rate.

Domokos of the Geist Reservoir Tax Opposition Alliance said a large percentage of people in the district are not interested in boating or swimming and oppose uncapped taxes.

He would not say how many property owners had signed petitions in opposition. To block a conservancy district, opponents have to get signatures from 51% of them.

They say the reservoir is in danger of tipping into the toxic zone, due to the buildup of blue-green algae, a bacteria that is coating large parts of the lake and can cause disease in humans and other animals.

“It’s short-sighted, because their property will be impacted if the reservoir goes toxic,” Hall said. “If it was to go toxic, it would affect those off the water, blocks away and maybe even half a mile away.”

They say that dire scenario has occurred at other reservoirs, including Grand Lake in St. Marys, Ohio, which was overcome with blue-green algae blooms and was forced to close to recreational use from 2010 to 2013. Cleanup efforts there have cost more than $150 million.

“Geist Lake is a tremendous asset to this area,” said Sen. Andy Zay, R-Huntington. “I would hate for it to continue to fall behind.”

The Senate Environmental Committee voted 7-4 last month to advance the bill. But once it got to the Senate floor, it was amended to remove the proposed district’s power of eminent domain and to limit the amount it could raise annually to $2 million a year. The Senate passed the amended bill, 46-2.

The House Environmental Committee on Feb. 18 unanimously passed the bill, advancing it to the full House for a vote.•