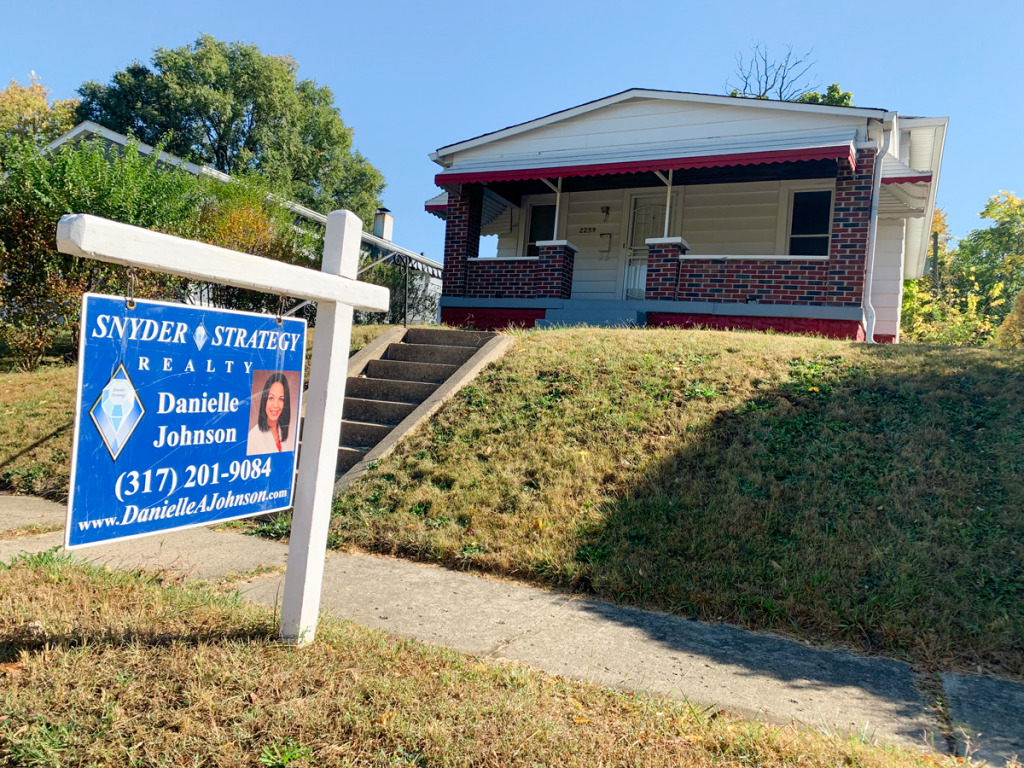 Residents of majority-Black neighborhoods—such as Martindale-Brightwood, where this Rural Street home is for sale—are more likely to have their mortgages applications rejected than residents of white-majority neighborhoods. The house is on the market for $56,900. (IBJ photo/Lesley Weidenbener)

Residents living in majority-Black neighborhoods in Marion County have a harder time obtaining home loans than those living in other neighborhoods, a recent analysis by the Indiana University Public Policy Institute found.

Although redlining—discrimination in banking and lending based on someone’s race or where they live—has been illegal since the Fair Housing Act passed in 1968, analysts for the institute found that inequities in home-loan lending still exist.

And in the past five years, two banks doing business in Marion County—First Merchants and Union Savings—have been accused of redlining.

In the more recent case, First Merchants settled with the U.S. Department of Justice and the Fair Housing Center of Central Indiana last year, but did not admit wrongdoing. As part of the agreement (documented in the Sept. 25 IBJ), the bank is providing $1.12 million in subsidies over four years to cover down payments and closing costs for mortgage originations in majority-Black census tracts. The money is expected to result in $20 million to $30 million in mortgage originations.

The IU institute’s analysis used data from the Federal Financial Institutions Examination Council—and required by the 2018 Home Mortgage Disclosure Act—to examine home loans that were applied for and denied in Marion County. It found that the county’s homeownership rate is 54% but only 42% in majority-Black neighborhoods.

In majority-Black neighborhoods, the loan application rate, the rate at which people apply for a home loan (calculated by dividing the number of applicants per group by the population 25 years and older in each group) is 2%. It’s 3% in other neighborhoods.

And the loan denial rate is 11% compared with 7% in other neighborhoods.

That data shows that Black residents, and even white or Hispanic residents, living in majority-Black neighborhoods often face barriers when trying to purchase a home, experts told IBJ.

Those neighborhoods often have higher poverty rates, and their residents are low-income. Those factors can lead to poor credit histories and high debt loads that stand in the way of purchasing a home.

“Owning a home is one of the most important ways families can build wealth and increase their financial security,” said Joti Martin, a policy analyst at the IU Public Policy Institute. “Yet for far too many families of color, the dream of homeownership may still be out of reach because of inequities in home-lending practices.”

In majority-Black neighborhoods, Black residents are less likely even to apply for a loan.

The brief found that the loan application rate for Black residents is 1%, while the rate for both white and Hispanic residents in those neighborhoods is 3%.

And when Black residents in those neighborhoods do apply, they are more likely to be denied a mortgage. The denial rate for Blacks was 14%; it was 13% for Hispanics and just 8% for whites.

The institute’s brief doesn’t provide details about why loans in those neighborhoods were denied, and the data the group analyzed doesn’t provide personal details like credit scores or debt-to-income ratios. Both are used to determine whether an applicant can obtain financing.

Amy Nelson is director of the Fair Housing Center of Central Indiana, which analyzes mortgage data to identify banks that might be practicing discriminatory lending and has launched lawsuits against banks in the past. She said only lenders can say why the inequities exist.

Her organization wants to see banks and lending institutions make at least 14% of their loans to Black residents. It settled on that number by applying the overall homeownership rate (54%) to the nation’s African American population (28%).

“There’s a significant number of lenders in our community that are not lending at rates we think are sufficient and that are redlining and discriminating,” Nelson said. “We certainly have a number of investigations going on at this time.”

She said the homeownership gap in America between whites and Blacks is wider today than when the modern-day mortgage system began.

“There’s a history of discrimination,” she said. “And persons of color have not had the same opportunities for homeownership and to build wealth that they can pass down to their kids and families like white families can.”

The Greater Indianapolis Chapter of the Indiana Mortgage Bankers Association, a professional trade group that serves as a resource and advocate representing real estate lending in Indiana, did not return a message seeking comment for this story. 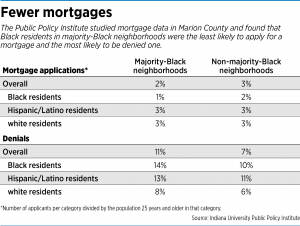 PNC Bank told IBJ it does not comment on third-party studies because it cannot be certain of methodologies used.

“But we can share that our business model is focused on serving our customers and our communities,” Marcey Zwiebel, director of corporate public relations, said in an email to IBJ. “We offer a full portfolio of mortgage products, including for low- and moderate-income individuals and households, as well as a full suite of home equity loans and lines. We also offer programs from Fannie Mae, Freddie Mac, FHA and VA.”

Recently, the bank announced a $1 billion commitment to help end systemic racism and support economic empowerment of Black and low- and moderate-income communities. A majority of that funding will be spent on community development banking, with a focus on boosting the quality of life in low- and moderate-income neighborhoods through financial education, consumer programs and community development lending and investment.

Moira Carlstedt is president and CEO of the Indianapolis Neighborhood Housing Partnership, which helps primarily low- and moderate-income people by providing affordable mortgages, home-repair loans and education. She said both real and perceived barriers keep low- and moderate-income people, who disproportionately are Black and brown, from even applying for a home loan.

Real barriers include low credit scores, high debt-to-income ratios and limited funds for a down payment. They also include limited access to information about those topics.

INHP offers educational credit courses that can teach residents how to pay down debt, increase their credit scores and budget.

“The population we serve often has credit problems, struggles getting access to unbiased information that enables them to help budget, understand their credit, be successful renters and go through home buying,” Carlstedt said. “Is there a challenge geographically? I’m not qualified to say. I am qualified to say low- and moderate-income people struggle with access to information.”

The perceived barriers can be even harder to overcome. Some residents, for example, are so sure they won’t qualify for a mortgage that they never ask.

Carlstedt encourages people who assume they can’t qualify for a mortgage to ask the question. INHP can do an assessment and help determine whether a mortgage is a possibility.

“It is not uncommon for someone to come to us and say, “I know I’ll never qualify,’” she said. “And in fact, they will qualify. Their credit is acceptable, but they built up in their mind that nobody is there to help them.”

Amina Pierson, director of the community development corporation for Martindale-Brightwood, a majority-Black neighborhood, said her organization actually spends much of its time working with people who are trying to stay in the home they’re already in.

And that’s in part because housing is so unaffordable for many people—and a barrier to moving more people into homeownership.

“Renters in these neighborhoods may be unable to attain homeownership due to lower incomes, lower credit scores, or higher debt-to-income ratios,” the Public Policy Institute’s brief reads. “Since renters are more likely to be housing-cost-burdened—spending at least 30% of their income on housing—they may be less likely to accumulate wealth or save money for a down payment on a home.”

What can be done to increase home lending in these neighborhoods? The Public Policy Institute provides some recommendations.

◗ Lenders should connect residents to federal, state and local loan programs that offer affordability assistance. A lack of money to cover a down payment or closing costs is one of the biggest factors limiting homeownership, the brief states. Offering support, such as down-payment assistance, can potentially increase homeownership in these households by relaxing traditional mortgage requirements.

◗ Invest in practices, programs and partnerships that can build trusting relationships in majority-Black communities. Financial institutions should ensure equitable banking terms for all customers, prioritize diversity among their lending staff, reevaluate staff compensation structures that might discourage working with lower-income individuals, and partner with local organizations that have strong ties and investments in majority-Black neighborhoods in Indianapolis, the brief states.

Nelson, the director of the Fair Housing Center, said there’s not one easy way to increase home ownership in Black neighborhoods or for Black people. Some of the problems are systemic and long ingrained in mortgage processes.

“We need to educate people about the issue, so they understand [that] how we got where we are today did not just happen,” she said. “It’s been a series of things over decades. It’s going to require changes to counter that.”•