Guests of the new Marriott Place hotel complex will be able to walk as much as three-fourths of a mile to the Indiana Convention
Center, Lucas Oil Stadium, Circle Centre mall and even the Statehouse without ever stepping outside.

That’s because the 1,600-room, four-hotel project will add two walkways that connect to
an extensive network of skywalks and underground pedestrian paths.

The walkways are the first new spans for the city’s skywalk system in almost a decade, since the 615-room Indianapolis
Marriott Downtown opened in 2001 with a convention-center connector.

With the new spans, the system will connect 12 hotels with more than 4,700 rooms—the most of any downtown in the United
States, according to Marriott. Other cities like Minneapolis have large skywalk systems, but they are designed more for the
convenience of downtown office workers, not as convention amenities.

The first new span will connect the $425 million JW Marriott-anchored hotel complex to a state-owned
parking garage over West Street, and the second will connect the garage to the convention center over
Maryland Street.

The hotel developers are splitting the cost of the
skywalks with the state since the connectors will bring in new customers for the parking garage, said
Jeremy Stevenson, vice president of development for locally based REI Investments, which is developing
the complex in partnership with Merrillville-based White Lodging.

The walkways will cost $12,000
to $15,000 per square foot—or $1.5 million to $1.8 million each, Stevenson said. They are on schedule
for completion by the fall. Three hotels in the complex—a Courtyard by Marriott, SpringHill Suites
and Fairfield Inn—are scheduled to open next month. The flagship JW Marriott is scheduled to open in February 2011.

The span over West Street in particular represents an important milestone:
It will connect the skywalk system and the downtown core to the front door of White River State Park
over what had been a daunting eight-lane pedestrian divide. 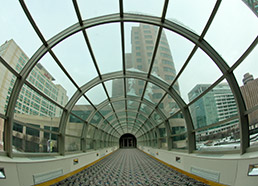 A covered walkway from the convention center to the
Westin protects visitors from the elements. (IBJ Photo/Robin Jerstad)

Developers shelved a plan for a tunnel or bridge
connecting the hotel complex with the park itself because such a connection was cost-prohibitive; instead,
the state plans to install a signalized crosswalk between the hotel complex and the Indiana State Museum.

In addition to the 4,700 rooms the skywalks will connect, almost 3,000
more are available within walking distance of the skywalk system, said Julia Watson, a vice president
for not-for-profit city booster Indianapolis Downtown Inc.

The city’s most architecturally interesting connector is
the Artsgarden at the corner of Washington and Illinois streets, which connects Circle Centre mall to
Claypool Court and the Conrad Indianapolis.

Another memorable span
is the three-story Circle Centre mall bridge over Maryland Street that features retail stores; most shoppers
don’t even know they’re crossing to the next block (that was the goal of the design).

The span that will
connect the Indiana Convention Center to Lucas Oil Stadium will be at street level—the first of
its kind for the system—and is under construction now and scheduled to open this year. The path that connects Claypool
Court to the Statehouse and state office buildings is underground and used mostly by office workers, not convention visitors.

The city does not have specific requirements governing the look of skywalks,
said Jeff York, a city planner. But the spans can’t be built without a vacation of air rights above
city streets, so planners review them on a case-by-case basis.

Factors
considered include construction materials and how a bridge relates to the buildings it is connecting. All the bridges
have some glass, but too much can make them pricey to heat and cool.

“We want to see these mimic, not imitate, the facades they connect,” York said.

One of the potential drawbacks of a skywalk system is that it can put a damper on street-level activity, said Greg
Jacoby, executive vice president at locally based Browning Day Mullins Dierdorf Architects, a firm that helped design both
Circle Centre and the Artsgarden.

When Cincinnati tried to move retail
to the same level as its skywalks, it practically killed the street life.

That’s part of the reason Circle Centre’s developers built the mall’s second elevated walkway, which connects
over Illinois Street to a parking garage, on the third level, making it less visible from the street.

“I don’t think [the skywalks] have taken away from street activity here in Indianapolis,”
Jacoby said. “The reason is, we’ve been really good about putting in retail and wide sidewalks
with trees. It’s just a convenience factor. Most people take the walkway if it’s raining
or cold, but otherwise will walk on the street.”

In a perfect
world, visitors to the city would take a scenic stroll along Washington Street to return to their rooms at the
JW Marriott, said Aaron Renn, a local scholar of urban planning who writes the blog Urbanophile.

“The reality is that you first walk down a wide and uninviting Washington Street, mostly
lined with government buildings, hotel complexes and parking garages—not stores, cafes or other
places of interest—then have to cross West Street,” he said. “It simply isn’t
realistic to expect visitors to brave that, especially in the winter.”

Renn said the skywalks may have “over-optimized” downtown for convention events, making it seem lifeless when
there are no events. Still, he supports the hotel links.

Pedestrian
connections don’t have to preclude street-level activity. Renn noted that Minneapolis’ skywalk system
has extensive skywalk-level retail. And even Chicago has an underground pedway system that links downtown buildings, showing
the value of weather-proof connections even in an eminently walkable city.

“Having those protected hotel connections is an important part of the sales package for Indianapolis as a convention
destination in a cold-weather city,” he said. “It is a key asset few other cities can match and a big plus for
conventions.”•