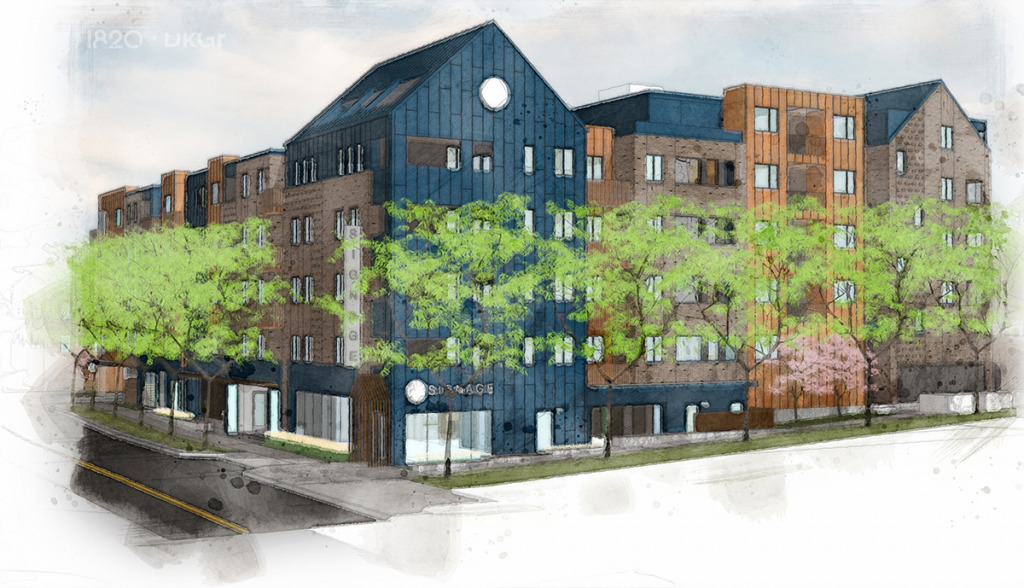 The 103-unit project would be located in the 1100 block of East Ohio Street. (Rendering courtesy of 1820 Ventures)

An ex-Milhaus executive plans to develop an apartment project on the former Angie’s List campus on the near-east side—the first of potentially many projects he’s pursuing in the neighborhood.

Jeremy Stephenson, who started 1820 Ventures a year ago after leaving Indianapolis-based apartment developer Milhaus, said his firm plans to spend about $16 million to develop the yet-unnamed project in the 1100 block of East Market Street.

The 103-unit project would occupy about 0.71 acres near the middle of the 18-acre Elevator Hill campus, which is in the midst of redevelopment since the departure of Angie’s List.

Current plans call for a five-story podium building with 36 studios, 47 one-bedroom units and 20 two-bedroom units. There would be a courtyard at its center and parking on lower levels.

Indianapolis-based DKGR LLC is the architect on the apartment project.

The development would be the first new-build for 1820 Ventures, although Stephenson said he is also pursuing some adaptive reuse projects in the Midtown area.

“The basic premise here is to try to create a new feel for Elevator Hill campus and in the Holy Cross neighborhood,” Stephenson told IBJ. “There’s an opportunity to do a lot of different things on the site.”

The land for the project is under contract with Elevator Hill ownership group Fred Able LLC, contingent upon rezoning and variance approvals from the city of Indianapolis.

1820 wants to rezone the land from a mix of D-8, dwelling, and MU-2, mixed-use, to only MU-2. It’s also asking for variances to allow for a 72.5-foot building and smaller setbacks from the road. The Metropolitan Development Commission Hearing Examiner is expected to consider the requests Thursday.

Stephenson said he is working closely with the owners to “reimagine” the campus and bring new life to the site, while also reusing some existing historical structures.

He declined to share specifics of what other projects might be in the works. That will come “later this year,” he said, but Stephenson added it won’t be limited to multifamily developments.

“We’ve been working through that process with the owners,” Stephenson said. “This is not just about multifamily, it’s really about taking a look at neighborhoods, and how to holistically [pursue] good, responsible developments.”

Rob Coombes, a broker with Shook Realty, which handles leasing on the property, acknowledged the development is one of “several opportunities on campus with partners and partnerships, including with Jeremy and his company.” He said the owners plan to work closely with the firm on additional projects.

“Jeremy has an excellent track record in Indianapolis, as well as across the United States, in putting successful multifamily projects together, while also focusing on bettering the community,” Coombes said.

The owners of Elevator Hill campus—which sits between East Washington and East Ohio Streets directly east of the combined Interstates 65 and 70—have been quietly ramping up investment in the property for nearly two years. Former Angie’s List CEO Bill Oesterle is the lead investor in the site, which is roughly four city blocks.

The site’s highest-profile tenant is Ball State University, which consolidated its operations to the Glass Building on the western edge of the property in mid-2019. Circle Kombucha is also a tenant in the development.

And IMPD operates a substation on the first floor of the historic firehouse on campus, Coombes said. IMPD does not pay rent on the space, he said.

And IBJ Corp. co-owners Bob Schloss, Nate Feltman and Mickey Maurer—who was an Angie’s List board member—each have stakes in the project.