Home » A slow time for fixer-uppers

Old, new, big, small, residential, commercial … when it comes to the real estate market, almost nothing is exempt
from the effects of a sustained economic slump.

Just ask the folks at Indiana Landmarks, which, among its many preservation missions, buys and resells historic properties
statewide. 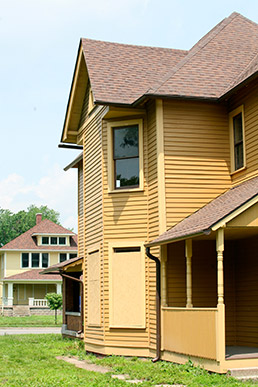 This 2,800-square-foot Queen Anne home on College Avenue in Fall Creek Place (also seen on the cover) was built in the
late 1890s and is priced at $89,900. (IL Photo/ Perry Reichanadter)

Locally, the long-running FLIP program—or Fund for Landmark Indianapolis Properties—has seen a marked downturn
in the resale of historic buildings. To cope with the economic reality, overseers have cut prices, looked for outside sources
of funds, and considered reconfiguring the program to improve the long-term prospects of hidden gems.

“It’s a challenging environment,” said Mark Dollase, vice president of preservation services at Indiana
Landmarks. “Those urban pioneers who used to be there … those people just aren’t there.”

Established in 1974, FLIP takes historic homes and commercial buildings that have been neglected, performs exterior renovations,
then relists the properties for sale. Buyers must agree to a set of protective covenants as they go about refurbishing the
interior.

Currently, Indiana Landmarks lists 15 Indianapolis properties for sale on its Web site, with prices ranging from $1 to $89,900.
Around the state, the not-for-profit is marketing another 25 properties.

Homes and other buildings have lingered on the market for up to five years, which is not necessarily abnormal, even amid
healthy economic conditions. 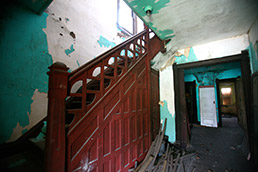 “These are, I would say, unusual properties. If they were completely restored homes, the market would take care of
them and they would be snatched up in six months to a year,” Dollase said. “It takes a focus on the part of the
buyer to go in and invest in one of the worst properties in an area. We do eventually find the end user and they work their
magic.”

In the more experimental days of the FLIP program, Jim and Marjorie Kienle stepped up and purchased a dilapidated home in
Chatham Arch. The home was moved to Lockerbie Square in 1976, a watershed time in the revival of that neighborhood.

The Kienle property, an 1872 Carpenter Gothic home, was one of several houses saved from demolition by Indiana Landmarks
that eventually wound up on the same Lockerbie block. Needing all new electrical, plumbing, HVAC and more, the home was in
“dreadful condition” at the time of the purchase, said Marjorie Kienle.

A lot has happened in FLIP’s 36-year history. During that time, the group has seen 305 properties purchased and rehabbed
by private owners. That progress has slowed tremendously over the past couple of years as prospective buyers have been thinned
out by the poor economy.

In 2009, Indiana Landmarks completed three FLIP sales. So far this year, Dollase said, there has been a “ton of interest
and a lot of showings,” but no transactions.

Even if interest stays high, financing remains a huge stumbling block for those wanting to dive into the historic real estate
market.

“Easy money is not out there anymore,” said Joe Huntzinger, vice president of mortgage lending for the Indianapolis
Neighborhood Housing Partnership.

Huntzinger serves as chairman of the FLIP Council, a group of real estate agents, bankers and developers who create a biannual
strategy for the Indiana Landmarks staff. As part of last year’s plan, the group recommended several changes that will
help the program adapt to shifting market conditions.

Among those changes, Indiana Landmarks is looking at completing more turnkey rehabs of properties, allowing it to court buyers
who can’t finance an expensive and lengthy renovation.

It is also moving toward more partnerships with community development corporations, school systems and developers to help
spread out the costs.

In the meantime, across-the-board price decreases are expected to bring more buyers to the table. In 2009, Indiana Landmarks
implemented a 40-percent markdown on its entire portfolio—a painful but necessary move.

The resulting drop in income means FLIP, which operates with a revolving fund, can’t turn around and buy as many endangered
properties as it would like. The program must wait for sales to occur before it can add to its portfolio.

Barring an uptick in activity, FLIP may get a shot in the arm from fund-raising activities.

“Indiana Landmarks is looking to do some form of capital campaign that is likely to involve some recapitalization of
the FLIP program,” Dollase said.

A few notable properties illustrate the financial difficulty in which FLIP finds itself.

The most expensive Indianapolis property available through Indiana Landmarks can be found at 2351 N. College Ave. in Fall
Creek Place, one of the most active areas for FLIP projects. The group bought the 1897 Queen Anne house in 2007 for $36,250
and invested $80,000 in a new roof, siding, gutters and paint. It’s listed for $89,900.

For a connoisseur of historic architecture, the home is a steal, according to Dollase.

“It’s architecturally a very interesting home that has a high degree of integrity intact,” he said.

At 6358 N. Michigan Road stands a Greek Revival farmhouse covering 2,600 square feet. Indiana Landmarks, which is now asking
$64,900 for the home, replaced the roof, partially restored the front façade, and refinished the original front door.
That property was reduced from $99,900.

Other holdings include a 900-square-foot Victorian Cottage in the Martindale-Brightwood area that’s listed for $5,000
and a Willard Park home going for $34,900.

A complete list of properties can be seen on the group’s website at www.historiclandmarks.org under the For Sale tab.

Even as it takes financial hits, Indiana Landmarks remains committed to the FLIP program.

“For us,” Dollase said, “it’s about the mission—saving a house and leaving behind something
good in the neighborhood.”•