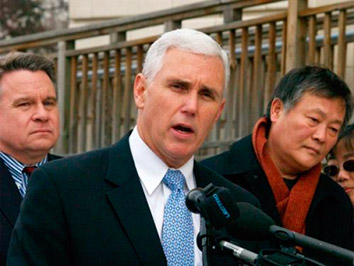 The day before he launched his campaign for governor, Rep. Mike Pence discussed what he said will be a strong grass-roots campaign.

What he wouldn't talk about were estimates he might raise close to $25 million in his bid to hold the governor's office for Republicans next year.

So can the big guy, the favorite candidate of the establishment, also claim grass-roots support and carry the mantle of the people? The Pence campaign thinks so.

Campaign aides say they are close to signing up coordinators to lead efforts in each of the state's 92 counties. Those efforts will no doubt include a great deal of door-knocking and phone-banking to identify supporters—the nuts and bolts of building the popular groundswell.

"We believe we'll have the resources we'll need to win," Pence spokesman Matt Lloyd said when asked about the campaign's grass-roots efforts.

It's not unusual to see high-dollar campaigns employ populist rhetoric. When President Barack Obama's 2012 campaign manager, Jim Messina, unveiled the strategy for what could be the nation's first $1 billion campaign, he focused on five specific points. Third on the list? "Grow the grass roots in every state."

Some argue that when large sums of money come in to play, any grass-roots notions are lost. As one activist at the center of Indiana's tea party movement sees it, a grass-roots effort must be the work of passionate, unfunded masses.

"It's the people rising up from the bottom, fighting the big guys," said Monica Boyer, founder of Kosciusko Silent No More.

Others note that even the big guys need to reach voters, and doing so can cost money. While social media networking and evolving communication technologies have made growing a grass-roots base far less grueling than in years past, it's also become more expensive.

For example, veteran Indiana Republican campaign operative Jennifer Hallowell notes many gubernatorial and presidential campaigns have replaced cumbersome phone banks and call lists of yore with computer databases constantly updated by volunteers who dial potential voters from their computers and log responses. Even if such operations have no less of a grass-roots focus than those ruled by phones, pens and paper, they cost far more money.

A grass-roots focus has not always been the political vogue. Throughout much of the 1990s, national campaigns put their money and efforts into big media buys, relying heavily on wholesale messaging to make their case. Hallowell said the contested 2000 presidential election changed all that, as politicians everywhere took note of the importance of being able to account for each vote—state by state, county by county and precinct by precinct.

That was the national trigger that campaign at all levels should get more serious about programmatic grass-roots activities," she said.