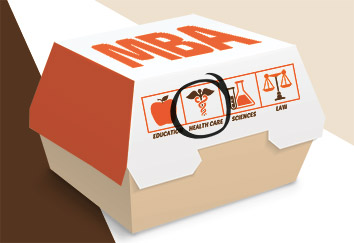 Dr. Alen Voskanian had no intention of enrolling in a traditional MBA program even though the Los Angeles palliative-care physician was researching graduate programs to learn more management and financial skills.

The first problem was time: Voskanian works more than 50 hours a week as a medical director for VITAS Healthcare and has three kids under age 10 at home.

The second issue was focus: Voskanian wanted a program specific to health care.

But then Voskanian found an online reference to a new MBA program for physicians at Indiana University’s Kelley School of Business. The program required monthly sessions in Indianapolis, but the rest was conducted online.

“It wasn’t a modified or light version of an MBA,” Voskanian, 42, said, in contrast to many MBA programs for physicians he had researched. “I felt like I was getting a complete MBA in an academic setting from a good institution.”

Business schools around Indiana and the nation are having success attracting students to a growing number of specialized MBA programs, like the IU program for physicians.

In 2011, Indiana Wesleyan University started an MBA for nurses working to receive their master’s in nursing. And the University of Notre Dame has a joint MBA-JD program for attorneys.

Business schools have been forced to get creative by a “perfect storm” of forces, Kesner said.

The Great Recession prompted many employers to stop tuition reimbursement for MBA programs.

At the same time, graduates of MBA programs no longer enjoyed the automatic bump in pay that usually came with the degree—and was critical to paying off its high costs.

The forces pushed down the numbers of students taking the GMAT test—required for entry by most MBA programs. Applications and enrollment also fell.

From 2009 to 2013, the number of MBA students plunged nearly 40,000—a 30-percent decline, according to the Virginia-based Graduate Management Admission Council.

That decline came after two decades in which the number of MBA programs proliferated around the country.

“In any market where you have excess entry, there’s going to be a shakeout period,” said David Hummels, a Purdue economist who is interim dean of the Krannert school. Surviving in such an environment requires setting yourself apart from competitors, he added. “One way you can do this is, you can offer greater specialized programming.”

Hummels noted that the situation has been exacerbated even further because top 10 MBA programs, such as the University of Pennsylvania’s Wharton School of Business, have ramped up enrollments, putting pressure on all schools ranked below them.

Purdue’s Krannert School, whose MBA program is ranked No. 21 by U.S. News & World Report, has responded by shrinking the number of MBA students it enrolls but expanding the number of other types of master’s programs, in such fields as finance.

The number of Krannert students taking a full-time or weekend MBA has fallen nearly 20 percent since 2010, from 370 students to 298. But growth in Krannert’s specialized master’s programs, as well as its executive and STEM MBA, has pushed overall graduate enrollment at Krannert up 4 percent, to 654 students.

Some schools, such as Wake Forest University in North Carolina, have shut down their traditional MBA programs entirely.

The Indianapolis operation of IU’s Kelley School has seen its MBA students fall from 138 in the 2009-’10 school year to 122 in the 2014-’15 year. But the MBA for physicians has boosted the overall numbers, admitting 36 students last year.

Beyond sheer numbers, changing demands from employers and students have also pushed MBA programs to specialize.

Employers that were still hiring MBA graduates increasingly demanded that those students be ready to work in that employers’ industry from day one.

“Industries are looking for people with particular expertise. Business schools aren’t creating programs and looking for demand; demand is driving the programs,” Robert Sullivan, chairman of the Association to Advance Collegiate Schools of Business, told Fast Company magazine when IU launched its MBA program for physicians.

On top of that, working professionals in the prime age for earning an MBA—age 25 to 40—are used to having products and services tailored to their specific desires.

“That’s the age group that has become quite accustomed to ‘having it their way,’” said Kesner, referring to the ad slogan Burger King launched in the mid-1970s and revived several times. “They also want their education customized.”

Steve Tokar, director of the MBA program at the University of Indianapolis, said responding to that desire for customization is a matter of life and death now for business schools.

“Unless you can do mass customization, you’re going to be out of business,” he said.

For years, he noted, UIndy has customized MBA programs for specific employers, such as Allison Transmission, Franciscan St. Francis Health and Sallie Mae.

But now, some industries are going through so much change in their business models that leaders in those fields are hungry for business skills tailored to their needs.

That’s true in the medical field, especially, Kesner said, where the 2010 Affordable Care Act and unprecedented pressure from employers are transforming the way health care providers are evaluated, contracted and paid.

That’s one reason, Kesner added, that physicians from California to Connecticut have signed up for IU’s MD-MBA program.

“I realize now how much I miss working with other disciplines on systemic issues,” Dr. Thomas Ciulla, an ophthalmologist and retinal surgeon at Indianapolis’ Midwest Eye Institute, said in an email. “It has been a lot of work, but I have really enjoyed learning about business and the health care system. Medicine needs a voice during all of the change in health care and I now feel better equipped to be that voice.”

Voskanian, the Los Angeles physician, said the MBA program has helped him view major projects in his company—such as adopting an electronic medical record system—from perspectives beyond how it affects his work with patients.

“Physicians are in a great position once they learn the business skills, because they have clinical skills already,” he said. “They are the best people to lead the health care system of the future.”•