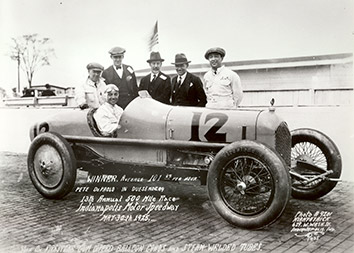 In the 1920s, Indianapolis was one of the most innovative cities in the nation.

If not quite the Silicon Valley of its day, the city held a rank similar to Seattle or San Diego today.

But after “the dark tragedy of the roaring twenties,” Indianapolis lost its edginess for decades and only recently has begun to regain it.

From 1919, when the soldiers returned home from World War I, until the stock market crash in 1929, Indianapolis enjoyed the fruits of what historians call the city’s Golden Age—a 40-year period starting in about 1880 that saw Indianapolis flourish economically and culturally.

High-end auto companies, such as Marmon, Stutz and Duesenberg, pushed the envelope on engineering and luxury, winning races at the Indianapolis 500 and winning the hearts of the growing ranks of the nation’s wealthy.

The Duesenberg 1929 Model J, made at an Indianapolis factory, has become such a symbol of the 1920s that a replica of one was used in the 2013 film version of “The Great Gatsby”—even though that story is set in 1922.

It was in Indianapolis in 1923 that Eli Lilly and Co. figured out how to scale up production of insulin, turning a university discovery into a treatment available to diabetics around the globe. In so doing, Lilly pioneered the R&D-based model that undergirds the modern pharmaceutical industry.

From Indianapolis, Booth Tarkington penned his two Pulitzer Prize-winning novels: “The Magnificent Ambersons” in 1918 and “Alice Adams” in 1921. Both were later made into films. “Alice Adams,” starring Katharine Hepburn, was an Oscar nominee for best picture in 1935.

Indianapolis participated in the nation’s first mass youth rebellion. The rabble-rousers wanted to drive their parents’ cars to clubs that featured a shocking mix of illegal alcohol (Prohibition started in 1918), sensuous dancing, revealing women’s clothing (some even danced without underwear), and jazz music, a new style that came from African-Americans.

“It just shows you what a bustling place this was,” Nelson Price, a local journalist and historian, said of Indianapolis in the 1920s.

While today’s society has been remade by the IT revolution, the society of the 1920s was being remade by the Industrial Revolution. Midwesterners were on the leading edge of this transformation Tarkington wrote, disapprovingly, in “The Magnificent Ambersons.”

“They had one supreme theory: that the perfect beauty and happiness of cities and of human life was to be brought about by more factories; they had a mania for factories,” he wrote.

The Midwestern United States was the most productive manufacturing center on the planet, said James H. Madison, an Indiana University professor known as the dean of Indiana historians. Indiana and Indianapolis were latecomers to the Industrial Revolution—since Indianapolis didn’t get railroad lines until 1847—and were trying to catch up to the pack.

By 1919, Indianapolis ranked 23rd among leading cities for worker productivity, according to the Census Bureau’s 1920 survey of manufacturers. In that year, Indianapolis had nearly 50,000 wage earners in factories churning out a bevy of products—especially food, but also automobiles and parts, books and magazines, railroad equipment and medicines.

Manufacturing wage earners in Indianapolis averaged about $1,100 in annual pay in 1919—but they added more than $2,600 apiece in value to the raw materials they worked with, according to Census data.

By 1929, productivity in Indianapolis’ factories had risen 40 percent, to more than $3,700 per wage earner. That marked the seventh-fastest growth among 28 leading metro areas tracked by the Census across that decade, and moved Indianapolis up to the 20th-most-productive city in the nation.

First, the city was well-connected to the rest of the country. Train travel brought people to Indianapolis in large numbers, whether or not this was their final destination.

Train routes from New York or Baltimore or Cincinnati to Chicago or Detroit or St. Louis stopped in Indianapolis. Passengers often would spend the night or even a couple of days, noted Price, the local historian. This included such celebrities as George Gershwin and Walt Disney, as well as presidential and vice presidential candidates.

In 1922, more than 6 million people passed through Indianapolis’ Union Station (even though Marion County had just 348,000 residents).

Today, the annual number of passengers that come through Indianapolis International Airport is 7.2 million, even though the Indianapolis area is nearly six times more populous than it was in the 1920s.

After city leaders spent the past 35 years building up a tourism industry centered on sports and trade shows, Indianapolis now attracts 26 million visitors a year. But that’s still a smaller multiple of the region’s population than was the case in the 1920s.

Second, Indianapolis drew in ousiders at a rate it did not for the rest of the 20th century. Marion County’s population grew 32 percent in the 1910s and 21 percent in the 1920s, which means it was attracting large numbers of residents from outside its borders, not just relying on the growth of its native families.

Less than 9 percent of Indianapolis’ residents were foreign-born in the 1920s—a far smaller proportion than was the case in Chicago, Detroit and New York. However, Indianapolis had more immigrants in 1920—in actual numbers—than it would again until the 1990s.

Not until the 2000s did Indianapolis’ percentage of foreign-born residents finally recover to the levels of a century ago.

The Duesenbergs moved to Indianapolis from Iowa. L.S. Ayres came from New York. And Madame C.J. Walker, the nation’s wealthiest black woman, moved her entire beauty products company from Denver to Indianapolis in 1910. Walker wanted access to Indianapolis freight railroad lines, which connected easily to all the major cities east of the Mississippi River.

She joined a city that then had the highest percentage of black residents north of the Mason-Dixon Line. By 1920, 11 percent of Indianapolis’ residents were black, nearly five times as high as was the case in Chicago and New York.

Third, Indianapolis had clusters of small companies. The two major industry clusters in the 1920s were high-end auto companies and insurance companies.

The insurance cluster waned, but enough of it remained to spawn significant businesses such as Anthem Inc. and CNO Financial Group Inc. But not until the 1990s and 2000s, with the development of an IT cluster focused on measured marketing, did Indianapolis regain something like the thriving cluster it had with auto manufacturing in the 1920s.

Urban economists have long argued that a cluster of small businesses leads to faster growth than having large companies.

“Economic growth is highly correlated with an abundance of small, entrepreneurial firms,” wrote Ed Glaeser, an urban economist at Harvard University, in a 2009 paper for the National Bureau of Economic Research.

Those characteristics waned in the decades after the 1920s.

For all the innovation of the Indianapolis auto companies, they still approached cars as holding the same basic function in society as fancy buggies and carriages—a privilege of the wealthy elite. They failed to scale up, as the Detroit automakers did, to handle what Henry Ford call his “democratization of the automobile.”

Some Indianapolis automakers failed in the 1920s, unable to compete with the low-price cars churned out in Detroit. The Great Depression delivered the coup de grace to Indianapolis’ auto cluster, although the mid-century auto boom was so huge that Indianapolis actually got richer as a satellite of Detroit than it had ever been as a hub of auto innovation. 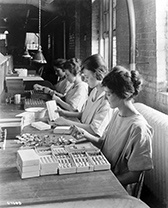 Workers at Eli Lilly and Co., such as these in 1919, helped launch insulin in 1923. (Photos courtesy of W.H. Bass Photo Co. Collection, Indiana Historical Society)

Eli Lilly became a pharmaceutical powerhouse. But it kept nearly all its functions in-house, meaning there was never a cluster of pharma-related companies that developed in Indianapolis. City leaders didn’t formally start trying to build one until 2002.

Stricter immigration policies passed by Congress in 1924 caused the proportion of foreign-born residents to fall steadily in Midwestern cities for four decades.

Yet Indianapolis also hurt itself by telling most of the world it was not welcome.

City leaders in the 1920s celebrated Indianapolis as “this 100-percent American town”—which was code for low numbers of immigrants, particularly Catholic immigrants, according to James Divita, a retired historian who taught at Marian University in Indianapolis. They also boasted that the city “is drawing its population from surrounding counties and states rather than from the immigrant tide,’” Divita wrote in an essay in the 1994 “Encyclopedia of Indianapolis.”

And then there was the Ku Klux Klan.

During a six-year stretch, from 1921 to 1927, the Klan had a meteoric rise, forming a chapter in every county in the state and signing up an estimated one out of every four adult males.

The Klan of the 1920s promoted a “pure” white Protestant Christian nation and traditional family values—with plenty of intimidation shown toward those who didn’t go along.

The Klan essentially took over the state government in the election of 1924, helping Republicans sweep to large majorities in both houses of the General Assembly and win the Governor’s Office. A year later, Klan-backed candidates won Indianapolis’ mayoral, city council and school board elections.

But the Klan’s influence collapsed after its Grand Dragon, D.C. Stephenson, was jailed for raping and biting a young woman, leading to her death. When the governor declined to pardon him, he started spilling his political secrets.

Indiana was not the only Klan state of the 1920s—Oregon, Wisconsin and the southern states also experienced a surge in membership. But the national notoriety of the Stephenson case caused the memory of the Klan in Indiana to live on for decades.

The impact of the Klan is what Madison, the IU historian, referred to in “Hoosiers: A New History of Indiana” as “the dark tragedy of the roaring twenties.” It was perhaps the worst example of what he views as a common Hoosier trait: tiptoeing cautiously into the future while trying to hold on to an older social order.

The Ku Klux Klan established a chapter in every Indiana county in the 1920s. (Photo courtesy of the Indiana Historical Society)

“It reflects that backward-looking tendency that Hoosiers have always had of looking back to a time when things were hunky-dory and God was a Hoosier,” Madison said.

Until the 1920s, “the Indiana idea”—celebrating a simpler past in the face of a bewildering present—earned the state a leading place in the United States because it “satisfied a national yearning for nostalgia, escape, simplicity, and humor,” wrote J. Kent Calder, the former managing editor of the Indiana Historical Society’s magazine in a 1994 essay in the “Encyclopedia of Indianapolis.”

That’s what Indiana’s most famous writers of the time—including Tarkington and James Whitcomb Riley—gave to the nation.

But the Klan channeled this nostalgia into a destructive form that left a bad taste in the nation’s mouth. Combined with the setbacks of the Depression and Indiana’s post-World War II status as a well-fed vassal of Detroit, Indianapolis lost the innovative character it had during the Roaring ’20s.

“Long term,” Madison said, “the Klan was bad for business.”•