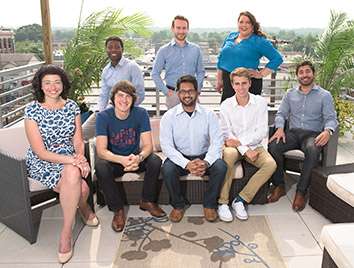 None were born before 1985. Three made “30 Under 30” lists in Inc. and Forbes. All lead some of the most promising companies and organizations in Indy’s burgeoning tech space.

Meet Evan, Adrian, Santiago, Ilya, Max, Anurag, Yaw and Denver. They’ve been executives for at least three years—bootstrapping and collectively raising more than $12 million in venture capital and employing about 150 people along the way.

Lower barriers to entry in the tech industry have paved the way for these (and other) young tech executives. It also helps that they don’t have kids to support. With mostly mid-five-figure salaries, they’re more interested in putting cash into their businesses than into their bank accounts.

There’s nothing wrong with graduating college and landing an entry-level job. But these entrepreneurs mostly took another path.

Evan Burns, 27, and Adrian France, 28, co-founders of The Odyssey, started their college media company in 2009 and stuck with it after graduation. The same is true for Santiago Jaramillo, the 25-year-old CEO of Bluebridge Digital, who pulled in $100,000 in revenue from his dorm room when he launched his firm in 2011.

Max Yoder, the 27-year-old CEO of Lesson.ly, said his entrepreneurial bent started at home. He grew up in Goshen, which was hit hard by the Great Recession, and can recall his mother’s fear of being laid off. She never was, but Yoder compared her experience to that of his father, who owned a funeral business.

“I got to watch how it worked for my dad, who was kind of in control of his destiny, and I got to watch my mom never really know if the rug was going to get pulled out from under her,” Yoder said.

“And I don’t have the constitution for a world where I have to constantly worry about the rug being pulled out from under me.”

A tech startup is never an easy venture, but it’s markedly easier than it was a decade or so ago. Among other factors, tech infrastructure isn’t as cost-prohibitive as it once was, and a recent explosion in cloud computing has led to operating and distribution efficiencies.

The idea of starting a manufacturing business is actually more daunting, said Yaw Aning, 30, who co-founded tech consulting firm Sticksnleaves in 2010. “You’ve got to get a huge investment of capital up front to build systems and processes before you can actually get to building a product that ships. Tech kind of breaks down those barriers and says, ‘You can get something in front of people very quickly.’”

“In technology, if you wait to build a finished product,” Rekhter said, “you’ve already missed the boat. Somebody else has already done it and they’ve already got the customers sold on it.”

Deals including ExactTarget’s $2.5 billion sale to Salesforce in 2013 have spawned a surge in money, talent and investor attention in the Circle City (Lesson.ly, Bluebridge and The Odyssey have former ExactTarget executives as investors), along with a pool of experienced mentors that young tech execs have tapped.

“In my case, there were a lot of people here who were willing to invest time [in me],” Yoder said. “The fact that people took time out of their lives to help was incredibly important to me and made me not only want to, once I got here, stay, but also invite more people.”

Jaramillo, who grew up in South America and Florida, said he was pleasantly surprised at how generous Hoosiers were with their time and connections. “I had people who … I questioned why they were spending time with me, giving me time for coffee, when [Bluebridge] was just an idea.”

Burns, of The Odyssey, said the cost of living and doing business can’t be overlooked. “If you’re in San Francisco or New York, the cost of hiring even entry-level people is multiples what it is here—for the same type of talent.”

Rekhter said, “It’s really cool to think about the disproportionate number of universities that we have here: IU, Notre Dame, Purdue, Ball State, DePauw, Rose-Hulman. These are awesome universities on a national scale, a world scale.”

Aning said millennials in particular want to believe in the companies they’re working for. They want to hear the story behind the idea, learn how that idea affects the world, then advance it.

“We’re getting to this point where companies are building their cultures off of perks,” Aning said, “but so much more of why millennials want to join companies is purpose.”

France said about 85 percent of The Odyssey’s roughly 50 employees are under age 35. She said the firm keeps them engaged by giving them a voice in strategic decisions, including advertising campaigns.

“They love it and feed off of it,” she said. “They get really bought in when they know they’re part of the reason why the company is growing and why it’s moving forward.”

“It has to be money,” Yoder said. “I mean, we just don’t have a lot of institutional dollars around here.” He said the area has a growing pool of angels willing to take risks with early-stage companies, but the region could use more venture capital firms.

Jaramillo said Indianapolis could use more software developers, but so could every city. “Technology is going into more and more industries, and the demand for developers is far outpacing the supply.”

“It’s easy to say, ‘This company is located on the coasts, so it must be good.’ But I’d love to see a concentrated effort to say, ‘Before we do that, let’s look at what’s here.’”

Many of the individuals in this cohort have traveled to at least a dozen countries, and a few were born overseas. They pointed to travel’s inspirational effects.

Hutt said many of her peers have done a great deal of traveling, and they’re able to integrate those experiences into their businesses now, “as opposed to feeling like, ‘Oh, I have to work a bunch of years before I have all these experiences.’”

Several of the young executives weren’t comfortable disclosing their salaries, but they took their best guesses on what the range was for the group.

Some didn’t take a salary their first year in business, including Yoder.

“Quipol was my first try at entrepreneurship,” he said about his Internet polling startup. “It failed, but I shut it down before it cleaned out my bank account, so I still had runway for Lesson.ly.”

The idea is not to get rich quick, some said, but to build enduring companies and keep enough equity for potentially big payouts later.

“Most of us want to reinvest as much into the business as possible,” said Rekhter, who has a 40-percent stake in DoubleMap, which was completely bootstrapped. “So I’d be surprised if anyone is paying themselves six-figure salaries.”

Aning, of Sticksnleaves, said when he chills, his mind goes straight to business. “So to decompress, I’ve got to go play sports.”

Burns said he can hardly relax knowing that important tasks need to be handled. “Honestly, the best way to decompress for me is getting stuff that matters done.”

Jaramillo said the back yard of his new north-side home near the White River helps him relax. Hutt and Rekhter, who each live in Mass Ave, stroll to nearby establishments to take their minds off business.

Hutt said getting a dog helps, to which Jaramillo replied, “I can barely remember to feed myself three times a day.”

Naivete, stubbornness and unfounded optimism might not seem like positive attributes, but they’ve enabled some of these entrepreneurs to get where they are.

“People learn things that actually hinder your ability to take chances,” said Yoder, who started Quipol in 2011 and Lesson.ly in 2012. “I’m glad I did it when I did because it was naivete that really helped.”

It also helps to not have much baggage.

“Our risk appetite is much higher than someone who’s 50 with two kids sent to college,” said Garg, of Dattus. “There’s a lot less that goes wrong if you fail.”

Hutt noted that one drawback of being young is not knowing what questions to ask. France said it can be a double-edged sword, with lack of experience on one end and fresh creativity on the other.

But with seasoned mentors around, a lack of experience is not a deal-breaker.

“I think that perception has changed now [versus] where it was five or six years ago, because now it’s like everyone starting these companies is really young,” France said. “So if you’re part of an old generation that doesn’t like it, then we’re probably going to buy you out, anyway, so that’s fine.”•