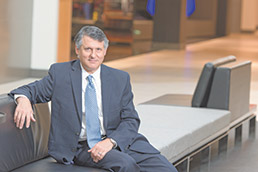 David Contis has spent much of his career with a pair of giants in the real estate business—first Chicago’s Sam Zell and now David Simon, the CEO of Simon Property Group Inc. Contis spent more than 20 years with Zell, working on assignments that took him from China to Kuwait, before David Simon hired him away four years ago to lead Simon’s mall business. At Simon, Contis, 56, has spearheaded billions of dollars in mall investments, undeterred by naysayers who think the industry is in decline.

What has it been like working for David Simon and Sam Zell?

They are both icons, but they are very different. I think the commonalities are, they are amazing strategists and they see things way in advance of others. They also have a very strong confidence in their own abilities.

Are they intimidating to work for?

I am not intimidated. I can see where people who don’t have strength in their convictions or try to waffle could see them as intimidating because both of them set very high expectations. They both have a word they use quite often—that it is a “meritocracy.”

I remember when I joined David, I asked him, “What do you expect of me?” He said, “The higher up you are in Simon, the harder you are going to work. I expect you to know the details. I expect you to be able to have flawless execution. And I expect to be kept abreast of anything I need to know about.”

What was the appeal to joining Simon?

David said, “We are at a point in our mall business where it’s really got to grow. It’s going to be transformative. We have a lot of renovations and expansions, and you’re the best at it. And I want you to come here, and I want you to lead the charge.”

He didn’t lie about it. It’s been busy. Since I have been at Simon, just the mall portfolio here has spent almost a billion dollars a year in redeveloping and transforming our assets. I think within a five-year period, we will have touched 60 of our malls. So for a mall guy who loves the mall business, it’s great.

Really for decades, people have been writing off the mall industry and saying malls are dying. What is your take on the health of the mall business?

You don’t need my take. You can just focus on the facts. It’s like Mark Twain: “Reports of my death have been greatly exaggerated.”

That’s not to say there will be a lot of new malls, because there won’t. What it does mean is, when a mall like [The Fashion Mall at Keystone]—through tearing down the bridge and expanding and adding more stores—can pick up 30 percent more retail and add better stores, we are going to do it.

So the dynamics of the business are changing, but all for the better. That doesn’t sound like a dying business to me. It sounds like an innovative business, a constantly evolving business.

Why is the growth coming from renovating and improving existing properties instead of building new malls?

First off, you have to find the right sites. If you look at what’s available today, the department stores and the anchors pretty well have positioned themselves.

Ten years from now, are malls going to be fundamentally different than they are today?

Fundamentally, you are going to see technology continue to improve the shopping experience.

If you walk into a dressing room and a lady tries on a dress, she pushes a button and the mirror shows her the dress in different colors on her. She can push another button, and the salesperson comes in with four other dresses for her.

I give this silly example. Your coffee machine breaks, which is a catastrophe. In the old days, you go to the mall, and you go to four different stores to look at all the coffee makers. You figure out which one you want, and then you go back and buy it. Not very efficient; it took you a lot of time.

Today, you go online, you research the coffee maker you want. You figure out which store has it at the price you are willing to pay. Then you go right to that store, because you still want to look at it; you want to see it work. And then you buy it. Far more efficient and a far different shopping experience than ever before.

Isn’t that technology a threat because some people will decide, “I like the coffee maker that broke. I will just go to Amazon.com and buy the same one, and Amazon will have it to me perhaps today or tomorrow?”

Let’s take your example. First of all, nine out of the 10 most productive Internet retailers have stores. Let’s talk about that coffee maker. You are right. You could go to Amazon to buy it. Or, like I did, I went to Sur La Table, so when that coffee maker breaks, six months later—no fault of my own, I think my wife did it—I take it right back to Sur La Table to exchange it. Go try to exchange something at Amazon.com. Go try to get customer service at Amazon.com.

So that’s where the stores are winning.