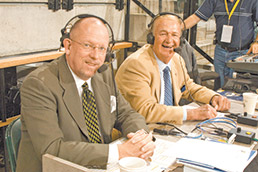 (Photo courtesy of the Indiana Pacers)

Mark Boyle has been the radio voice of the Indiana Pacers for 25 years and has broadcast more than 2,000 NBA games.Before coming to Indiana, the Minnesota native worked in Minneapolis, St. Louis and New York, where he was one of the original on-air voices at WFAN, the country’s first all-sports radio station.He has also broadcast for the NHL, NFL, Major League Baseball, and Big Ten football and basketball. Still, Boyle doesn’t want to be known as just a sports broadcaster. He has spent his summers competing in the U.S. Open Chess Tournament, performing with the Indianapolis Symphony and at Indianapolis Civic Theatre, piranha fishing on the Amazon River, and working as a barista at a local coffeehouse.

How old are you?

Whenever anyone asks me about age, I always tell them this: There are two ages—alive and dead. See if you can figure out which one I am. I never tell anyone my age because it’s totally irrelevant to me, and it should be irrelevant to everyone.

How did you get into broadcasting?

When I was in high school, I was like most guys my age: I wanted to be a big-league baseball player. But as I got older, I was self-aware enough to understand I didn’t have the skill to do it.

I loved sports and I wanted to stay in sports, and so I tried to think of other ways I could do that. I thought about being a coach, but I didn’t have the patience—I didn’t think—to be successful. My dad was in broadcasting, so I had what I guess I would call an understanding of the inner-workings of the business.

What did your dad [Joe Boyle] do?

He did a little bit of everything. He was a radio guy and he was a TV guy. At the apex of his career, he did the Minnesota Twins and Minnesota North Stars on television. And he’s the answer to a great trivia question: He is Dick Vitale’s very first ESPN broadcast partner.

What attracted you to play-by-play?

I thought at the time, and it turned out to be true, that it was the most challenging aspect of sports broadcasting. There’s no script, so you’re allowed to a degree to paint your own picture. The challenge of trying to do something and get it right without a live script, something where you don’t know what’s going to happen and you have to do it instantaneously, I thought would be very appealing.

What’s your favorite sport to call?

Baseball. It’s the most challenging of the ones I’ve done—baseball, football, basketball and hockey.

Baseball is the only one that isn’t action-driven. You have so much room to do so many things. You can be a storyteller. You can share anecdotes. You can wander off into areas that have nothing to do with baseball.

How would you describe your on-air persona?

I want someone who listens to me to know they’re going to get a good call but to be curious about what else they might get. Maybe I’ll throw out a weird opinion and if the game’s one-sided enough, you never know what you’re going to get.

Do you consider yourself edgy?

I’m edgy if you compare me to the norm. I think most guys that go on radio are more concerned about keeping their jobs. They don’t want to offend anyone. I’m not trying to offend anyone, either. But I’ll push the envelope. It stimulates me.

Give me an example of how you pushed things to the edge.

Three years ago in the playoffs, I had death threats from Miami fans. I had my own security in Miami because they took offense when I referred to them as front-running and shallow. I didn’t have to say that about the Miami fans, but it was my opinion and I felt like sharing it.

Are you the same person off the air as on the air?

I’ve seen you have written about your family and your brother’s struggle with addiction. Why is it important for you to share aspects of your personal life?

The essence of that is, I enjoy writing. It’s a little bit of a dichotomy. If you run into me in a bar and you don’t know me, I’m a bit standoffish, I’m not friendly. I really don’t like strangers.

But here I am online, sharing about my brother’s fatal disease and that … looks like two different guys. But when I’m writing on the blog, that’s part of my effort to be a communicator and to connect with my listeners and readers.

When you share something like that from the heart, that resonates with people. I had strangers come up to me in public in the months after that [post] and commiserate. The rewarding part about it was, I had more than a few people say, “You know what? When I read that, it made me call my brother or call my father.” Man, that’s pretty rewarding.

You’ve described yourself as eccentric. What are some of your most peculiar eccentricities?

I walk five miles a day, out on the streets if the weather is nice enough, and I wear Stewie Griffin pajamas—because they’re comfortable. I don’t care if I look stupid or like an escapee from the nut hatch. I do that because I like it. Sometimes when I’m on the road, I’ll be in a five-star hotel walking on the treadmill in my pajamas.

I get some strange looks. I think I take some kind of perverse enjoyment out of being unique. I don’t want to be known as Mark Boyle, sportscaster. I don’t want that to be who I am. So I try to do a lot of different things.

I did community theater one year, I did stand-up comedy last year. This year, I called minor-league baseball games. I walked 500 miles across Indiana one year. I spent a summer as a barista at Hubbard & Cravens.

If you weren’t working in this industry, what would you be doing?

I think I would have been a really good defense attorney.