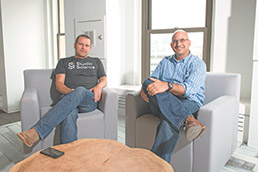 Andersen, left, and Dorsey hope to launch up to 10 companies within three to four years. (IBJ photo/Eric Learned)

Scott Dorsey and Kristian Andersen are two of the four partners at High Alpha, a company that adopts and creates technology companies.Dorsey, 48, is best known for co-founding ExactTarget, a marketing software producer that was acquired by Salesforce for $2.5 billion in 2013— the largest disclosed exit for an Indiana tech company. Andersen, 41, co-founded Gravity Ventures, an angel group that helped spawn several Indiana tech companies.Founded in May, High Alpha is focused on startups that sell cloud-based software to other businesses. It aims to rapidly cultivate such companies by surrounding them with the cash and people they need to grow quickly—and it raised $35 million in venture capital to do so.Dorsey and Andersen have worked together in the past, but not on anything quite like High Alpha.

High Alpha is designed to create tech startups, specifically B2B [business-to-business] cloud startups. How common is such a venture? Are you guys pioneers?

S.D.: We believe we’re absolutely pioneers and that’s in two ways. One is that we’ve started a company that’s entirely focused on B2B software, or enterprise cloud. There are other models that are tangential to ours that focus on B2C or e-commerce or development tools.

And the other really neat component is uniting company creation and venture funding. And that’s one part of High Alpha that we think is extraordinarily unique. We have an entity conceiving new ideas, starting companies, launching them, doing market testing, bringing entrepreneurial teams together with those ideas—but we also have a funding vehicle to give them a real head start through the first 12 to 18 months of a company’s life.

What have you been the busiest with?

So over the last three months, we’ve been hard at work building the machine that builds machines, and I think I can say with some certainty that we’ve been successful in doing that as evidenced by the fact that we’ve got our first portfolio company released into the wild, Sigster. And now the hard work of replicating that many, many times over the course of the next several years begins.

What are your projections in terms of how many companies you plan to spawn?

S.D.: We anticipate that we’ll launch eight to 10 companies over the next three to four years.

We all know the demand for software engineers is high, but how important to tech companies are the creative types and the communicators who may not necessarily know how to code?

K.A.: The software company of a decade ago or two decades ago required an enormous amount of technical [talent] in order to just get to the starting blocks. You might need 30 or more software developers and engineers to even get to a viable product. That has certainly changed dramatically.

Now, for big businesses, there’s still always going to be a big demand for lots of engineering talent. But what’s required today to get a product to market from a technical perspective, the burden is actually quite a bit lighter. You can enter the market, in some cases, with a product that was built with one person. And a team of three or four or five engineers can do today what used to require 20 or 30.

And as a result of that, what you often see in the B2B space is that you need a lot of the softer skills in order to make these businesses run. So—sales, client success, customer support, folks on staff to help you manage talent.

Is diversity in technology important to you? If so, what are your thoughts about increasing or enhancing it?

K.A.: I don’t think it’s really a matter of opinion anymore. I think the scholarship is in that, from a purely business perspective, diversity drives better outcomes. So, whereas 20 years ago, this may have been more of a discussion about altruism, humanity, fairness and civil rights, it’s kind of out of that wheelhouse now.

S.D.: I’ll add that, with respect to [education not-for-profit] Nextech, much of our focus is reaching female students and diverse populations. So with our first 12 high schools that are launching this fall, we have four IPS schools, which is fantastic. And we have a number of schools in very rural areas, and we’re really focused on bringing computer science education and opportunity to those who haven’t had it in the past.


There’s been a lot written about the impact of ExactTarget and, overall, how much progress Indianapolis has made as a tech community over the past decade. But what’s your vision for what you want Indianapolis to be in the next five or 10 years?

S.D.: You know at ExactTarget, we were thrilled to be a shining example of how a young, high-growth software company can leverage all the incredible ingredients of the region—supportive city and state environment, lower cost of operation compared to our coastal competitors, but most importantly, just the talent and work ethic and passion of the team we were able to build.

Over the longer-term horizon, I think we have an opportunity that’s very similar to what happened in sports. If you go all the way back 30 years ago, Jim Morris and lots of other city leaders helped build a strategy with sports being kind of the fabric of our city. And they said we could be the best in the world with world-class sporting events and let’s use that expertise as a way to springboard the city to new heights.

I feel like we have the same opportunity with technology. Success breeds success; we’ve got momentum.