Joe Hogsett has raised more money than his opponent. He has name recognition from decades of public service here. And he has long-standing relationships with Indianapolis’ political elite. But he says he isn’t coasting in his effort to claim an election victory this November in the race to become Indianapolis’ next mayor. Hogsett, 58, has packed his schedule full of community events for a chance to talk to people from all “four corners” of the city to try to earn their votes.Hogsett’s agenda is to increase funding on public safety, spur economic development, and help improve education. He says he wants to build on the legacy of previous mayors, but he’s not satisfied the city has reached its full potential.

What keeps you up at night?

Public safety. The most profound thing I experienced as a federal prosecutor and was key in my decision to leave and pursue this campaign was that, in far too many instances, we would prosecute young people who were not afraid of being arrested, not afraid of spending time in jail—those were just [considered] the costs of doing business. I came to believe that these young people weren’t even afraid to die. I could identify, investigate, indict, prosecute and incarcerate. But that was the limit.

We cannot arrest our way to public safety. My frustration as a prosecutor became that I really needed to broaden my ability to make change in areas that the prosecutor really has no responsibility: investing in education, investing in youth programs and services, preschool and providing summer jobs. Those are things that a mayor should be doing and must be doing.

Give us some insight into your leadership style.

I’m never satisfied that we’re doing things the best way we can. When I became the prosecutor, I made it clear I was not going to accept the status quo of the bureaucracy, much to the chagrin of a few folks. I framed and put up on the walls of the break-room areas in all the floors the phrase “Because we’ve always done it this way” with a red “no” sign. That is an unsatisfactory reason. I would not be different as mayor. I think there are some people who believe that what they have seen from city government is the most they can expect. I don’t believe that’s true.

What’s one thing you should have delegated sooner? 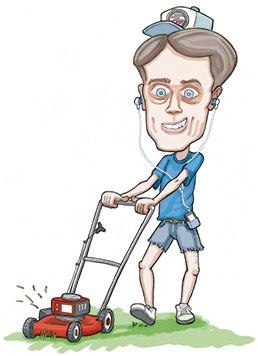 Steph, my wife, would say that I should delegate lawn-mowing. She thinks I’m a tightwad, and it’s her perspective that, with me being a lawyer and a candidate for mayor, that I don’t need to spend as much time mowing the yard as I do. I could pay the neighbor kid to mow our yard. She uses that as an example of how parsimonious I tend to be.

What’s the difference between you and your opponent, Chuck Brewer?

Why is it easier for a young person to get their hands on a gun than it is to get a high school diploma? Why are some of our neighborhoods consistently overlooked or left behind? Those are questions I’ve been dealing with for 35 years now. With all due respect, Mr. Brewer hasn’t lived in Indy for five years yet. I think that gives me a bit of a head start that maybe he doesn’t possess.

I think we have a very productive relationship that’s been genuine and warm. The mayor has been gracious enough to invite me to participate in the mayor’s [bike] races in the Indy Crit and the Mass Ave Crit. I’ve taken some bike lessons from the mayor.

Were you surprised when Ballard announced he wouldn’t be your opponent and seek a third term?

He made a very difficult decision last November not to seek a third term. As I traveled around the community last fall talking with stakeholders in all four corners, I was doing so in anticipation of considering the possibility of running for mayor against a very popular, very well-known, two-term incumbent mayor. His decision not to run was very surprising, but in retrospect, maybe it isn’t so surprising. If you look at it from the lens of what he’s been able to accomplish and how satisfied he is about his legacy, I think it makes sense.

Which Indiana leader has most influenced you?

Evan Bayh. We’ve been colleagues and dear friends for 35 years. Beyond our political alliance and personal friendship, Evan and I share the same basic philosophy toward government: doing more with less. Some call that conservative. Evan and I thought it was responsible. Taxpayers deserve the best government can give them and it’s that philosophy that shaped his administration in the Governor’s Office and it shaped my public life.

Say you have a free Saturday in Indianapolis. No plans. How do you spend it?

What Steph and I like to do is be with our kids. We really do cherish and value those wonderful days when all three can be with us, spending time together, going to the movies, taking walks or bike rides on the Monon Trail. Maybe we’d have a big steak fry or cookout in the back yard and invite our friends or our aunts, uncles and cousins over. I realize that, as mayor, things aren’t going to be easier. But I do hope that a mayor can perhaps control his calendar in a more proactive way. And if I’m an unsuccessful candidate for mayor, I’ll have every Saturday open.