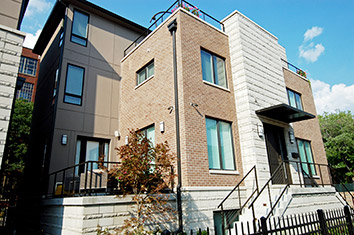 But lately, many of his listings have been changing hands at a quicker clip than they might have a few years ago. He even had a $1.6 million house at 624 E. North St. in the downtown Lockerbie Square neighborhood under contract within a week of its hitting the market.

“I do feel like the tides have changed,” Everhart said. “Empty-nesters from Carmel coming downtown don’t have a problem paying [that amount], and that’s what’s changed.”

What Everhart is experiencing appears to be a microcosm of the Hoosier housing market, which, according to the Indiana University Kelley School of Business, finally has recovered from the recession.

MORE FROM IBJ
See how home prices are up to pre-recession levels.

The school’s Indiana Business Research Center released the results late last month of a study detailing how 2015 has turned out to be a banner year for the state’s residential real estate industry.

At this time in 2014, the report said, declining home sales raised red flags that Indiana’s housing recovery might be running out of steam. The slump started in 2008 and lasted into 2012.

However, any slowdown proved short-lived, the IU researchers said.

Home sales across the state increased more than 6 percent in the one-year stretch ending June 2015 compared with the previous 12 months.

In fact, buyer demand proved so strong this summer that Hoosiers bought 9,080 existing homes in June alone—the state’s second-largest one-month sales tally in the past 12 years, according to the study.

“If you’re a consumer and you want to buy a house and you like it, you better put an offer in, because it won’t be there,” said Stacy Gillen, director of Re/Max Integra’s regional operations.

Even so, the central Indiana housing market in particular has experienced some stumbles along the way.

Pending sales of existing homes in the nine-county area dipped in September, marking the sixth straight month of declines. Yet 2015 sales agreements are still up 7.9 percent compared with the year-ago period—thanks mostly to strong sales in January and February.

Rising home prices typically serve as a leading indicator of a housing rebound and, in Indiana, the average home price reached a critical milestone this year.

The state’s home prices in the first quarter finally eclipsed their pre-recession peak, meaning the state’s home values have now recovered the ground they lost in the housing slump, the study said.

“When you look at home prices, they’re either going for exactly what [the seller] wanted for it, or more,” Gillen said.

The state’s median sales price for existing homes in 2014 increased for the third consecutive year—more than 3 percent, to $126,000. Moreover, home prices have climbed for 13 consecutive quarters dating to early 2012 and jumped 3.5 percent in the first quarter of 2015 compared with the same time last year.

In the metro area, sales prices through September were up 4.9 percent compared with the same nine months of 2014, to an average of $185,536.

Indiana’s rate of home-price appreciation ranked just 40th-fastest in the nation and was the lowest among all Midwestern states except South Dakota. But the study said it’s important to consider that states such as Michigan, Ohio and Illinois are outpacing Indiana only because they experienced much more severe price declines.

“Indiana tends to be steady Eddie,” Everhart said. “We don’t hit the high highs and the low lows.”

One of the biggest factors boosting home prices is the state’s declining foreclosure rate, which has dropped to 2.3 percent, the study said, citing the Mortgage Bankers Association.

Still, the rate remains slightly above the national average and ranks 17th-highest.

Results of the IU study aren’t all rosy, though. One area of the housing sector that continues to sputter is new-home construction. The state saw a “decent” jump in new units in 2013, but activity has faded since, IU’s research shows.

The number of building permits issued in Indiana dipped nearly 1 percent in 2014. But through July of this year, permits are down much more—11 percent—compared with the first seven months of 2014.

The primary reason is the recent slowdown in multifamily development. Apartment construction accounted for 30 percent of the state’s building permits in 2013 and 28 percent in 2014—the two highest amounts since 1986. Through July, however, permits for apartments are down 39 percent year-over-year and account for only 19 percent of all permits issued, the report said.

Apartment construction in the metro area is faring much better, particularly downtown, where building continues at a rapid rate.

For the entire year, BAGI expects the number of permits to fall 5,000 to 6,000 for the third consecutive year. Ideally, the association thinks the metropolitan market can support 8,000 to 10,000 permits—still far shy of the 13,000 issued a decade ago, before the housing meltdown.

One of the biggest factors contributing to the slumbering activity is that millennials are choosing to rent instead of buy, said Steve Lains, the builders association CEO. Building enough homes under $250,000 to appeal to first-time homebuyers also is a hurdle.

“When I look at the big picture,” said Jim Litten, president of F.C. Tucker Co. “I feel extremely good about it.”•