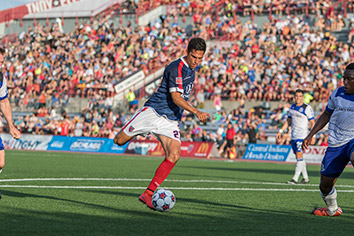 “Second seasons are always challenging,” Wilt said less than a week after the team’s season. “The tire kickers may have left, but we had a really good base. Coming out of our second season, we can find a lot of positives.”

Specifically, Wilt said, gains in sponsorship, food and beverage sales, and soccer-camp revenue made up for the loss in ticket revenue.

Sponsorship sales increased 34 percent over last season, and the list of sponsors grew from 55 to 74.

“The level of support this team has gained in two years usually takes generations to achieve,” said Wilt, a soccer veteran who was previously general manager of Major League Soccer’s Chicago Fire. “That tells me the community has really taken to us.”

But Wilt said the team remains hamstrung by its makeshift home at IUPUI’s Carroll Stadium on the far-west side of downtown, which was built in 1982 for track and field events. 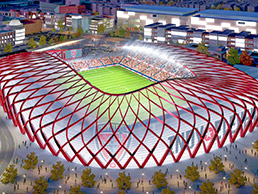 The Indy Eleven originally proposed a stadium that would have cost the state at least $80 million, but the General Assembly said no. Lawmakers have proposed a renovation of Carroll Stadium at IUPUI, where the team now plays. (Rendering courtesy of Indy Eleven)

“It doesn’t give you long-term hope or opportunities for large success,” Wilt said. “We’re open to all thoughts, but renovation of Carroll Stadium doesn’t seem to be a workable solution for the team.”

The Indy Eleven want a new stadium. But so far, the Indiana General Assembly has been reluctant to pony up the funding Wilt says he needs to make it happen.

Instead, lawmakers have suggested changes to Carroll Stadium they say will give the Eleven more money-making opportunities. But Wilt said it would be tough to turn what’s now a completely outdoor stadium into the venue the team needs to succeed.

“It doesn’t even have concourses where people can take shelter in case of rain,” Wilt said. “We had to completely evacuate the stadium twice this year when we had storms roll through.”

Team officials have gone before the General Assembly the last two years requesting as much as $87 million—for an 18,500-seat downtown stadium designed for soccer but also able to host outdoor concerts and other events.

Each time, a bill containing measures for either a new stadium or major improvements to the team’s existing home has died. Wilt said team officials will be back for a third try in 2016. They might not get a warm reception.

“I don’t expect there to be an appropriation for something like this unless they do it during a budget session, and that won’t be until 2017,” said Senate Appropriations Chairman Luke Kenley, R-Noblesville. “I don’t think we should be doing something that has an impact on the budget during a non-budget year unless it’s an emergency.”

Even if a stadium bill did make it to the Senate this year, Kenley said he doesn’t think it would get wide support.

In February, the Indiana House approved a bill sponsored by Rep. Todd Huston, R-Fishers, that included $82 million for a soccer stadium to be built at an unspecified downtown site. But the Senate modified the bill to a measure using tax money captured from the stadium and a downtown hotel proposed by Indy Eleven owner Ersal Ozdemir to fund a $20 million renovation of Carroll Stadium.

At the 11th hour, a proposal bumped the renovation funds to $25 million.

“I thought we had a good proposal last session, one that benefited the state, Indiana University and the team, and the team didn’t like it,” Kenley said.

A representative for Huston said he was not available for comment, but this spring, he told IBJ he would not be surprised if another stadium bill surfaced in the 2016 General Assembly.

To get serious consideration for a new stadium, Kenley said, Ozdemir would have to make a bigger financial contribution to the project.

“The concern all along is, there needs to be a substantial investment made by the team’s owner, and so far that hasn’t been done,” Kenley said.

There have been questions as well about the team’s rosy projections for ticket revenue and attendance, which would affect the amount of tax revenue available to repay the project’s bonds.

Despite the decline this year in attendance, which averaged about 9,800, Wilt is confident the team could fill an 18,500-seat venue for its 15 regular-season home games.

“You can’t even compare what the experience—with better sight lines and seating and other amenities—would be in a new stadium compared to where we play now,” Wilt said. “Absolutely a new stadium would help us draw more people.”

Even without a new stadium, Wilt said, the Eleven this year made major inroads in three primary target markets: millennials, Hispanics and suburban soccer families.

“We’ve made gains through marketing and outreach in every significant category,” Wilt said, “and we think that’s going to continue to pay dividends.”

In the short term, though, the Eleven lost ground during a year that league-wide attendance in the North American Soccer League—in which the team competes—grew 10.6 percent. The team sold just more than 6,000 season tickets, compared with 7,000 (a number capped by the team) last year. The NASL season runs from April to October, broken into spring and fall divisions.

Still, the Eleven led the NASL in attendance by a wide margin for a second consecutive season. League-wide attendance this year settled at about 5,900. The Eleven sold out three of five games at the 10,465-seat Carroll Stadium during the spring campaign and were above 9,000 in nine of 10 games in the fall. A Wednesday game on Aug. 19 that attracted only 8,500 fans dragged down attendance.

Last year, the team sold out all 15 home games.

NASL Commissioner Bill Peterson said the Eleven “is a team we use as a model.”

“I’ve been to Indy for five matches and the atmosphere there is fantastic,” Peterson said. “You can feel it. They have an engaged fan base, and that’s critically important.”

The Eleven also is a league leader in number of sponsors and sponsorship revenue, Peterson added.

“From a business standpoint, they’ve done everything right,” he said. “They’re building a strong base for a long and bright future.”

This year, the team saw a decline in merchandise sales but an increase in food and beverage sales after offerings were revamped.

“We had some really great food specials,” Wilt said. “Some of them were maybe too much of a hit. We ran out of corn dogs on corn dog night before the game even started.”

Wilt said the team is not yet profitable, “but we’re close.” The Eleven operate “at a small deficit, not including capital projects,” he said.

The team carries 22 to 26 players on its roster and, according to sources with knowledge of the NASL, has a low-seven-figure player payroll.

The Eleven failed to make the NASL’s four-team playoff this year after star player Jose Kleberson was plagued by injuries that kept him out much of the season. The team finished the season in ninth place in the 11-team NASL.

But the team improved this year after it fired Head Coach Juergen Sommer and replaced him with Tim Regan in early June.

“We had a lot of eggs in one basket with Kleberson,” Wilt said. “Certainly, winning helps sell, and we didn’t do that in the spring season.”

Next year, he said, the Eleven will spread its money around to attract more quality players. The future for Kleberson, the Eleven’s highest-paid player, is still being determined, Wilt said. Sources close to the team don’t expect him to be around next season.

“We think our attendance decline was a matter of pricing rather than a function of demand,” he said. “The low- and medium-priced tickets continue to sell out.”

Wilt said the team is being careful to keep “the barrier of entry comparable to a movie ticket.”

Discounts will be offered to season-ticket buyers, with deeper discounts for purchases by Dec. 31. The team is also installing three-month and nine-month payment plans to spur season-ticket sales.•