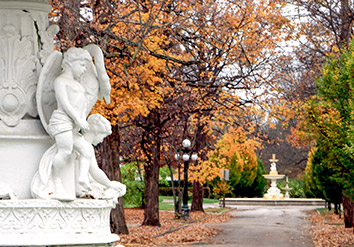 The sleepy Woodruff Place neighborhood east of downtown has become an Indianapolis trailblazer by accomplishing what two of its larger and trendier counterparts couldn’t.

Leaders of the Woodruff Place Civic League over the past two years have quietly amassed the support of their neighbors to create what’s known as an Economic Improvement District, to help fund the restoration of some of its historic infrastructure.

Many of the charming but aging fountains, streetlights and statues adorning the three north-south esplanades within the neighborhood date to the 19th century. James Woodruff plotted 265 parcels following the Civil War to achieve his vision for what then was a gated community incorporated in 1876 as a town.

Fast-forward nearly 140 years and the infrastructure is crumbling. Though the city of Indianapolis annexed Woodruff Place in 1962, budget constraints have left neighborhood residents to fend for themselves on repairs. That’s difficult when relying on occasional grants to bolster a $25,000 annual budget.

“Part of the squeeze is that the Parks Department is the reluctant heir to a lot of the infrastructure,” said Tom Abeel, 67, who moved to Woodruff Place in 1986.

Abeel and fellow resident Will Pritchard, 47, led an exploratory committee to garner support for an EID. Mayor Greg Ballard on Oct. 26 signed off on the ordinance following approval from the City-County Council.

An EID works similarly to a homeowners’ association, but collects property taxes rather than dues. In Woodruff Place, the new set rate of assessed value equates to an owner of a single-family residence paying an additional $165 in yearly property taxes. The assessment is expected to raise $45,000 annually and a total of $675,000 through the 15-year life of the EID.

In those instances two years ago, the discussion created a sharp divide among local businesses and property owners who argued whether the thriving areas even needed the additional investment.

“In Woodruff Place, they could rally around their identity,” Miller said. “They could see directly what value they got from it, and that was crucial.” 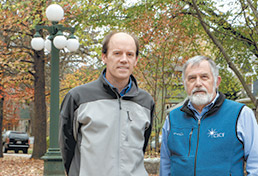 “We said in the very beginning that we wanted it to be an overwhelming majority,” Pritchard said. “That’s part of the reason it took so long.”

They mounted an intensive door-to-door campaign within the neighborhood, which extends from Michigan Street to the south to 10th Street to the north and from Tecumseh Street to the east and the Arsenal Technical High School campus to the west.

The three boulevards in between—Woodruff Place West, Middle and East drives—give the neighborhood its character. They boast three large fountains—one on each esplanade—and six smaller ones.

The neighborhood will capture funds from the EID starting with the 2016 spring tax bill. Work likely will start with one of the fountains. The one farthest west is leaking from the base and needs the most attention.

Abeel and Pritchard said repairing a single fountain would cost at least $100,000. They haven’t been refurbished since Lilly Endowment Inc. provided a major investment in the mid-1970s.

The two neighborhood leaders hope they can leverage the EID money with matching grants from the city’s Department of Public Works. Or, at the very least, the city could provide in-kind services to conduct engineering studies on the fountains.

“The city just doesn’t have enough money to support all of these things,” Pritchard said. “It’s a great solution for us.”

EIDs are widespread throughout the United States, with about 430 nationally and a handful in Indiana.

Woodruff Place began exploring the option seriously after the Parks Department in 2010 informed neighborhood leadership that it no longer could afford to maintain the fountains. The neighborhood already was maintaining the historic streetlights after the city terminated maintenance in 2005.

The city still owns the infrastructure, however, except for the town hall. The neighborhood’s foundation bought the building in 2001. That same year, Woodruff Place became a historic district and is one of a dozen in the city protected by the Indianapolis Historic Preservation Commission. It’s been on the National Register of Historic Places since 1972.

The neighborhood has experienced other challenges. Several of the homes, built in the Victorian style, were divided into apartments following World War II to satisfy housing needs of returning veterans. Others have not kept pace with Father Time.

Residents, however, still consider it a hidden gem tucked between two major thoroughfares not far from downtown.

“I think it’s one of the prettiest neighborhoods in the city,” Pritchard said.•