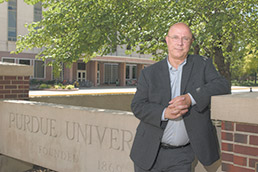 University achievements during tenure: With a team of nearly 500 in central computing and another 250-300 spread throughout the school, McCartney’s challenges are writ large. One big achievement was developing community clusters. McCartney explained that, in most large research universities, departments run “little machines and run them when they need to, with the machines sitting idle most of the time.” He compared it to the Las Vegas airport having a de-icing machine for the one day every two years it might be needed. His solution was to centralize the hardware. “It wasn’t well-received at first—most were skeptical that central computing could be relied upon—but it’s been incredibly effective; every computist on campus uses it.” The results were persuasive enough to win over some of the biggest skeptics, including one faculty member who had said—and titled a program—“I’d rather remove my appendix with a spork than let you people run my research computing.” McCartney also led the development of the annual Dawn or Doom symposium, which looks at the use and potential misuse of technology in the future. (This year’s speakers include best-selling author Dave Eggers.)

Recent tech problem solved: When an Intel senior vice president mentioned the difficulty of hiring contract engineers for short-term work, McCartney realized that Purdue, which has more undergraduates in engineering and engineering-related fields than any other university, could help with that. He launched the Purdue Pathmaker Internship Program, which now has 11 corporations and the state of Indiana employing students part-time to perform entry-level engineering and technical jobs.

Challenge faced or achievement that only tech people would understand: “Most of the interesting problems are around scientific storage,” McCartney said. “Everybody talks about cloud computing—the difficulty is when doing scientific computing and you have large amounts of data and have to have the storage very close to the compute engines.”

The appeal of academia: “I think we do a really important job here,” McCartney said. “I’ve drunk that Kool-Aid. Public higher education is a noble cause.”

First computer: “I have more power in my phone than I had in my first work computer, a DEC PDP11/34.” At home, his first was an Amstrad CPC 464, “a weird little machine whose storage device was an audio tape that you plugged into a television, basically. You could do about three things with it, none of them useful.”

Education: bachelor’s and master’s from National University of Ireland; diploma in advanced computer programming and diploma in systems analysis from Trinity College, Dublin; doctorate from Purdue

The road to here: Directly after graduating, McCartney was hired to work in the computing center at his university while chipping away at his master’s degree part time. He moved to the United States in 1986 (“Imagine … my port of entry was South Bend, Indiana”), worked at Notre Dame, then Purdue, with time out for a stint at the Wharton School. He has been a U.S. citizen since the late 1990s. “I fell in love with America,” he said. “One of the great things Americans have is a sense of optimism. I grew up in a country where you present an idea and they’d say, ‘We tried that in 1623.’”

Mentor/inspiration: McCartney quoted from “In Place of a Curse,” a short poem by John Ciardi: “Beware the calculations of the meek, who gambled nothing, gave nothing, and could not receive enough.” He added, “Tech is an all-in kind of game, if you are doing it right. I like people that drink deep of the cup. Sippers are just annoying.”

On recruiting: “In the last five years, technical hiring has become a lot more competitive. Tech firms realize that, if they aren’t speaking to students as freshmen or sophomores, they won’t be able to grab them as juniors and seniors.” That led to the creation of Pathmakers, which offers the equivalent of extended internships where students work with companies for years. “If you have a sexy brand name like Pixar, you don’t need this,” McCartney said, “but almost everybody else does.”

Favorite gadget: His laptop, which is “just a Dell XPS 13.” In addition to working on it, he likes the game Civilization 4. “A number of academics play that particular version.”

My job would be easier if … “I could be more effective in demonstrating the massive changes that ubiquitous, reliable and cheap technology is having on humanity, our economy and, in particular, higher education.”