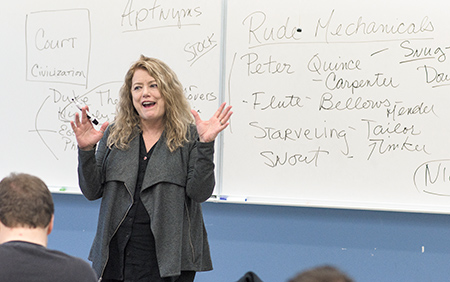 Scholars and Shakespeare buffs around the world are heralding the arrival of The New Oxford Shakespeare, a mammoth multi-volume project that includes groundbreaking revelations about what the Bard wrote and with whom.

But while the attention should be a feather in the academic cap of IUPUI, where most of the scholarly work took place, the NOS is instead at the center of a he sayeth/she sayeth battle between the professor who brought it to Indy and the school that hosted it.

IUPUI professor Terri Bourus, who serves as one of the four general editors for the NOS, said support for the project disappeared in its last stages, cheating the school and its students of the opportunities—such as a Shakespeare-focused center—that could have come with the publication of such an important literary series.

“They cut us off,” Bourus said of IUPUI. “They lost a first-class, world-class Shakespeare center.”

Not so, claims IUPUI. School officials say they only agreed to support the seven-year program through the 2016 launch of the NOS—which the school did to the tune of about $1 million. They said they never promised Bourus new programs, staff or other support after the work was done.

To paraphrase the Bard, the course of academia never did run smooth.

What’s the big deal about yet another collection of Shakespeare’s plays?

In the world of literary scholarship, a great deal, especially when the collection not only approaches the existing material in innovative ways but also redefines what is commonly understood to be included in the Shakespeare canon.

The NOS team determined, for example, that Shakespeare’s contemporary, Christopher Marlowe, deserves a co-writing credit on all three “Henry VI” plays and that Shakespeare contributed to “Arden of Feversham,” a play previously attributed to Anonymous. The team came to those conclusions through computer-assisted study of phrases common to Shakespeare and his peers and the quirks of each writer’s use of grammar and syntax.

“Previously, we had no way to discern those ‘fingerprints,’” Bourus said. “But now we do, thanks to massive linguistic databases of early modern playwrights.”

The authorship discoveries made at IUPUI have led to news stories from the BBC to Entertainment Weekly.

Gail Kern Paster, editor of Shakespeare Quarterly and director emeritus of the Folger Shakespeare Library in Washington, D.C., called the NOS revelations “big news,” adding that they put Marlowe—thought of as Shakespeare’s greatest rival—in collaboration with him.

“It matters that artists and poets and dramatists get proper credit for their work in the historical record,” she said, noting that the NOS is also valuable as teachers around the world look for the best, most complete work for their classes. (Big plus: The NOS also comes with access to an online edition.)

“Shakespeare is the cash cow of drama,” Paster said. “To the degree that Shakespeare’s name is attached to a play, people are much more interested in putting it on.”

Act I: Shakespeare comes to IUPUI

Bourus was invited to join the NOS project after its general editor, Gary Taylor, a professor at Florida State University, heard her deliver a paper at a Shakespeare conference in Washington, D.C., in 2008. At about the same time, Indiana University President Michael McRobbie invited Bourus to migrate from her teaching post at IU Kokomo to IUPUI.

She was interested in Taylor’s offer, but held off until she settled in Indianapolis. Here, she found a welcome reception for the project from William Blomquist, then the dean of IUPUI’s School of Liberal Arts.

“We were excited for her and thought it would be a great thing for IUPUI,” recalled Blomquist, who remains a professor at the school. “We agreed to support what came to be known as the New Oxford Shakespeare Project. And, as it turned out, most of the editing work was done here at IUPUI.”

That support included a basement suite of offices and a team of post-doctoral scholars and undergraduates, who set to work not only analyzing the plays but also deciding how the NOS would differ from other Shakespeare collections.

“Terri is responsible for many of the innovative features,” Taylor said. “The performance notes in the margins of the plays, the really original format of the introductions with lots of varied quotations instead of a critical monologue, [and] the display of original music.” Taylor also credited Bourus with the decision to feature photographs of productions—including some from Indianapolis that were part of a Bourus pet project, Hoosier Bard. 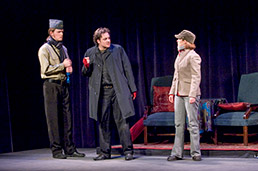 “Young Hamlet,” an early version of Shakespeare’s play, was among the theatrical experiments staged by Hoosier Bard. (Photo courtesy of Emily Schwank)

To test some of her theories about early productions—and in an effort to add live theater to IUPUI’s offerings—Bourus created Hoosier Bard to delve into some of the more obscure Shakespeare-affiliated works. Hoosier Bard used local actors and student talent to stage such productions as “Young Hamlet,” an early version of the famed tragedy, and “The History of Cardenio,” a play that—thanks to the NOS—now credits to Shakespeare and William Fletcher. A documentary on the production, “Shakespeare Lost, Shakespeare Found,” was produced by WHYY-TV in Philadelphia and aired on public television stations.

IUPUI seemed fully behind Bourus as the project continued. “Cardenio” was the centerpiece of the 2012 opening of the renovated Campus Center Theater. At the opening, McRobbie said the theater is “a representation of the depth of the university’s commitment to training the next generation of scholars, performers and artists. This new facility will help nurture their talent and build their dreams.”

He added, “This theater is a tribute to [Bourus’] vision and leadership.”

And three years ago, a press release from the university about the NOS project quoted her as saying: “This kind of research is key to the public perception of the campus and its commitment to Shakespeare. Publication of the edition will be a huge coup for IUPUI, for The New Oxford Shakespeare and for Hoosier Bard Productions.”

Then, the storm hit.

In 2014, IUPUI announced Blomquist would be stepping down as dean. Bourus said the School of Liberal Arts was being scrutinized for spending too much money. She said that, after the new dean, Thomas Davis, came on board, she was told her funds would be cut as of July 1, 2016.

Bourus recalled Davis’ saying “it was his decision and nobody else’s.”

In late June, she said, “the post-docs dispersed, the staff and student assistants were all let go, the offices were shut down, and Gary Taylor had to ship his huge personal Shakespeare library back to Florida.” Bourus was reassigned to the English department.

Davis did not respond to numerous requests for an interview. But Liz Joss, assistant director of strategic communications, said IUPUI maintained its commitment to support the program up to the launch of the NOS.

IUPUI even featured the project last month in a series of stories highlighting its strategy initiatives. It reported that Bourus led an IUPUI team of four post-doctoral fellows, 13 graduate students and 67 undergraduates on the project.

But Bourus sees the situation much differently.

She said she was shocked by what she viewed as a sudden turnaround in IUPUI’s support. “The vision was that I would create a center for early modern studies at IUPUI, a place for grad students to come and learn how to edit, hands-on, and have an opportunity to work with some of the best in the field.”

She said the plan was to hold the book launch for “The New Oxford Shakespeare” in Indianapolis with scholars, press and a Hoosier Bard production.

Taylor said he was at some of those early meetings. “I was brought into the conversations with IUPUI to talk about the kind of global impact the edition would have, and how the connection with Oxford University Press would give both the English department and the College of Liberal Arts a great deal of visibility and credibility as a center for research in the humanities,” he said.

“The idea was that IUPUI would be able to build on the visibility and importance of the launch of the NOS to secure grants and gifts to build Shakespeare studies and/or an accredited theater arts program at IUPUI,” Taylor said.

Blomquist acknowledged that there were talks about continuing the program after publication, but said they were just talks.

“Terri had a number of things she wanted to do after it was done,” he said. “All I could say was, ‘When the time comes, we’ll have that conversation.’”

And Joss dismissed the idea that the NOS would have been unveiled in Indianapolis even if IUPUI had extended support for the project—rather than in London, where it eventually did launch in the company of such luminaries as Dame Judi Dench.

Bourus denies that IUPUI invested $1 million in the project.

“I applied for and won two major grants as well as donor gifts,” she said, which helped keep the spending below the budget allocated by the university. “We never even came close.”

And she said that half of the $1.6 million used to renovate the Campus Center Theater came from an anonymous donor who became interested after seeing a play Bourus presented. That’s something school officials dispute.

Camy Broeker, IUPUI’s vice chancellor for finance and administration, said the university could find no record of such a donor for the build-out of the theater, which is currently being used primarily for movie screenings.

Still, Florida State’s Taylor is bewildered about why IUPUI hasn’t continued the program and why it isn’t making a bigger deal about the publication of the NOS.

“I have worked in five different universities,” he said, “and I have never seen anyone spend so much money on a project and then drop it just as it was about to deliver the kind of ‘branding’ publicity and attention that is the prime motive for university investments in projects of this kind.”

No matter the back story, the fruit of the Bourus team’s labor is a series of books likely to have a major impact on how the world thinks of Shakespeare.

“He was never a solitary genius,” said Shakespeare Quarterly’s Paster. “He worked as an actor and as a playwright in a group of other actors. … It makes complete and total sense for us to think of him as part of an ensemble.”

Released in December, the 3,382-page “Modern Critical Edition” is the NOS volume most likely to get seen beyond the academic world. But it’s only part of the project. Still on the way early this year is a two-volume “Critical Reference Edition” with the primary texts intact—including original spellings, punctuation, and inconsistencies. There’s also an “Authorship Companion,” with essays explaining the ideas, evidence and methods used to create the NOS.

While Hoosier Bard no longer exists, some of its key players went on to launch Eclectic Pond Theatre Company, which not only offers full productions of Shakespeare plays in a variety of other Indianapolis locations, but also such playful shows as “Drankspeare,” described as “Shakespeare under the influence.”

And this semester, Bourus is teaching Shakespeare classes through the IUPUI English department.•