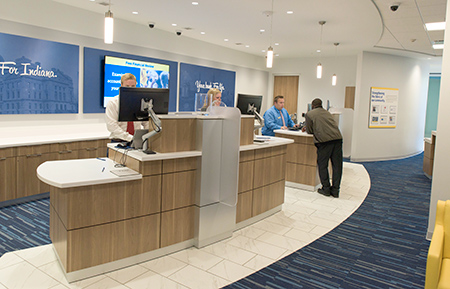 It’s a hot topic among bankers now: In an age of digital banking, where do bricks-and-mortar branches fit in?

The challenge at hand: balancing both.

Everyone is trying to figure out what the “branch of the future” looks like and what role it should play, said David Findlay, president and CEO of Lake City Bank. 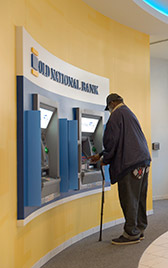 Based in Warsaw, Lake City has 49 offices, including five in the Indianapolis area.

As banks tackle the issue, they are evaluating the size and location of their branch network and reimagining what happens in branches and how.

Over the past seven years, Brown said, in-bank transaction volumes have declined about 5 percent a year. That decline will likely accelerate as older customers—heavy users of in-branch services—are replaced by younger, more digitally oriented ones.

At the same time, Brown said, even diehard online banking customers don’t want to see branches disappear. They might rarely or even never go inside, but many want to know the branches are there if they need them. 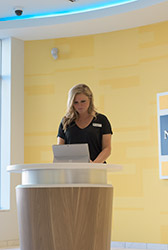 And banks say many customers still head to a branch for major transactions: taking out a mortgage, opening an account or seeking financial advice.

In response, banks are starting to design their branches differently.

When Old National Bank moved its downtown office to Monument Circle several months ago, it designed that space with a number of new features.

Except for the branch manager, employees don’t have a set office or work station. Instead, they all carry notebook computers so they can work from various spots. The employees are also cross-trained; the same person who cashes your check can help you open an account.

There’s a welcome center near the front door where employees greet customers, and a “tech bar” with built-in digital screens that offer information about bank products and services.

The branch uses a cash recycler—technology that looks like a small safe and can securely accept and dispense cash. Because the cash is more secure, the teller area is more open and employees can move around the office more freely.

High-tech ATM machines mean customers can deposit stacks of cash without having to count it. The ATMs also have video conferencing capabilities, though the bank hasn’t activated that technology yet.

“Clients use banking centers much differently than they did five years ago,” said Ray Webb, a retail sales executive and senior vice president at Old National. “This new banking center and the way we use it are in response to this change in client behavior.”

Old National’s Fletcher Place branch, which also opened recently, has many of the same features, Webb said. And more are in the works. All, he said, “will model the intent of these first two in Indianapolis, with several scheduled to be built this year in Indiana, Wisconsin and Michigan.” 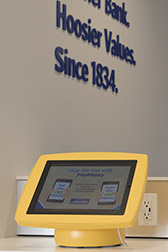 … and tech stations are part of the new branch concept. (IBJ photo/Eric Learned)

Findlay said Lake City saw its branch transaction volume drop 15 percent from 2011 to 2016, but having physical branches is still important. In fact, the Greenwood branch occupies more than 7,000 square feet so it can handle future growth.

“We don’t believe you can be truly committed to a market and a community without a physical branch location in that market,” Findlay said. “While it’s becoming decreasingly so, the commercial customers that represent 90 percent of our borrowers expect their bank to have a physical presence and commitment in their communities.”

While banks are reconfiguring their branches, they’re also rethinking their locations and size.

Architect Jeffry Klump, president of Cincinnati-based K4 Architecture and Design, said bank branches are about 2,500 square feet on average. And some banks are looking at even smaller spaces.

“We’ve been asked to look at [designing] branches of 1,200 square feet,” Klump said.

Another trend Klump sees: The move toward a “hub and spoke” system, where a bank might have one larger office in a market, surrounded by smaller offices. Staffers with specialized expertise in areas like commercial banking, credit or mortgage lending are based at the main office and travel to the smaller offices to meet with customers by appointment.

Amid all these changes, banks also say they are mindful that customers want to have a good experience in a branch.

“Today’s the age of the customer,” said Fifth Third Bank retail executive Tim Tierney, whose territory includes most of Indiana and parts of Illinois and Kentucky.

In the past, Tierney said, customers judged a banking experience by comparing it to their previous banking encounters. These days, customers compare a branch visit to their last customer experience—wherever that might have been—which raises the bar.

“That last experience might have been getting coffee at Starbucks,” Tierney said. “As the service level has increased in other industries, the expectations have risen for us.” 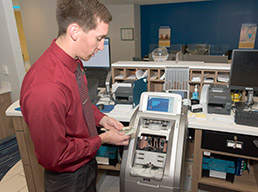 In banks, Tierney said, customers want to be greeted by name and they want the bank to give them useful financial information without a hard-sell approach.

Fifth Third is in the early stages of a new deposit-handling system meant to improve customer service in yet another way. A pilot version of the system launched this month in Indianapolis and will later roll out to Fifth Third’s entire network.

Under the new system, Tierney said, tellers scan a customer’s check right away, rather than sending it to back-office workers for scanning. Once the system is fully operational, deposits will be more quickly available for withdrawal.

Even as banks work to reconfigure their branches, it’s also true that the sheer number is in decline nationwide.

From 1997 to 2009, bank consultant Brown said, banks were on an expansion spree. During that period, the number of U.S. bank locations increased from 81,000 to 100,000, not including in-store supermarket locations.

Since then, that number has been shrinking as banks consolidated and customer traffic patterns declined. Brown said banks have about 91,000 branches nationwide now. He expects that number to fall to 83,000 by 2023 but thinks that’s still too many. “The right number’s probably close to 50,000, not 80,000,” Brown said.

Still, closing branches is a difficult challenge for a few reasons, he acknowledged.

For one thing, most banks track customer activity in a way that makes it hard to tell which branches are least profitable.

Closing branches can also hurt morale and create a negative perception among customers, especially if a bank closes too many branches too fast. “Closing branches is like losing,” Brown said.

Branch offices are also a way for a bank to stake its flag—to announce its presence and show its local commitment.

“There’s an intangible factor to it,” Lake City’s Findlay said.

As in-branch transactions have declined in certain markets, he said, Lake City has reduced staffing and cut hours as needed so it can maintain a local presence.