Home » BEHIND THE NEWS: Inside the issues that grounded Celadon 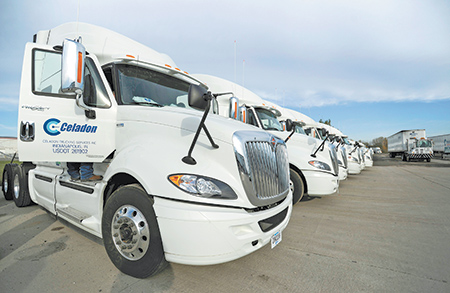 Whatever becomes of Celadon Group Inc. in the wake of auditor BKD LLP’s declaration that its financials “should no longer be relied upon,” the company’s management team already should have learned a powerful lesson: Keep it simple.

The trucking firm’s financial statements became so difficult to decipher after it made a huge bet on the truck-purchasing-and-leasing business in 2014 that the Securities and Exchange Commission a year ago sent three letters to Celadon seeking clarifications.

Public company investors deserve transparency in accounting. But Celadon’s disclosures became decidedly more opaque after October 2015, when it set up an off-balance-sheet joint venture called 19th Capital. After Celadon bought new tractors and lined up truckers to lease them, it sold the trucks and leases to 19th Capital.

Celadon executives owned stakes in 19th Capital entitling them to a share of its earnings—a potentially lucrative arrangement that could spur management to favor the JV over Celadon itself. “This presented a troubling conflict of interest because management was incentivized to maximize 19th Capital’s profits … potentially to the detriment of CGI and its shareholders,” Jay Yoon of Summit Ridge Partners wrote on the investing website Seeking Alpha in January.

Yoon has been questioning the company’s accounting publicly since July 2016. Echoing his concerns in recent months has been the investment firm Prescience Investment Group, a so-called short-seller. Such firms profit when a stock falls rather than rises—a business model that gives them a strong incentive to publicly bash companies they target in a quest to drive down the share price.

Yoon and Prescience unleashed a round of accounting attacks after Celadon in December terminated the 19th Capital joint venture, which it had formed with the Pennsylvania-based private equity firm Larsen MacColl Partners, and shifted the leasing-related assets on Celadon’s balance sheet and in 19th Capital into a new JV formed with Canada-based Element Fleet Management.

According to Yoon and Prescience, Celadon management collected more than $4 million for their 19th Capital shares. The two are incredulous that 19th Capital was deemed to have any value, given that it operated during a span when softness in the trucking industry caused used-truck prices and demand for truck leases to tumble.

In an April report, Prescience called Celadon “a house of cards” that “used a series of off-balance-sheet transactions, manipulative accounting practices and material misrepresentations to … hide catastrophic losses.”

The reports from Yoon and Prescience have helped feed the angst among Celadon investors that’s been building in recent months, culminating in the company's May 1 announcement that President Eric Meek was stepping down and that BKD had determined that the financial statements for the fiscal year that ended last June and the two subsequent quarters “should not be relied upon.”

The noncompliant financials, meanwhile, put Celadon into default with lenders—a predicament the company was able to remedy but at a steep cost, agreeing to a host of operating and reporting restrictions.

On top of all that, Celadon said it expected to report a $10 million loss in the quarter that ended March 31 due to eroding performance in what it calls its “irregular route” business, through which it trucks cargo where needed, rather than on set routes.

All of this freaked out investors, giving them reason to embrace the narrative of Prescience, which cast Celadon as the next Enron, the Houston company that crashed in 2001 after committing a litany of accounting obfuscations. Celadon stock, which traded as high as $27 two years ago and opened 2017 at $7.15 per share, plunged 55 percent on May 2 to close at $1.85. It’s since recovered some lost ground, leaving shares at around $2.

On a conference call May 3, CEO Paul Will said Celadon is committed to a back-to-basics approach after several years of rapid growth through acquisitions and diversification. The rapid expansion swelled revenue from $599 million in fiscal 2012 to $1 billion last year.

Along the way, however, debt ballooned, reaching $451 million at the end of the latest fiscal year, narrowing the margin for error. To get breathing room, Celadon is negotiating a new lending agreement. It also plans to mortgage some debt-free properties, as well as sell and lease back others.

Further, Celadon has hired the Arkansas-based investment banking firm Stephens Inc. to evaluate corporate strategy. The hiring of such firms sometimes signals a company has put out the for-sale sign.

On the May 3 call, Chief Financial Officer Bobby Peavler said, “To the extent additional strategic steps are required, Stephens has been engaged to assist us with evaluating these matters. As a public company, we will consider transactions that are in the best interest of our stockholders.”

Critics say the company got itself into this predicament with an outsized bet on the truck-leasing business.

Celadon’s Quality Cos. leasing unit, which had 750 tractors under management as of June 2013, swelled that number to 4,900 by June 2015. By a year later, Quality had placed initial orders for 13,000 tractors with an aggregate purchase price of $1.5 billion.

During 2014 and most of 2015, Quality resold its tractors almost exclusively to Element Fleet Management, the same firm that’s partnering with Celadon on the new joint venture. Celadon said late last year that Element’s purchases have totaled $740 million.

But there were onerous strings attached—including that Celadon would cover up to 10 percent of any losses suffered by Element on purchases and that it would cover any shortfalls on lease payments Element received from truckers. With market conditions deteriorating, depressing used-truck prices and leaving some tractors slated for lease sitting empty, those provisions came back to haunt Celadon. By June 2016, it had forked over $74 million to settle its obligations under the loss provision. By that point, it also had paid $32 million to cover lease shortfalls and remained on the hook for future shortfalls.

Celadon has said that one of the benefits of the new joint venture with Element was that it canceled the requirement that it cover lease shortfalls. In fact, Celadon said the deal allowed it to recoup the $32 million in shortfalls it previously paid.

But Prescience and Yoon, after scrutinizing the company’s SEC filings, concluded that Celadon did not really get the $32 million back and that the company overstated the value of the joint venture by at least $16 million—a move they say made Celadon’s financials appear stronger than they really were.

Yoon asserts the joint venture actually is worthless, in part because the tractors Element put into the venture were depreciated at just 6.4 percent a year—way too low given the weak market conditions and far less than at least one competitor uses.

BKD notified the company on April 25 that it no longer stood by the earlier financial statements because “additional information … has come to our attention” related to “revenue equipment held for sale”—a reference to the value of trucks involved in Celadon’s leasing business.

BKD said that, after requesting explanations and supporting documentation from Celadon management, “we have been unable to obtain sufficient appropriate audit evidence to provide a reasonable basis to support” the earlier financials.

Celadon said in a press release that BKD had taken a fresh look at the company’s books at the behest of its board’s audit committee, which asked the CPA firm “to perform additional procedures on the transactions” rather than waiting for the next regular audit later this year.

BKD’s chief risk officer, Michael Wolfe, declined to discuss the company’s dealings with Celadon, saying his firm is not at liberty to share confidential client information. Celadon did not provide an estimate on when financials would be reissued.

BKD, a regional accounting firm headquartered in Missouri, stepped in as Celadon’s auditor after the company dismissed KPMG in October 2013. KPMG a year earlier had dinged Celadon for a material weakness in its internal controls—a finding that led the company to restate financials for fiscal 2011 and two quarters of 2012.

As Celadon has grown through acquisition and formed joint ventures, the complexity of BKD’s work for the company appears to have escalated as well. In the fiscal year that ended last June, BKD pocketed $693,000 in fees, according to a company proxy statement. That’s $444,000 more than it received two years earlier and more than double what KPMG had been getting.•